How To Make the Best Ice Cream at Home. Knowing how to make a basic vanilla ice cream will serve you well in life. 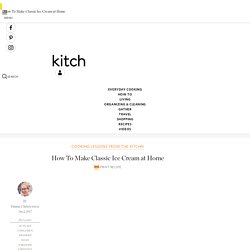 This is what makes a slice of birthday cake, a wedge of Thanksgiving pie, or even a simple banana split on a hot summer night feel extra special and extra memorable. Plus, once you master this recipe, you're well on your way to inventing your own flavors and making the ice cream of your dreams. Vanilla ice cream with an egg custard base isn't particularly hard, but it can feel that way the first time you make it. Here's a straightforward guide through all the tricky steps so you know exactly what to do and what to expect along the way. Magic One-Ingredient Ice Cream 5 Ways — Peanut Butter, Nutella, and More Recipes from The Kitchn. Several years ago, tipped off by my sister, I tried a magical little kitchen trick for the first time. 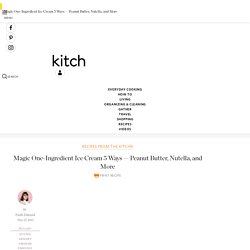 I froze chunks of raw banana, then buzzed them in my food processor. Suddenly, out of nowhere, these gritty frozen pieces of fruit turned into ice cream. V e g a n D a d: Strawberry Ice Cream. Strawberry season has come to the North! 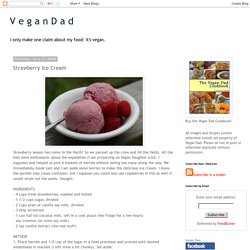 So we packed up the crew and hit the fields. All the kids were enthusiastic about the expedition (I am projecting on Vegan Daughter a bit, I suppose) and helped us pick 6 baskets of berries without eating too many along the way. We immediately made jam and I set aside some berries to make this delicious ice cream. I know the garnish may cause confusion, but I suppose you could also use raspberries in this as well (I would strain out the seeds, though). INGREDIENTS- 4 cups fresh strawberries, washed and hulled- 1 1/2 cups sugar, divided- 2 cups plain or vanilla soy milk, divided- 3 tbsp arrowroot- 1 can full fat coconut milk, left in a cool place (the fridge for a few hours)- soy creamer (or more soy milk)- 2 tsp vanilla extract (the real stuff)

Friday, Black Friday. Lock the doors and hide the credit cards; it’s the scariest shopping day of the year! 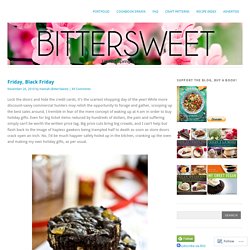 While more discount-savvy commercial hunters may relish the opportunity to forage and gather, scooping up the best sales around, I tremble in fear of the mere concept of waking up at 4 am in order to buy holiday gifts. Even for big ticket items reduced by hundreds of dollars, the pain and suffering simply can’t be worth the written price tag. Big price cuts bring big crowds, and I can’t help but flash back to the image of hapless gawkers being trampled half to death as soon as store doors crack open an inch.

No, I’d be much happier safely holed up in the kitchen, cranking up the oven and making my own holiday gifts, as per usual. Dark as coal but a much sweeter gift to recieve, it seemed only fitting to make a black dessert for the occasion. Seeking out a slightly fancier presentation, you may have noticed that these bars were in fact cut as rounds. Black Gingerbread Bars. Vegan & Gluten-Free Recipes by Allyson Kramer. Since it is two days before the new year, and most of us are already overwhelmed (and feeling sick) with all the holiday eats & treats that we have indulged in over the last few weeks, I am going overboard and uncorking an ice cream recipe. 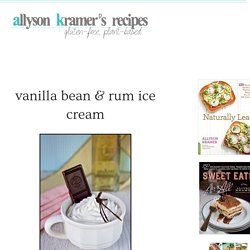 A Match Made Through Science. To the average cook, flavor pairing is a critical art to understand and master, but in truth, it’s much more of a science than anything else. 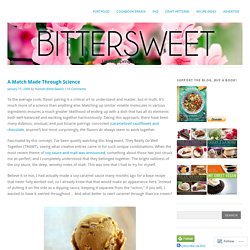 Matching up similar volatile molecules in various ingredients ensures a much greater likelihood of ending up with a dish that has all its elements both well-balanced and working together harmoniously. Taking this approach, there have been many dubious, unusual, and just bizarre pairings concocted (caramelized cauliflower and chocolate, anyone?) But most surprisingly, the flavors do always seem to work together. End All, Be All. “Just a few more tweaks” should be my mantra; Rarely able to stick to a recipe as written, either from a trusted resource or even my own pen, it’s near impossible for me to cook the same dish twice without throwing in something new. 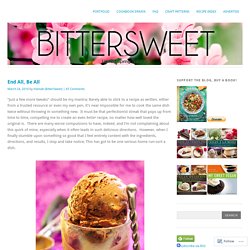 It must be that perfectionist streak that pops up from time to time, compelling me to create an even better recipe, no matter how well loved the original is. There are many worse compulsions to have, indeed, and I’m not complaining about this quirk of mine, especially when it often leads in such delicious directions. End All, Be All. Banana Toffee Pie with a Shortbread Crust. Banoffee pie, as in "banana toffee pie," strikes an amusing balance between buttery rich sweetness and everyday fruit flavors. 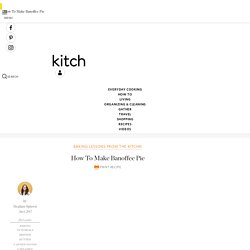 This playfulness is exactly what makes it extraordinary. This no-bake pie cuts into a buttery cookie crust full of a creamy brown sugar-flavored toffee filling. Just try saying that three times fast! Topping the sumptuous toffee filling with seemingly ordinary bananas and barely sweetened whipped cream brings balance back to every bite.

Be assured this is still one seriously sweet dessert, but one that leaves a wake of ardent admirers in its wake. Step-by-Step Instructions for One-Ingredient Ice Cream. 3-Ingredient Healthy Ice Cream. Come January, the hum and buzz of juicers everywhere builds and I hear of more and more people making resolutions to clean out their systems and drink more juice, at least temporarily. 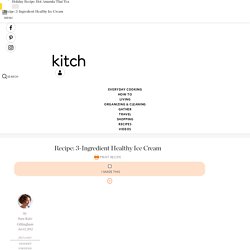 No judgement; in fact, last year at this time I was on a five-day juice cleanse so my juicer was working hard and I was feeling alive and clean. This year, though, I am more in the mood to make my ice cream machine hum rather than my juicer. So when a friend who is on a cleanse joked that we put the two together, I leapt at the challenge. This was one hell of a dare; aside from having no dairy or eggs, this ice cream needed to be sugar free.

With that last nail in the coffin, I stepped way out of my comfort zone and into the test kitchen. Vegan Strawberry Swirl Ice Cream. We had a legitimate heat wave in Seattle last week — which, as you can probably guess, isn't all that common. 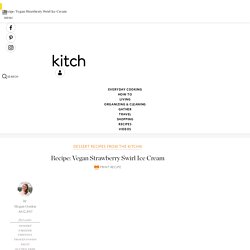 I didn't feel much like cooking, and instead found myself reaching for simple salads, popsicles, and sparkling water — with a few scoops of ice cream thrown in for good measure. That's how the idea for this recipe was born. We had sweet strawberries from the farmers market, and instead of going out for ice cream cones, we made our own and lingered in the backyard. Vegan Coconut Almond Chocolate Chip Ice Cream. I fondly remember the days when Ben & Jerry's made Coconut Almond Fudge ice cream by the pint — my parents would buy it and hide it towards the back of the freezer so we wouldn't know it was there, but I'd always manage to tuck into it quietly and slowly so they wouldn't notice.

When Ben & Jerry's discontinued it, I eventually discovered a natural foods brand made with coconut milk, but it just wasn't quite as velvety and delicious. So imagine my delight when I was at our local scoop shop here in Seattle the other day and stumbled across a Vegan Coconut Almond Chip ice cream that was spot-on. Vegan Coconut Almond Chocolate Chip Ice Cream. Sticky Toffee Pudding Sundaes. If you'd told me ten years ago that sticky toffee pudding was made with dates of all things, I would have told you I didn't like sticky toffee pudding, take it away. It took a few more years to figure out that toffee pudding doesn't actually taste like dates and even if it did, that dates are, in fact, quite amazing. Thank goodness my eyes (and stomach) saw the light: now the over-the-top English dessert remains at the top of my hedonistic hall of fame.

Sticky toffee pudding, while considered a classic, is actually a more modern addition to the British culinary repertoire. Its exact date of origin is murky, but it became an English menu mainstay in the 1960's, and shortly after that it went global. Sticky toffee pudding is not a pudding in the American sense, but a rich sponge cake smothered in a blanket of caramel sauce. The last restaurant I worked for served the most extraordinary version of toffee pudding. Fall Recipe: Quince & Vanilla Sorbet. Quince is the most luscious fall fruit, but not as widely known or easily found as it should be. It holds its secrets tightly inside; quince is very astringent and not pleasant to eat when raw, but when cooked with sugar it turns coral-pink and delicious.

It's also very high in pectin, which means that it is practically perfect for sorbet. Fresh Mint Chip Frozen Yogurt Recipe. This mint frozen yogurt recipe from the soon-to-be-released Sprouted Kitchen cookbook is brilliant. The recipe combines two parts Greek yogurt with one part cream to make a luscious mint-blasted treat. Summer Recipe: Peach Pie Ice Cream. I'm usually a traditionalist when it comes to pie. For example, there is no need to mess with the greatness that is a slice of warm peach pie topped with a scoop of vanilla ice cream. But ice cream is a different matter. They're Just Pretty.

I had a different kind of post planned for today. I’d wanted to talk to you about measuring your own success and how the markers of success can be tricky. Lemon Curd Ice Cream. Easy Bourbon Peach Sorbet Recipes from The Kitchn. Watermelon Popsicles Recipes from The Kitchn. What I love about summer is the fruit. Blackberry Cabernet Granita (No Ice Cream Maker Necessary!) Coconut and Mango Rice Pudding Pops. Rice? Mexican Chocolate and Almond Ice Cream. I grew up drinking a lot of Mexican hot chocolate, made from those granular discs of Ibarra Mexican chocolate that were always stashed somewhere in our pantry. Summer Recipe: Peach Pie Ice Cream. DIY Wedding Recipe: Creamy, Tangy Lemon Ice Cream. How To Make Creamy Ice Cream with Just One Ingredient! — Cooking Lessons from The Kitchn.