Dessert Recipe: Hot Baked Nutella & Cream Cheese Sandwich. I put the word dessert in the title of this recipe to make sure that this crisp, gooey temptation didn't accidentally find its way into your lunch. 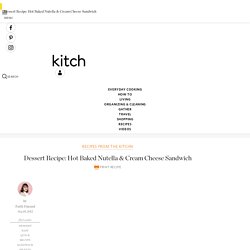 Or dinner. This isn't a meal. It's not a snack. It's really not for breakfast. Chocolate No Knead Bread With Nutella Chips — bacon + egg + cheesecake. I was actually looking forward to the polar vortex thing, no lie. 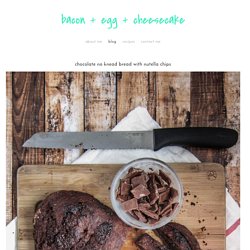 It was ridiculously snowy and everything, which wasn’t too great. But then everyone’s schools started closing and I thought maybe TC would get to stay home today. It would’ve been really perfect timing too, because I knew I wouldn’t have that much work to do today. Strawberry–Nutella Pop Tarts from Kasey of Turntable Kitchen Breakfast with a Blogger. What do our fellow bloggers, writers, and online friends eat, first thing in the morning? 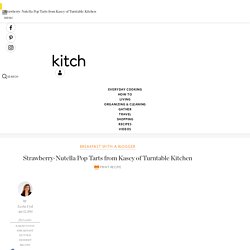 We are asking some friends to share their favorite morning nourishment with us. I will cook and eat it too, and bring you their thoughts on what to eat first thing in the morning. Do the words "homemade pop tart" strike a chord within your soul? Strawberry Nutella Rolls. Happy Friday! 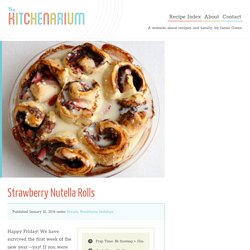 We have survived the first week of the new year –yay! If you were hit with the Arctic/polar vortex this week I hope you are thawing out. Do you love chocolate covered strawberries because these decadent rolls were inspired by them. And I promise if you love chocolate, Nutella specifically, + strawberries you will love these rolls. Brown Butter Apple Loaf. Somewhere deep in my imagination, visions of a dreamy spiced apple cake have long swirled in my head. 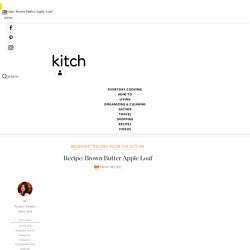 This yet-to-be loaf would be perfectly at home on a crisp Sunday morning, enjoyed with a hot cup of tea and a good book in hand. And yet it would be made for giving, the ultimate thank you for a kind gesture shown by a dear friend. It would be a recipe worth saving, and a recipe worth sharing. Spicy Sticky Cinnamon Rolls with Cream Cheese Icing. I come from a generously-sized family, the sort that prompted wide eyes and under-the-breath counting from strangers who glimpsed our brood at the library or grocery store. 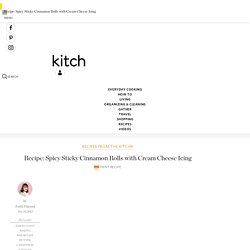 I'll spare you the counting and say that I have five brothers and two sisters, so eight of us, plus parents, and now assorted spouses and in-laws. Christmas is an all-day affair for us, with stockings and enough presents to necessitate an intermission about halfway through unwrapping. But as we've grown up and gotten married, things have shifted; last year we did Christmas in the evening, instead of in the morning, and every holiday now has a marked absence of a sibling (or two) celebrating with someone else's family.

Nutty Streusel Coffee Crumb Cake. This is a darn fine coffee cake, with a sweet vanilla cake, generous streusel and nuts throughout, and a cinnamon-vanilla aroma that will make your house smell better than a bakery. 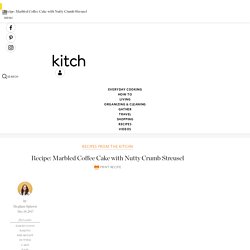 Oh, and the cake part still only requires one bowl, thanks to our one-bowl vanilla cake. That first cup of coffee is starting to look even better. Okay, yes, there is a cake to contend with here, but it's an easy one-bowl ditty that bakes up beautifully no matter what you bake it in. Before assembling the cake batter, make the streusel so that you can layer it inside the cake too.

Pour half of the cake batter into a 9x13-inch baking pan and layer with half the streusel mixture. Strawberry Cream Cheese Swirly Buns. Ready to be the hero of the brunch potluck that everyone talks about for months to come? 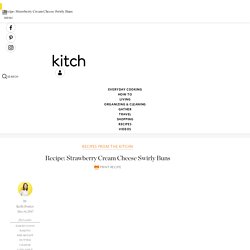 Skip the casserole and go straight for the breakfast treat of the moment: sweet strawberry swirly buns. Think: fruit and cheese danish meets your favorite cinnamon roll, but way better. Not only do they look seriously impressive, but they're also known to elicit squeals of delight with a single bite. In the Kitchen With: Marcela Valladolid’s Churros – Design*Sponge. Fried dough rolled in sugar and cinnamon, what’s not to like? 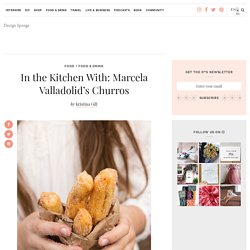 That’s what I think each time I read a recipe for churros. Yet, I have never tried them! Perhaps it’s because I’ve never been in a place where they were available, or perhaps because until I bought a fryer, I was a little scared to fry things — or both. YEASTED PUMPKIN BREAD. In a small saucepan over medium heat, cook 2 Tbsp. of the butter, without stirring, until brown bits form, about 3-4 minutes. 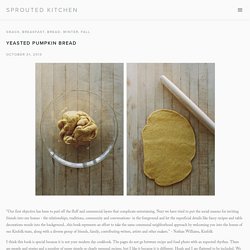 Stir in the milk and get the mixture to 110' (too hot and it'll kill the yeast). Transfer the mixture to a large bowl, stir in the yeast and 1/4 cup sugar. Let it stand for 10 minutes. Stir in the pumpkin puree, salt and 1 cup of the bread/all purpose flour. When combined, add the rest of the flour in several additions, kneading between additions. How To Make Banana Bread. I firmly believe that banana bread is something you should be able to make anytime and anywhere, with a mixer or with a fork, in a loaf pan or in a muffin tin — whenever you have a few bananas going soft and freckly. Banana bread, I'm pretty sure, is at least 50% of the reason bananas exist. Here is a very basic and very forgiving recipe that takes all of 10 minutes to whisk together. An hour of waiting while your house fills with tempting aromas and then you'll be snacking on your very own slice of warm, fresh-baked banana bread.

Only Use the Ripest Bananas. Recipe for Rosh Hashanah: Apple Butter Challah. I have never met a challah I did not like. There is simply something magical about the puffed, egg-enriched loaves that sit at the center of many Jewish holiday meals and that make an extravagant base for French toast. And yet as a kid, I would count down the days to Rosh Hashanah when my mom would bring home challah baked specially for the holiday.

Instead of the typical braided loaves, the challah we ate on Rosh Hashanah (also called the Jewish New Year) came coiled into a chubby spiral to symbolize the year’s cyclical nature. Sesame Banana Bread Recipe. I brought this twist on banana bread on our ill-fated camping trip. I imagined a slice of it would be perfect mid-hike, preferably somewhere near an alpine lake. We have an endless amount of toasted sesame seeds around the house (jars, bags, bins), because Wayne bakes the sesame version of the Tartine country loaf a couple times a week. I was set on the idea of banana bread for the hike, and it occurred to me that a sesame banana bread might be something worth trying, with a tangy lemon icing that cuts.

Seeded Popovers Recipe. The most delightful thing my oven produces is the popover. Gougères are a close second, but the popover wins for sheer drama. They're golden-crusted bready crescendos made from the simplest ingredients. How To Make Bread in the Slow Cooker - Recipe. Are you sitting down? OK, good, because what I'm about to tell you might just blow your mind: You can make a loaf of fresh, warm, homemade bread in your slow cooker. You read that right. You don't have to turn on the oven this summer to get your fresh bread fix — just plug in your Crock-Pot. How To Make Bread in the Slow Cooker When I first heard about baking bread in the slow cooker, I was skeptical. Gingerbread Bundt Cake. How To Make Brioche.