The Proton Radius Prediction and Gravitational Control – The Resonance Project Foundation. On December 20th 2012, Director of Research at The Hawaii Institute for Unified Physics and The Resonance Project Foundation, Nassim Haramein registered a copyright at the Library of Congress (click here to see a copy of the online entry) for his paper Quantum Gravity and the Holographic Mass (QGHM), which was eventually published in the peer-reviewed journal Physical Review & Research International. 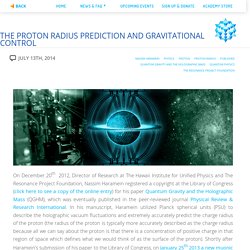 As usual, Daniel Nocera came in by the back door. 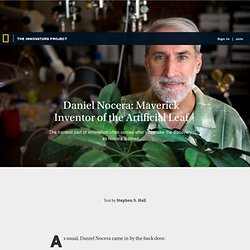 On a rainy night in April, as the trees on the Boston College campus were sending out their first tentative shoots of spring, Nocera arrived (slightly late) as the keynote speaker for a meeting of the American Physical Society, where he was about to discuss a decidedly inorganic variation on a vernal theme: the "artificial leaf," his invention that uses sunlight to generate an alternative form of energy. Nocera made his way across a parking lot, went in the "Employees Only" entrance to the banquet hall, asked a bemused janitor for directions, and found himself in an elevator that deposited him right in the middle of the kitchen.

"I'm the speaker tonight," he told an equally bemused maître d'. "Do you know how to get there? " "You're in the right place," the maître d' announced. "Whaddarewe having tonight? " Wasserbetriebene Autos & Erfinder getötet. QEG – Der Quantum Energy Generator. Motor magnético by Pesquisa Unificada.

Produces More Electricity Than Any Other Source For 3 Months, & Breaks 6 TWh in January. Clean Power Published on February 6th, 2013 | by Zachary Shahan Denmark, the US, and Germany aren’t the only countries breaking wind power records these days. 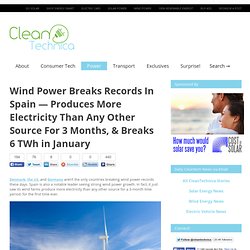 Spain is also a notable leader seeing strong wind power growth. In fact, it just saw its wind farms produce more electricity than any other source for a 3-month time period, for the first time ever. “Since Nov. 1, wind has been the top technology in the electrical system,” the Spanish Wind Energy Association (SWEA) was quoted as writing on its blog. Additionally, data from grid operator Red Electrica de Espana concluded that 6 terawatt-hours (TWh) of electricity had been generated from wind in January, another first for the country. 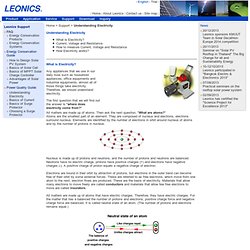 Electric current is the ability to do work. Electric current can be converted to heat, power and magnetism, to name a few. Electric current is classified by its functions and three primary types are: 1. BUY A HUGE FRESNEL LENS GREEN POWER SCIENCE WOULD BE NICE ON THE DISCOVERY NETWORK SOLAR STIRLING ENGINES FRESNEL LENS PARABOLIC MIRROR. eCoupled – intelligent wireless power. Native Clean Energy. Native Clean Energy (NCE) has been investing money, energy and time into researching new energy technologies as it relates to increasing the efficiency of our planet’s current Fossil Fuel based transportation and power production capacities. 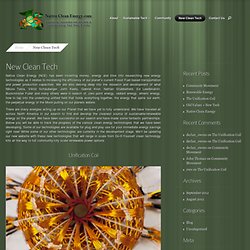 We are also delving deep into the research and development of what Nikola Tesla, Viktor Schauberger, John Keely, Gabriel Kron, Nathan Stubblefield, Ed Leedskalnin, Buckminster Fuller and many others were in search of, zero point energy, radiant energy, etheric energy, how to tap into the underlying unified field that holds everything together, the energy that spins our earth, the perpetual energy of the Moon pulling on our planets waters. There are many energies acting up on our Planet that we have yet to fully understand. We have traveled all across North America in our search to find and develop the cleanest source of sustainable/renewable energy on the planet. 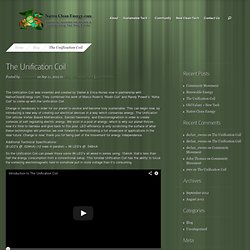 They combined the work of Marco Rodin’s “Rodin Coil” and Randy Powell’s “Abha Coil” to come up with the Unification Coil. Change is necessary in order for our planet to evolve and become truly sustainable. This can begin now, by introducing a new way of creating our electrical devices in a way which conserves energy. The Unification Coil utilizes Vortex Based Mathematics, Sacred Geometry, and Electromagnetism in order to create vortexes of self regulating electric energy. We exist in a pool of energy; which is why our planet thrives, now it’s time to harness and give back to this pool. A Urine Powered Generator : Maker Faire Africa. Posted on Tuesday, November 6, 2012 · 168 Comments Possibly one of the more unexpected products at Maker Faire Africa this year in Lagos is a urine powered generator, created by four girls. 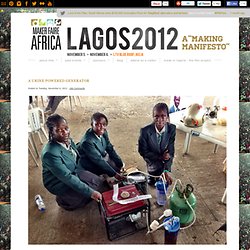 The girls are Duro-Aina Adebola (14), Akindele Abiola (14), Faleke Oluwatoyin (14) and Bello Eniola (15). 1 Liter of urine gives you 6 hours of electricity. The system works like this: Generating AC Power. Energy from Thorium. 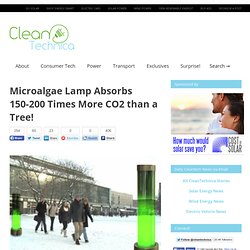 Secondly, it absorbs CO2! Thirdly, 150-200 times more than a tree! OK, I’m calming down, and I realize it has a ways to go to get to actual widespread use in the real, physical, CO2-filled world. French biochemist Pierre Calleja looks pretty serious about it. I don’t know much about the details of all this, but it looks pretty promising to me. h/t Grist Tags: geoengineering, how to absorb co2, lamps absorbing co2, microalgae, microalgae absorbs co2, microalgae lamps, quickies About the Author Zachary Shahan is the director of CleanTechnica, the most popular cleantech-focused website in the world, and Planetsave, a world-leading green and science news site. Science. Free energy. Self Running 40kW 40,000 Watt Fuelless Generator Full Video. Clean Energy. Thermal Depolymerization. Free Energy Magnet Motor (Engine) 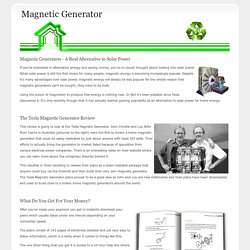 While solar power is still the first choice for many people, magnetic energy is becoming increasingly popular. Despite it's many advantages over solar power, magnetic energy will always be less popular for the simple reason that magnetic generators can't be bought, they have to be built. Using the power of magnetism to produce free energy is nothing new. In fact it's been possible since Tesla discovered it. The Tesla Magnetic Generator Review This review is going to look at the Tesla Magnetic Generator. This resulted in them deciding to release their plans as a down-loadable package that anyone could buy via the Internet and then build their very own magnetic generator. Electric Car Without Battery, make VIRAL ! (Oil replacement solution) Magnetic Motor.