Inequality at a Glance 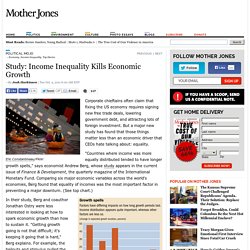 But a major new study has found that those things matter less than an economic driver that CEOs hate talking about: equality. Economics focus: The beautiful and the damned. Wealth doesn't trickle down – it just floods offshore, research reveals. The world's super-rich have taken advantage of lax tax rules to siphon off at least $21 trillion, and possibly as much as $32tn, from their home countries and hide it abroad – a sum larger than the entire American economy. 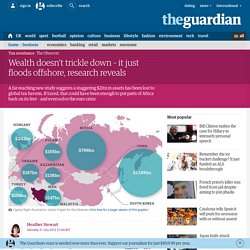 James Henry, a former chief economist at consultancy McKinsey and an expert on tax havens, has conducted groundbreaking new research for the Tax Justice Network campaign group – sifting through data from the Bank for International Settlements (BIS), the International Monetary Fund (IMF) and private sector analysts to construct an alarming picture that shows capital flooding out of countries across the world and disappearing into the cracks in the financial system. Comedian Jimmy Carr became the public face of tax-dodging in the UK earlier this year when it emerged that he had made use of a Cayman Islands-based trust to slash his income tax bill. "These estimates reveal a staggering failure," says John Christensen of the Tax Justice Network. Banks Flooded With Cash They Can’t Profitably Use. Finance & Development, September 2011 - Equality and Efficiency. Finance & Development, September 2011, Vol. 48, No. 3 Andrew G. 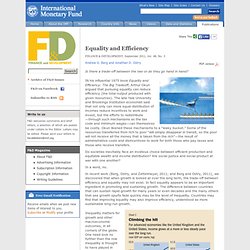 Berg and Jonathan D. Ostry PDF version Is there a trade-off between the two or do they go hand in hand? IN his influential 1975 book Equality and Efficiency: The Big Tradeoff, Arthur Okun argued that pursuing equality can reduce efficiency (the total output produced with given resources). Do societies inevitably face an invidious choice between efficient production and equitable wealth and income distribution? Chance favors the concentration of wealth. Inequality and Unsustainable Growth: Two Sides of the Same Coin? By Andrew G. Berg and Jonathan D. Ostry; IMF Staff Discussion Note SDN/11/08; April 8, 2011. - sdn1108.pdf. Redistribution, Inequality, and Growth. Economics - "Inequality and Instability: A Study of the World Economy Just Before the Great Crisis.

Inequality and Instability. Annual income of richest 100 people enough to end global poverty four times over. Downloads “We can no longer pretend that the creation of wealth for a few will inevitably benefit the many – too often the reverse is true.” 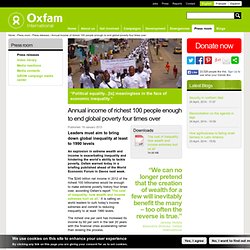 Jeremy Hobbs Executive Director, Oxfam International Published: 19 January 2013 Leaders must aim to bring down global inequality at least to 1990 levels. Report: Wealthy Thrive and Poorest Dive as Surge in US Inequality Continues. The great wealth divide in the United States has only become more exacerbated since the recession, as national policies have buoyed only the wealthiest Americans while the remainder have been left adrift. 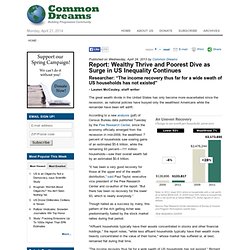 According to a new analysis (pdf) of Census Bureau data published Tuesday by the Pew Research Center, since the economy officially emerged from the recession in mid-2009, the wealthiest 7 percent of households saw soaring gains of an estimated $5.6 trillion, while the remaining 93 percent—111 million households—saw their overall wealth fall by an estimated $0.6 trillion. “It has been a very good recovery for those at the upper end of the wealth distribution,” said Paul Taylor, executive vice president of the Pew Research Center and co-author of the report. “But there has been no recovery for the lower 93, which is nearly everybody.” Rigged rules mean economic growth increasingly “winner takes all” for rich elites all over world. “Without a concerted effort to tackle inequality, the cascade of privilege and of disadvantage will continue down the generations. ” Winnie Byanyima Executive Director, Oxfam International Published: 20 January 2014. 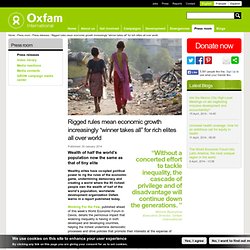 Jared Bernstein: Inequality, the Middle Class, and Growth. The following puts together a bunch of stuff I've been posting over the past few months... it's time to start thinking about these ideas in terms of new economic models to replace the old, worn out ones... 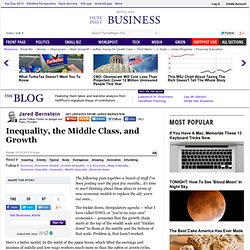 The trickle-down, deregulatory agenda -- what I have called YOYO, or "you're on your own" economics -- presumes that the growth chain starts at the top of the wealth scale and "trickles down" to those at the middle and the bottom of that scale. Problem is, that hasn't worked. Here's a better model. The Fight Over Inequality. The headline promised an article of critical importance: “Obama’s inequality argument just utterly collapsed.” 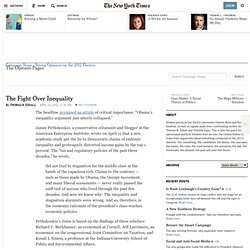 James Pethokoukis, a conservative columnist and blogger at the American Enterprise Institute, wrote on April 11 that a new academic study put the lie to Democratic claims of endemic inequality and grotesquely distorted income gains by the top 1 percent. Income inequality, the issue that won't go away. The Rise and Consequences of Inequality in the United States Alan B. 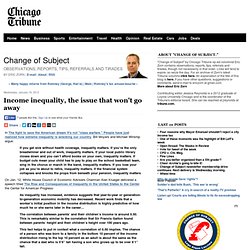 Krueger Chairman, Council of Economic Advisers January 12, 2012 Edited Remarks as Prepared for Delivery. Money and Morals. So you knew what was going to happen next. 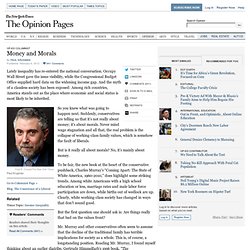 Suddenly, conservatives are telling us that it’s not really about money; it’s about morals. Never mind wage stagnation and all that, the real problem is the collapse of working-class family values, which is somehow the fault of liberals. But is it really all about morals? No, it’s mainly about money. Special Report: The haves, the have-nots and the dreamless dead. EXTREME WEALTH AND INCOME media briefing. Krugman: Worried About Oligarchy? You Ain't Seen Nothing Yet. (Credit: Moyers & Company)In an interview with journalist Bill Moyers set to air Friday, Nobel laureate and New York Times columnist Paul Krugman celebrates both the insights and warnings of French economist Thomas Piketty whose new ground-breaking book, Capital in the Twenty-First Century, argues that modern capitalism has put the world "on the road not just to a highly unequal society, but to a society of an oligarchy—a society of inherited wealth.

" The conclusions that Piketty puts forth in the book, Krugman tells Moyers, are revelatory because they show that even people who are now employing the rhetoric of the "1% versus the 99%" do not fully appreciate the disaster that global wealth inequality is causing. "We are becoming very much the kind of society we imagine we're nothing like.

" Says Krugman: Actually, a lot of what we know about inequality actually comes from him, because he's been an invisible presence behind a lot. "It's a real 'eureka' book," says Krugman. Occupy was right: capitalism has failed the world. The École d'économie de Paris (the Paris School of Economics) is actually situated in the most un-Parisian part of the city. It is on the boulevard Jourdan in the lower end of the 14th arrondissement, bordered on one side by the Parc Montsouris. Unlike most French parks, there is a distinct lack of Gallic order here; in fact, with lakes, open spaces, and its greedy and inquisitive ducks, you could very easily be in a park in any British city. The campus of the Paris School of Economics, however, looks unmistakably and reassuringly like nearly all French university campuses.

Yet his influence runs deep. Piketty's "Capital," in a Lot Less Than 696 Pages - Justin Fox. By Justin Fox | 8:00 AM April 24, 2014 It was only published in English a few weeks ago, but French economist Thomas Piketty’s Capital in the Twenty-First Century has already become inescapable. Wealth Inequality in America. Great Divergence PDF _rollovers converted to standard footnotes_.doc. Josh Bivens on Failure by Design. On fairy tales about inequality. How We Cured “the Culture of Poverty,” Not Poverty Itself.

Protest and Occupy: the promise for 2012 - On Line Opinion - 20/1/2012. How Swedes and Norwegians Broke the Power of the ‘1 Percent’ While many of us are working to ensure that the Occupy movement will have a lasting impact, it’s worthwhile to consider other countries where masses of people succeeded in nonviolently bringing about a high degree of democracy and economic justice. Sweden and Norway, for example, both experienced a major power shift in the 1930s after prolonged nonviolent struggle.

The Great Divergence In Pictures: A visual guide to income inequality. Oaktree Research. Wednesday, 14 December 2005 It is a very common phrase in today’s capitalist society to say that "the rich keep getting richer". There is also a common phrase in Mandarin that says "Money grows money". The Causes of Rising Income Inequality. News, Data & Statistics on Income, Health, Social Inequality. Too Much February 13, 2012. Taxes, the Rich, and Our Known Universe Pundits and political scientists are always searching for that simple theory that'll explain just what makes our politics tick.

Where should they be looking?