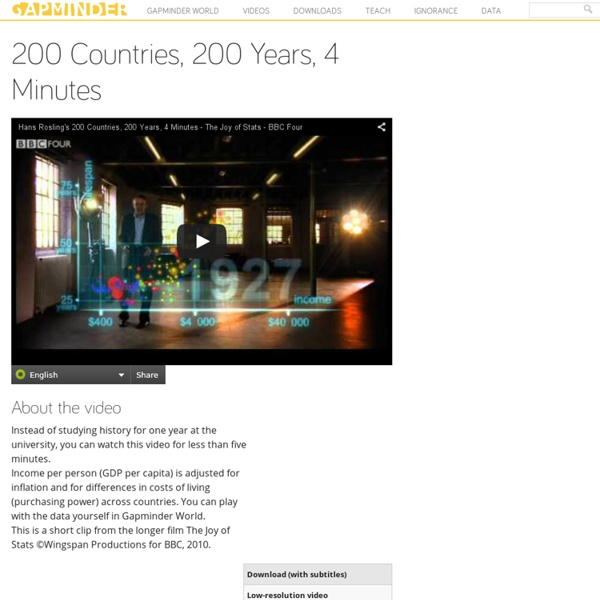 Hans Rosling explains a very common misunderstanding about the world: That saving the poor children leads to overpopulation. Not only is it not right, it’s the other way around! The world might not be as bad as you might believe! “Don’t Panic” is a one-hour long documentary produced by Wingspan Productions and Read more … Hans Rosling is debunking the River of Myths about the developing world. By measuring the progress in the once labeled “developing countries”, preventable child mortality can be history by the year 2030. Instead of studying history one year at the university, you can watch this video for less than five minutes.

Oaktree Research Wednesday, 14 December 2005 It is a very common phrase in today’s capitalist society to say that "the rich keep getting richer". There is also a common phrase in Mandarin that says "Money grows money". What these two phrases imply is that the income of the more wealthy individuals grows at a much faster rate than the less wealthy individuals. Protest and Occupy: the promise for 2012 - On Line Opinion - 20/1/2012 To depict the individual whose activities symbolized the most significant events of 2011, Time magazine featured a protester. That protester was for democracy and against authoritarian rule throughout the Middle East. He or she was also a member of the Occupy Movement, campaigning against corporate greed, the excesses of big banks, governments' collusion in propping up such institutions and rewarding those, mostly invisible, executives who continued to think they were entitled to huge financial spoils, even if a country's economic system crashed, even if unemployment and poverty increased and people lost their homes. Around the world and in particular in the USA, the Occupy Movement continues to protest the clash between corporate power and those – the protesters' placards say 'We are the 99%' - for whom financial chicanery is invisible but who have suffered the consequences of a greedy market based, free for all.

Jared Bernstein: Inequality, the Middle Class, and Growth The following puts together a bunch of stuff I've been posting over the past few months... it's time to start thinking about these ideas in terms of new economic models to replace the old, worn out ones... The trickle-down, deregulatory agenda -- what I have called YOYO, or "you're on your own" economics -- presumes that the growth chain starts at the top of the wealth scale and "trickles down" to those at the middle and the bottom of that scale. Problem is, that hasn't worked. Here's a better model.

How Swedes and Norwegians Broke the Power of the ‘1 Percent’ While many of us are working to ensure that the Occupy movement will have a lasting impact, it’s worthwhile to consider other countries where masses of people succeeded in nonviolently bringing about a high degree of democracy and economic justice. Sweden and Norway, for example, both experienced a major power shift in the 1930s after prolonged nonviolent struggle. They “fired” the top 1 percent of people who set the direction for society and created the basis for something different. A march in Ådalen, Sweden, in 1931. Both countries had a history of horrendous poverty. When the 1 percent was in charge, hundreds of thousands of people emigrated to avoid starvation.

Offline Browsers for Windows - Free downloads and reviews Offline Web browsers download e-mail, Web pages, and other online content to users' local machines for viewing when users are not connected to the Internet. These software programs can often come in handy for portable devices or for dial-up users or users with slow Internet connections. Offline Browsers is a category in the Browsers section. Download a Web site to local directory for offline browsing. Windows Version 3.48-19 ...

Money and Morals So you knew what was going to happen next. Suddenly, conservatives are telling us that it’s not really about money; it’s about morals. Never mind wage stagnation and all that, the real problem is the collapse of working-class family values, which is somehow the fault of liberals. Too Much February 13, 2012 Taxes, the Rich, and Our Known Universe Pundits and political scientists are always searching for that simple theory that'll explain just what makes our politics tick. Where should they be looking? How about in the eyes of a billionaire at tax time? Physicists the world over have been all abuzz lately. A new research breakthrough has them tantalizingly close to a “grand unified theory” of how absolutely everything in the physical universe actually works, the holy grail of modern physics ever since the days of Albert Einstein.

How We Cured “the Culture of Poverty,” Not Poverty Itself A homeless man on the streets of Washington, DC. (Photo: Elvert Barnes / Flickr)It’s been exactly 50 years since Americans, or at least the non-poor among them, “discovered” poverty, thanks to Michael Harrington’s engaging book The Other America. If this discovery now seems a little overstated, like Columbus’s “discovery” of America, it was because the poor, according to Harrington, were so “hidden” and “invisible” that it took a crusading left-wing journalist to ferret them out. On fairy tales about inequality In Jason DeParle’s New York Times article today, it appears that some folks are claiming that the inequality that Occupy Wall Street has called attention to is a thing of the past and of no concern, all because income inequality declined during the recession between 2007 and 2009. Bunk! That decline is the result of the stock market decline and the very same trend occurred in the early 2000s recession only to end with inequality reestablishing and exceeding its previous heights by 2007 (as DeParle quoted Jared Bernstein saying in the article. Go Jared!).

The Fight Over Inequality The headline promised an article of critical importance: “Obama’s inequality argument just utterly collapsed.” James Pethokoukis, a conservative columnist and blogger at the American Enterprise Institute, wrote on April 11 that a new academic study put the lie to Democratic claims of endemic inequality and grotesquely distorted income gains by the top 1 percent. The “tax and regulatory policies of the past three decades,” he wrote, did not lead to stagnation for the middle class at the hands of the rapacious rich. Claims to the contrary — such as those made by Obama, the Occupy movement, and many liberal economists — never really passed the sniff test of anyone who lived through the past few decades. And now we know why: The inequality and stagnation alarmists were wrong.