Alien Code. Neville Goddard It Is Within. How to literally do anything Quantum Manifestation - #1 Marina Jacobi S1E1 ( law of attraction ) (1) Descartes' Meditations on First Philosophy. ARE WE LIVING IN A SIMULATION? Klee Irwin - Scientific Clues That We Are Living In the Matrix. (1) Neville Goddard's Out of This World. (2) Learn This And You Can Predict Future Events In Your Life. Crrow777. 7 Irregularities That Suggest Earth’s Moon Was Engineered.

Even though the Apollo missions brought back to Earth huge amounts of data about the moon, it has re... 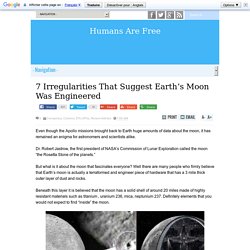 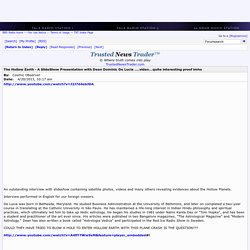 Interview performed in English for our foreign viewers. De Lucia was born in Bethesda, Maryland. He studied Business Administration at the University of Baltimore, and later on completed a two-year course in translating at the Catholic University in São Paulo. He has maintained a life-long interest in Indian Hindu philosophy and spiritual practices, which ultimately led him to take up Vedic astrology. A Hollow Earth. A Hollow Earth? 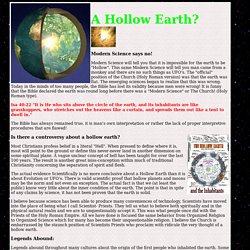 Modern Science says no! Modern Science will tell you that it is impossible for the earth to be "Hollow". This same Modern Science will tell you man came from a monkey and there are no such things as UFO’s. The Holographic Concept of Reality. By Richard Alan Miller, Burt Webb, and Darden Dickson Department of Paraphysics and Parapsychology, Experimental College University of Washington from NWBotanicals Website The organization of any biological system is established by a complex electrodynamic field which is, in part, determined by its atomic physiochemical components and which, in part, determines the behavior and orientation of these components. 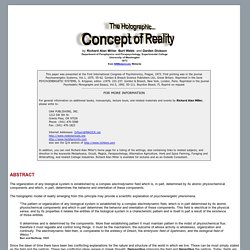 The holographic model of reality emerging from this principle may provide a scientific explanation of psychoenergetic phenomena. Crrow777/The Moon Is NOT What You Think onThe Naked Truth with Kelli In The Raw. Quantum Phase: Time, Parallel Realities and The Brain. 9th June 2015 By Brendan D. 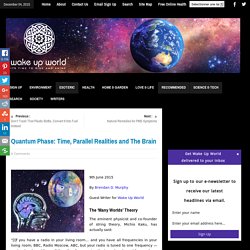 Murphy Guest Writer for Wake Up World The ‘Many Worlds’ Theory The eminent physicist and co-founder of string theory, Michio Kaku, has actually said: “[I]f you have a radio in your living room… and you have all frequencies in your living room; BBC, Radio Moscow, ABC, but your radio is tuned to one frequency — you’re decohered from all the other frequencies. Not long ago, almost anyone who uttered such a sentiment would have been dismissed by many as “New Age-y,” “flaky,” and so on, but it is no longer feasible to use such convenient rationalizations with physicists of Kaku’s credibility speaking as a clairvoyant or mystic might.

Intuitives have long used the terms vibration and frequency to describe what they see and feel, but only now is it becoming quite apparent how prescient their vernacular actually was even before the advent of quantum physics. Such “tuning in” yields what we myopically call ESP. String theorists and cyberneticians rejoice. Simulation Theory 2017 Have we already woken up?? Holographic Beast Anthony Patch. Quantum Physicists: The Universe is a Quantum Algorithm. For more evidence showing that the Universe is made of quantum “computer codes”, read my article titled Theoretical Physicist Finds “Computer Code” in the Fabric of Space. ~ PL Chang By Ovidiu Racorean, author of QuantumFinancialMarkets.WordPress.com. 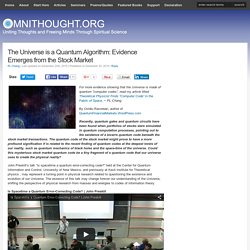 DNA Hologram. Iona Miller and Richard Alan Miller, O.A.K., 2003 iona_m@yahoo.com and drram@magick.net What is DNA; where did it come from; how does it function to create life, to create us? 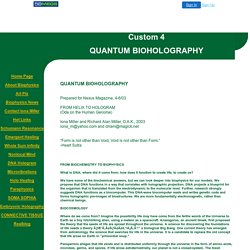 We have some of the biochemical answers, but we can look deeper into biophysics for our models. We propose that DNA functions in a way that correlates with holographic projection. You are a Simulation & Physics Can Prove It: George Smoot at TEDxSalford. NASA Scientist Says We Are Living In A Hologram Designed By Aliens. Who says scientists are boring? 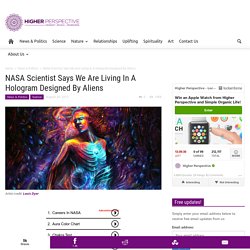 Nick Bostrom, professor of Philosophy at Oxford University and the Director of the Future of Humanity Institute has offered the theory that we may not actually be what we think we are. We may, in fact, be a holographic program generated by banks of supercomputers created by an alien species. As a side note, could you imagine creating a group of sentient beings and then having them figure out on their own that you created them? This is a pretty fringe concept, but not without its backers. Rich Terrile, the director of the Centre for Evolutionary Computation and Automated Design at NASA’s Jet Propulsion Laboratory thinks that our creator may not be a God, but a cosmic computer programmer. Joe Rogan & NASA Physicist: We’re Living in the Matrix.

If you found out that we are all living in the matrix, would you take the blue pill and live a pleasant illusion or take the red pill and live in the harsh real world? 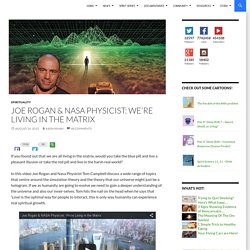 What We Still Don't Know: "Are We Real?" Gerald Clark Emerald Tablets Thoth and the Holographic Universe May 2015. The Illusion Of Matter: Our Physical Reality Isn’t Really Physical At All. Niels Bohr, a Danish Physicist who made significant contributions to understanding atomic structure and quantum theory once said: “if quantum mechanics hasn’t profoundly shocked you, you haven’t understood it yet.” 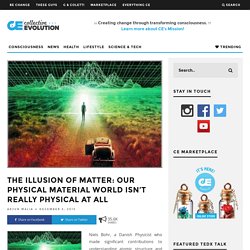 Quantum physics has left scientists all over the world baffled, especially with the discovery that our physical material reality, isn’t really physical at all. “Everything we call real is made of things that cannot be regarded as real.” It seems philosophers of our ancient past were right, our senses really do deceive us. Again, our physical material reality really ISN’T physical at all. Leonard Susskind on The World As Hologram. How the Matrix Works: In the Beginning There Was CODE. The information in this article correlates well with the information in my three articles titled The Artificial Matrix and the Hidden Agenda of Cryptocurrency, How Words Can Be Used as Magic Spells and Theoretical Physicist Finds “Computer Code” in the Fabric of Space. I am aware of the information in the article below and I do agree with most of it. If you are new to this type of information, it may be hard for you to accept and comprehend it. The idea that the moon is an artificial satellite and Saturn used to be a sun has been talked about by many researchers of occult knowledge.

I do not know for sure if it is 100 percent true, because I have no effective way of proving it. However, there is good evidence in the public domain about this subject, so do your own research and come up with your own conclusion. ~ PL. The Binary Code of the Matrix & the Power of the 'Machine' By Arno Pienaar, contributor for DreamcatcherReality.com The Machines’ power in the Binary Code is probably the best kept secret of our time. Let’s expose and dissect the reason why the computer was programmed with the one and the zero. The binary code of ones and zeros that we are familiar with from The Matrix film, holds a deeper meaning than we would have ever thought. The plot of the film is about an unreal, holographic, world wherein there are millions of slaves, performing a role in the society, such as doctors, teachers, lawyers, politicians etc.

They all carry on, fueling the very system that enslaves them, yet they are unaware of the truth because their “minds” are essentially still plugged into what is called the “machine.” DNA Quantum (Hyperspace) Soul Internet. Holographic Disclosure 12. One People Show: Holographic Sky, Digital Sun and the Beat of CERN. The Original Son and the Maya Matrix Perceptual Mind Maze. 10 Lunar Waves Filmed To Date & What We Now Know. Consciousness Mechanics: The Movie.