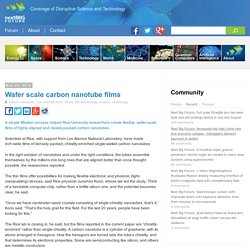 Scientists at Rice, with support from Los Alamos National Laboratory, have made inch-wide films of densely packed, chirality-enriched single-walled carbon nanotubes In the right solution of nanotubes and under the right conditions, the tubes assemble themselves by the millions into long rows that are aligned better than once thought possible, the researchers reported. The thin films offer possibilities for making flexible electronic and photonic (light-manipulating) devices, said Rice physicist Junichiro Kono, whose lab led the study. Think of a bendable computer chip, rather than a brittle silicon one, and the potential becomes clear, he said. “Once we have centimeter-sized crystals consisting of single-chirality nanotubes, that’s it,” Kono said. DARPA demo day highlights exoskeletons, robotic arms and nanotechnology.

Here are some highlights from the DARPA demo day Assembling nano structures from atoms to products DARPA is working on a number of micro-technologies; one example is the effort to build a machine that can assemble nano-structures. 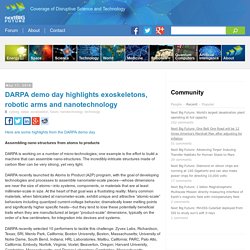 The incredibly-intricate structures made of carbon fiber can be very strong, yet very light. DARPA recently launched its Atoms to Product (A2P) program, with the goal of developing technologies and processes to assemble nanometer-scale pieces—whose dimensions are near the size of atoms—into systems, components, or materials that are at least millimeter-scale in size. Microscopic tools such as this nanoscale “atom writer” can be used to fabricate minuscule light-manipulating structures on surfaces.

Brain controlled Robo-arm Matheney was a highlight of the DEMO Day, drawing a crowd with his ability to move his mechanical elbow, wrist and five fingered-hand. Systems of molecular origami devices and their uses for molecular computing, quorum sensing and programmable drug delivery. A patent by Ido Bachelet and his team for a system acting as logic gates and systems exhibiting quorum sensing. 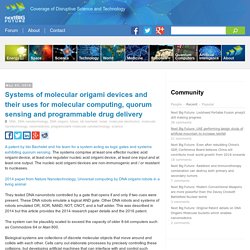 Scientists Have Constructed A Single-Atom Engine. The aim of nanotechnology is to scale down the machinery used in everyday life, in order to control and manipulate the nano-world just as well as we manipulate things our own size. 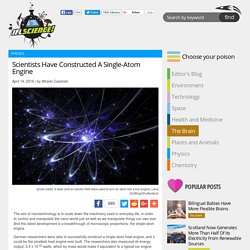 And this latest development is a breakthrough of microscopic proportions: the single-atom engine. German researchers were able to successfully construct a single-atom heat engine, and it could be the smallest heat engine ever built. The researchers also measured its energy output, 3.4 x 10-22 watts, which by mass would make it equivalent to a typical car engine (1.5 kilowatts per kilogram) in terms of power. The results were published in the journal Science. First self-assembled 3D superconductor structure created. Prof. 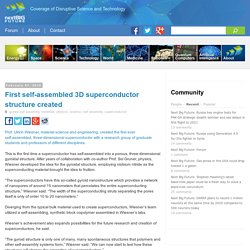 Scientists Develop an Ultrathin Invisibility Cloak. A 3D illustration of a metasurface skin cloak made from an ultrathin layer of nanoantennas (gold blocks) covering an arbitrarily shaped object. 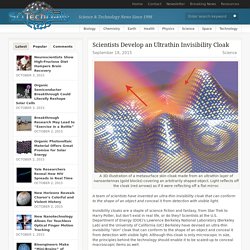