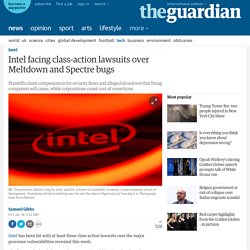 New Material Could Lead to Devices That You Only Need to Charge Once Every Three Months. In Brief A magnetic film developed by researchers from the University of Michigan and Cornell University could potentially make computers and other electronic devices more energy efficient by requiring less charging. 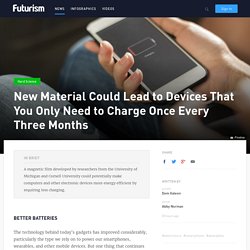 Better Batteries The technology behind today’s gadgets has improved considerably, particularly the type we rely on to power our smartphones, wearables, and other mobile devices. Researchers Just Unveiled a New Li-Fi System That's 100 Times Faster Than Wi-Fi. In Brief This new Li-Fi system uses harmless infrared rays to generate a more secure and stable wireless connection with speeds of up to 42.8 Gbit/s over a distance of 2.5 meters.The system would be a dramatic improvement over traditional Wi-Fi, which typically maxes out at 300 Mbit/s, but it's still about 5 years away from being consumer-ready. 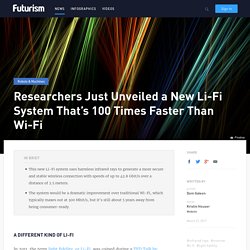 What Surveillance Will Look Like in the Future. When Mark Zuckerberg posted a picture of himself on Facebook in June, a sharp-eyed observer spotted a piece of tape covering his laptop’s camera. 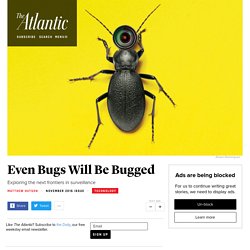 The irony didn’t go unnoticed: A man whose $350 billion company relies on users feeding it intimate details about their lives is worried about his own privacy. BlackBerry’s Rise and Fall in 10 Phones. BlackBerry’s long, slow fade has reached an end point. 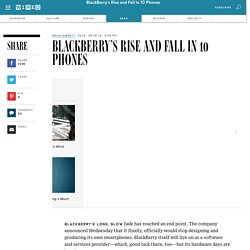 The company announced Wednesday that it finally, officially would stop designing and producing its own smartphones. BlackBerry itself will live on as a software and services provider—which, good luck there, too—but its hardware days are kaput. The reasons for BlackBerry’s hardware decline aren’t mysterious. Rush to Take Advantage of a Dull iPhone Started Samsung's Battery Crisis. Few things motivate Samsung employees like the opportunity to take advantage of weakness at Apple Inc. 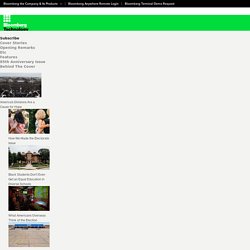 QuickTake Samsung. There's A New Ultra-Thin, Skin-Like Display You Can Wear On Your Wrist. In Brief Technological trend has spurred the demand for wearable and transparent displays. 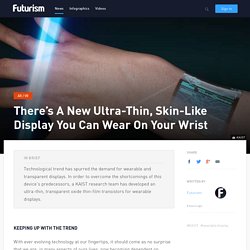 In order to overcome the shortcomings of this device's predecessors, a KAIST research team has developed an ultra-thin, transparent oxide thin-film transistors for wearable displays. Keeping up with the trend With ever evolving technology at our fingertips, it should come as no surprise that we are, in many aspects of ours lives, now becoming dependent on increasingly complex devices. Nowadays, it is crucial to have ultra-portable devices as people instantaneously need to be updated with the latest information available in the vast web. Unbeknownst to all, such devices have already been previously developed. You Need Full-Blown Apps Less Than Ever, And Slack's New Buttons Prove It. Earlier this week, Slack made a big change to how its third-party app integrations work.

Instead of making users type out specific commands, Slack apps can now offer a set of buttons for taking immediate action. Some examples: Users can approve or deny expense reports from Abacus, assign due dates in Trello, or pay a coworker back for lunch with Current—all with one click from a Slack chat. The hope is that workers will spend less time bouncing between applications, and will instead just stay inside Slack to accomplish simple tasks. This concept extends far beyond Slack, however, and is really part of a broader trend in which apps largely exist outside of themselves. The Moto Z: Motorola's Bold Plan to Reinvent the Smartphone by Breaking It Into Pieces.

With iOS 10, Your iPhone’s Basically Just a Lockscreen Now. If you want to drive yourself crazy, have someone tweak a setting or two on your phone. 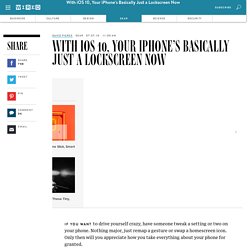 Wireless: the next generation. THE future is already arriving, it is just a question of knowing where to look. 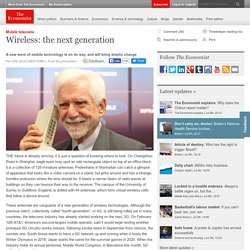 On Changshou Road in Shanghai, eagle eyes may spot an odd rectangular object on top of an office block: it is a collection of 128 miniature antennae. Pedestrians in Manhattan can catch a glimpse of apparatus that looks like a video camera on a stand, but jerks around and has a strange, hornlike protrusion where the lens should be. The Untold Story of Magic Leap, the World’s Most Secretive Startup. Worry about tripping over a tethering cable can seed our unconsciousness with doubt. It might look like it’s there, but it won’t feel there. Following his hunch to exploit human biology, Abovitz set off to make an artificial-reality display in a more symbiont way. The phonelike screens used in the majority of head-mounted displays created a nagging problem: They were placed right next to your eyeballs. If the device is generating the illusion of a blue whale 100 feet away, your eyes should be focused 100 feet away.

But they’re not; they’re focused on the tiny screen an inch away. World's first bendable smartphone set to be launched this year by Chinese startup Moxi. A Chinese startup claims it is going to start selling the world's first bendable smartphone later this year. Moxi Group, a new company based in Chonquing, says it is planning to ship 100,000 of their flexible devices in China by the end of the year, which will cost around 5,000 yuan (£520) each.

The device will look like a long, thin smartphone when unfolded, with a narrow screen and large battery at the bottom. Based on images released by Moxi, it'll be able to bend all the way around, allowing users to fasten it to their wrist like a bracelet. The screen apparently uses graphene, a futuristic material first developed in the UK which is light, thin and very conductive. Flexible smartphones have been developed before, mostly by university researchers or as concepts by big electronics companies. In-Ear Language Translators May Soon Be Here, Thanks to Waverly Labs. In Brief New York City-based company Waverly Labs says they will soon release the Pilot, a pair of in-ear translators designed to let people who speak different languages understand each other in real-time. “It’s real,” says Andrew Ochoa, CEO and founder of the New York City-based company Waverly Labs, which claims to be the first to pioneer an in-ear language translator that is capable of rendering human speech in real-time.

They’re calling it the Pilot, and the “smart earpiece” could soon be in users’ hands. The technology makes use of an embedded app that does the translating, which is delivered to the earpiece that is shared by two people. The Pilot is also supposed to come with an additional earpiece for wireless streaming music and an app that allows people toggles between languages. Android is eating Apple's iOS market share everywhere. As if Apple wasn’t facing enough headwind this year, now comes word that Android smartphones are making big market share gains around the world. According to the latest market share numbers for the first quarter of 2016 (from Kantar Worldpanel ComTech) Android grew significantly in the U.S., Europe, and China as Apple’s iOS lost ground. In the top five European markets (U.K., France, Germany, Italy, and Spain), Android’s market share increased to 75.6 percent, up 7.1 percent compared to the same period a year ago. Android grabbed 65.5 percent in the U.S, up 7.3 percent from the previous year.

And in major Chinese urban areas, Android phones had 77 percent market share, up 6 percent from a year ago. The numbers reflect the growing competition Apple is facing from the proliferation of smartphone brands that offer low-cost Android-based gadgets with a strong set of features. In the U.S., Samsung’s Galaxy S7 is apparently off to a strong start, giving Android a boost there. AI. This is HoloFlex: A Flexible Holographic Smartphone. In Brief. The coolest wearables at CES 2016 are hidden in Samsung's booth. The BlackBerry Priv is expanding to new regions, but is it enough?

However, despite strong competition, Samsung maintained its position as the industry leader in the country in the third quarter of 2015, according to Counterpoint Research.

This guy designed the 'Minority Report future' Wow, Samsung's New 16 Terabyte SSD Is the World's Largest Hard Drive. FireChat will become a totally free mobile carrier. The Turing Phone Is Built to Be Unhackable and Unbreakable. iPhone 6: Can Apple Survive? The Next Apple Watch Already Sounds a Lot More Useful. The Light Phone Is The Anti-Smartphone. Amazon's Echo Might Be Its Most Important Product In Years. Moto X 2014 Hands-On: Better, Smarter, Bigger. Exclusive - Samsung talks to BlackBerry about $7.5 billion buyout: source. BlackBerry acquisition? Tizen phones? It’s been a crazy week for Samsung. Here’s what it means for enterprise mobility management. - Jack Madden. Google Glass sales halted but firm says kit is not dead.