Pricing. XXL 3 — Holographic Displays. Flux. CoCreate_WorkSmarter. The world is poorly designed. But copying nature helps. Sublimotion by Paco Roncero. EvanCoin – My time is your money. Tangible Media Group. InFORM is a Dynamic Shape Display that can render 3D content physically, so users can interact with digital information in a tangible way. inFORM can also interact with the physical world around it, for example moving objects on the table’s surface. 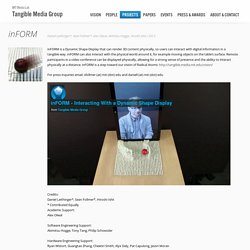 After years of wondering when a consumer robot will be released that can finally relieve me of the drudgery of going to the fridge for a cold adult beverage, Aeolus might have the answer. 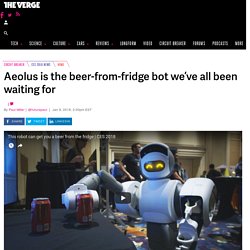 Last night at CES, I witnessed this chunky new wheeled robot from Aeolus Robotics pick up a can of Coke with its grabber arm, swing around, and hand it to me. Of course, beverage delivery isn’t all it’s designed to do. Aeolus is supposed to be a general household helper. It can supposedly recognize “thousands of items,” and wander around your home putting them back where they belong. If you lose your glasses, Aeolus could help you find them. I’ve seen most of these skills demonstrated by research robots — ones that usually cost hundreds of thousands to build and are part of multimillion-dollar research programs. My big question is: how many of these features can Aeolus ship in its eponymous robot by the end of the year? Wireless charging pads are all over CES 2018, thanks to the new iPhones. Wireless charging is not particularly new technology, but this year at CES 2018, we’re seeing it show up in a big way. 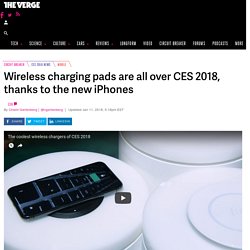 Tons of companies are releasing new products in a wide variety of form factors and styles. Specifically, we’re seeing a huge wave of Qi wireless chargers, the popular industry standard that’s used by major smartphone companies like Samsung, LG, and many others. The standard has actually been around for years, but last fall, Apple introduced Qi charging to its new iPhone 8 and iPhone X models which brought an influx of new users. So now, accessories companies are cashing in. Apple jumping on board meant two things: lots of new customers looking for Qi pads, and the effective end of the other main wireless charging standard, PWA. Unlike a charging cable, which is relatively unobtrusive, a wireless charger is a semi-permanent fixture on your desk, which means that there’s a lot more that goes into making a charging pad. Mini flute sippers for champagne splits - Recherche Google. POPSUGAR and Old Navy Host a Holiday Giveaway Event.

JetBlue Released A Board Game That Includes A Free Round-Trip Flight. The game includes 60 packing cards, a die, a rule book, wildcards and, most notably, a free trip. 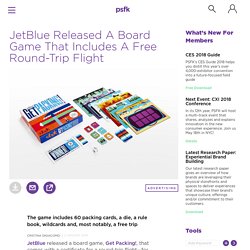 Your Next Hotel Room Could Have A Drink-Mixing Robot. Food Available to Premium & Purple Members The Somabar serves a number of mixed drinks with a push of a button Hotels are meant for luxury, allowing patrons to put their feet up and enjoy some well deserved rest and relaxation. 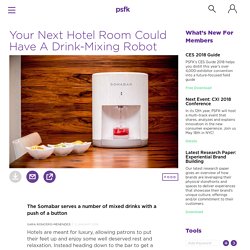 Instead heading down to the bar to get a drink at the end of the day, guests might soon be able to have one made in the comfort of their room. The Somabar is robotic device that can make nearly any cocktail that a guest could desire. Somabar. Airport Pop-Up Combines Both Shopping And Entertainment. Fragrance company Puig unveiled a new stand where travelers can try out new experimental products Fragrance company Puig teamed up with travel retailers Attenza Duty Free to set up a pop-up retail stand in the middle of Panama’s Tocumen International Airport. 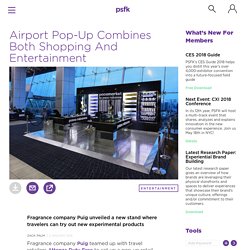 Customers who visit the retail stand have the chance to interact with a number of experimental retail items, such as a piece of furniture resembling a vending machine, pre-filled grocery baskets and a Selfie-Station where customers can share their experiences on social media. Puig coined the concept a ‘retailtainment’ station. Two employees will work at the pop-up store to help guide customers through the experience. The pop-up stand features products from Spanish fashion designer Paco Rabenn.