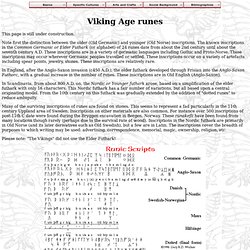 Note first the distinction between the older (Old Germanic) and younger (Old Norse) inscriptions. The known inscriptions in the Common Germanic or Elder Futhark (or alphabet) of 24 runes date from about the 2nd century until about the seventh century A.D. These inscriptions are in a variety of germanic languages including Gothic and Proto-Norse. These inscriptions may occur wherever Germanic peoples travelled or settled. These inscriptions occur on a variety of artefacts including spear points, jewelry, stones. In England, after the Anglo-Saxon invasion (c450 A.D.), the older futhark developed through Frisian into the Anglo-Saxon Futhorc, with a gradual increase in the number of runes. In Scandinavia, from about 800 A.D. on, the Nordic or Younger futhark arose, based on a simplification of the elder futhark with only 16 characters.

Many of the surviving inscriptions of runes are found on stones. What would the proper norse be for "(Name) owns me"? THE ANGLO-SAXON 33-RUNE FUTHARK. The Anglo - Saxon runes had their own unique development from 700 AD to 1200 AD. 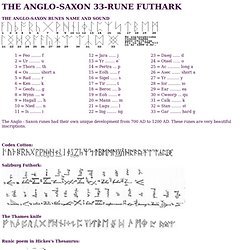 Occult Fetishes. Tarot Teachings: The Art of Learning and Using Tarot. Stages of the Journey. To orient yourself through this description, we suggest you print a copy of the journey map and follow along with the descriptions below. 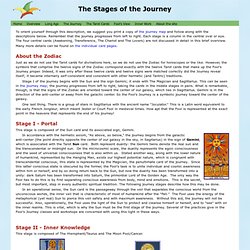 Remember that the journey progresses from left to right. Each stage is a column in the central oval or eye. The four central cards (Awakening, Transference, The Chariot and The Lovers) are not discussed in detail in this brief overview. Many more details can be found on the individual card pages. About the Zodiac Just as we do not use the Tarot cards for divinations here, so we do not use the Zodiac for horoscopes or the like. Stage I of the journey begins with the Sun and the sign Gemini; it ends with The Magician and Sagittarius. One last thing. Stage I - Portal This stage is composed of the Sun card and its associated sign, Gemini. In an operational sense, the Sun card is the passageway through the veil that separates the conscious world from the unconscious worlds, the inner veil that is characteristic of most of humankind after the “Fall.”

Site Map for Tarot Teachings. Category:Throwing the Bones and Reading Other Natural Curios - Association of Independent Readers and Rootworkers. From Association of Independent Readers and Rootworkers Wooden bowl containing shells, bones and nut kernels, South Africa, 1890-1924, from the Science Museum of London Thrown, cast, and marked readings are inspired divinations performed by gifted psychic readers to answer life's questions for their clients. 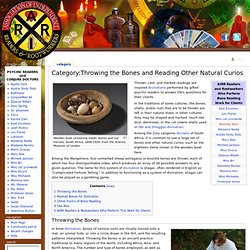 In the traditions of some cultures, the bones, shells, and/or nuts that are to be thrown are left in their natural state; in other cultures they may be shaped and marked, much like dice, dominoes, or the cut cowrie shells used in Obi and Diloggun divination. Among the Zulu sangoma diviners of South Africa, it is common to use a large set of bones and other natural curios, such as the eighteen items shown in the wooden bowl here. Among the Mongolians, four unmarked sheep astragalus or knuckle bones are thrown, each of which has four distinguishable sides, which produces an array of 36 possible answers to any given question. Throwing the Bones Marked Bones for Divination.