Airplanes Are Getting Lighter Thanks to 3-D-Printed Parts. A rapid increase in sales of 3-D printers that make metal parts may just be the beginning of a surge in additive manufacturing in the aerospace industry. 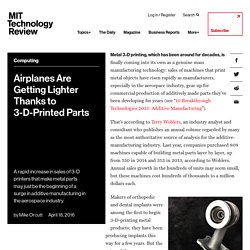 Metal 3-D printing, which has been around for decades, is finally coming into its own as a genuine mass manufacturing technology: sales of machines that print metal objects have risen rapidly as manufacturers, especially in the aerospace industry, gear up for commercial production of additively made parts they’ve been developing for years (see “10 Breakthrough Technologies 2013: Additive Manufacturing”). That’s according to Terry Wohlers, an industry analyst and consultant who publishes an annual volume regarded by many as the most authoritative source of analysis for the additive-manufacturing industry.

Last year, companies purchased 808 machines capable of building metal parts layer by layer, up from 550 in 2014 and 353 in 2013, according to Wohlers. Airplanes Are Getting Lighter Thanks to 3-D-Printed Parts. Flying 3D printer drones perfect for building shelters in disaster areas. Feb 19, 2016 | By Alec If you’re interested in both drone technology and 3D printing, you’ll probably remember the fantastic combination of the two by Dr. 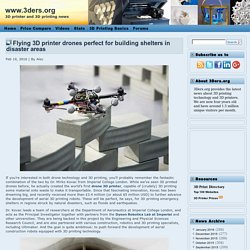 Mirko Kovac from Imperial College London. While we’ve seen 3D printed drones before, he actually created the world’s first drone 3D printer, capable of (crudely) 3D printing some material onto waste to make it transportable. Since that fascinating innovation, Kovac has been dreaming big, and recently received more than £3.4 million (or about $5 million USD) to further advance the development of aerial 3D printing robots. These will be perfect, he says, for 3D printing emergency shelters in regions struck by natural disasters, such as floods and earthquakes. Dr. 3D Opportunity - Collections - Dupress. Advanced manufacturing insights. Additive Technology moves into the fast lane. Posted by Brenna Sniderman You know how it goes at auto shows: concept cars, cool new designs. 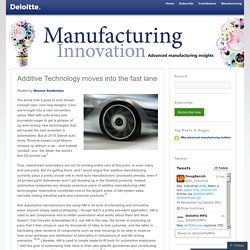 Cars are brought into a vast convention space filled with auto lovers and journalists eager to get a glimpse of up-and-coming new technologies that will herald the next evolution in automobiles. But at 2015 Detroit auto show, Phoenix-based Local Motors showed up without a car…and instead “printed” one: the Strati, the world’s first 3D-printed car.i True, mainstream automakers are not 3d printing entire cars at this point, or even many end-use parts. But it’s getting there, and I would argue that additive manufacturing currently plays a pretty crucial role in most auto manufacturers’ processes already, even if 3d printed parts themselves aren’t yet showing up in the finished products. And automotive manufacturers are using AM in all sorts of interesting and innovative ways, beyond simply rapid prototyping – though that’s a pretty prevalent application. Four-Dimensional Flowers Could Improve Tissue Engineering. If you are tired of the hype around 3-D printing, brace yourself, because it’s time to add another “D.” 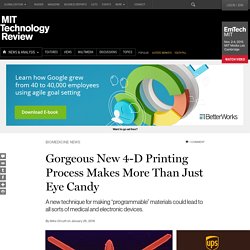 Yesterday, researchers unveiled a new process they can use to “4-D print” flat objects that change into complex shapes when they are immersed in water. The new demonstration builds on the microscale printing process developed under the leadership of Jennifer Lewis, a materials scientist at Harvard. The images are captivating, but they aren’t just pretty pictures; they also hint at a fundamental new capability that could be applied in useful ways. This is not the first time we’ve heard about 4-D printing, which refers to printing things that are “programmed” to change shapes later on. Three years ago Skylar Tibbits, a research scientist in MIT’s architecture department, introduced the term at the TED Conference. Lewis and her colleagues have developed a simpler process based on a single new material, a composite made of a gel-like substance combined with tiny fibers of cellulose.

How 3D Printing Is Changing The World. There’s no question 3D printing is more than a passing fad. 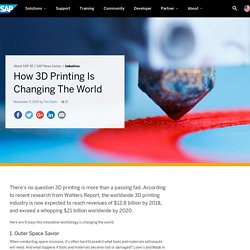 According to recent research from Wohlers Report, the worldwide 3D printing industry is now expected to reach revenues of $12.8 billion by 2018, and exceed a whopping $21 billion worldwide by 2020. Here are 9 ways this innovative technology is changing the world. 1. Outer Space Savior When conducting space missions, it’s often hard to predict what tools and materials astronauts will need. 2. Imagine a patient is rushed to the hospital, in desperate need of a customized medical device. 3.

The 2nd Edition is now filled with 250+ MakerEd & Makerspace Resources Download the ebook here This latest edition is a collection of over 250+ resources to help you with your makerspace and maker education program. 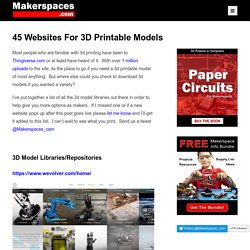 This ebook will be revised quarterly in order to add the latest resources available and to make sure all links are active. The latest revised edition will be sent out automatically to everyone who is currently subscribed. Download the ebook here. 3D Hubs: Local 3D printing services and 3D Printers. Hochschulforum Digitalisierung. So sehen die Patronen von 3D-Druckern vermutlich nicht aus. 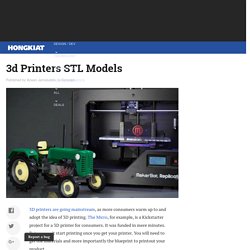 The Micro, for example, is a Kickstarter project for a 3D printer for consumers. It was funded in mere minutes. But you can’t start printing once you get your printer. You will need to get the materials and more importantly the blueprint to printout your product. Pin it If 3D modelling sounds difficult to you, fret not, the Web is filled with sites that offer users free 3D models to print on their printers free of charge.