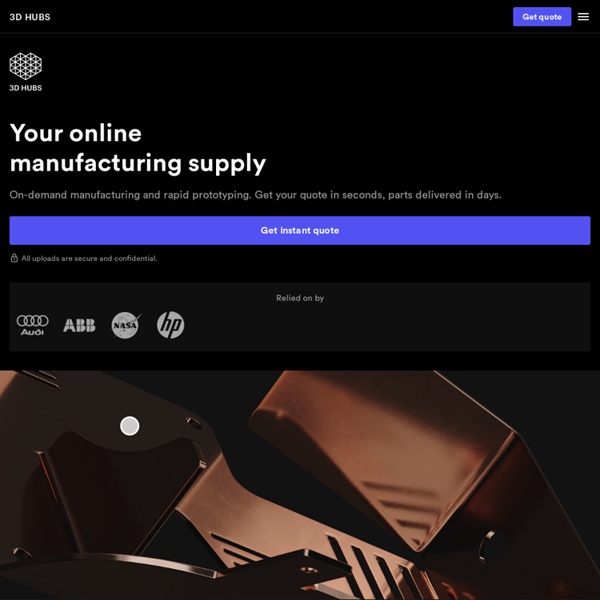 G-code This page tries to describe the flavour of G-codes that the RepRap firmwares use and how they work. The main target is additive fabrication using FFF/FDM processes. Codes for print head movements follow the NIST RS274NGC G-code standard, so RepRap firmwares are quite usable for CNC milling and similar applications, too. There are a few different ways to prepare GCode for a printer. One is to use a slicer like Skeinforge or Cura.

GRBL Grbl is software for controlling the motion of machines that make things. If the maker movement was an industry, Grbl would be the industry standard. Most MakerBots and open source 3D printers have Grbl in their hearts. It has been adapted for use in hundreds of projects including laser cutters, automatic hand writers, hole drillers, graffiti painters and oddball drawing machines. Due to its performance, simplicity and frugal hardware requirements Grbl has grown into a little open source phenomenon. When we ordered our first computer controlled mill in 2007 we were stumped as to how we would control it. Iriodin® for pearl luster color effects Coatings With its outstanding visual and technical properties, Iriodin® is used in a wide range of coating applications, especially in the automotive, architectural, and other industrial sectors. Iriodin® pigments are also offered with an additional coating layer especially for exterior applications. These weather-resistant pigments thus fulfill the highest requirements of reproducibility and lasting color consistency. Printing and plastics Iriodin® pearlescent pigments also open up an extraordinary variety of color effects in the printing industry.

25 Websites To Download Free STL Models For 3D Printers 3D printers are going mainstream, as more consumers warm up to and adopt the idea of 3D printing. The Micro, for example, is a Kickstarter project for a 3D printer for consumers. It was funded in mere minutes. Closed Loop Control For 3D Printers One of the bigger problems with any CNC machine or 3D printer is the issue of missed steps when moving the toolhead. If a stepper motor misses a step, the entire layer of the print – and every layer thereafter – will be off by just a tiny bit. Miss a few more steps, and that print will eventually make its way into the garbage. [Misan] has the solution to this: closed loop control of DC motors for a 3D printer. Most printer firmwares use an open loop control system for moving their motors around. Step a few times in one direction, and you know where the nozzle of a 3D printer will be.

How 3D Printing Is Changing The World There’s no question 3D printing is more than a passing fad. According to recent research from Wohlers Report, the worldwide 3D printing industry is now expected to reach revenues of $12.8 billion by 2018, and exceed a whopping $21 billion worldwide by 2020. Here are 9 ways this innovative technology is changing the world. 1. Outer Space Savior When conducting space missions, it’s often hard to predict what tools and materials astronauts will need. Magnetic Rotary Encoder v1.0 If your RepRap only uses stepper motors, like most of the top-rated RepRaps in the Comparison of Electronics, and you run them at low speed and low acceleration so they don't skip steps, you don't need this or any other encoder. However, if you want to run faster than possible with a stepper motor, read on. As of 2014, this is the most recent magnetic rotary encoder designed for RepRap. As of 2014, this is the best encoder of any kind designed for RepRap -- see RepRapServo 1 0 for an overview of various kinds of encoders.

China Manufacturer Waterproof Folding Travel Fashion Canvas Laptop Bag for Students - China Laptop Bag, Computer Bag 2019 Hot Sale waterproof folding travel fashion canvas laptop bag for students supplier 2019 Hot sale waterproof folding travel fashion canvas laptop bag for students supplierPayment:T/T, L/C, Paypal, Secure Pay, Western UnionWhy choose us?Our factory:1. Your inquiry will be answered within 12hours. Wishing to be your long-term partner,pls feel free contact us,we are always here! 2. Four-Dimensional Flowers Could Improve Tissue Engineering If you are tired of the hype around 3-D printing, brace yourself, because it’s time to add another “D.” Yesterday, researchers unveiled a new process they can use to “4-D print” flat objects that change into complex shapes when they are immersed in water. The new demonstration builds on the microscale printing process developed under the leadership of Jennifer Lewis, a materials scientist at Harvard. The images are captivating, but they aren’t just pretty pictures; they also hint at a fundamental new capability that could be applied in useful ways. This is not the first time we’ve heard about 4-D printing, which refers to printing things that are “programmed” to change shapes later on. Three years ago Skylar Tibbits, a research scientist in MIT’s architecture department, introduced the term at the TED Conference.