Facebook moves into California campus designed by Frank Gehry. Facebook employees have moved into their new Frank Gehry-designed Silicon Valley headquarters – a 40,000-square-metre office building with "the largest open floor plan in the world" and a huge rooftop park. 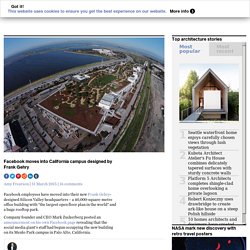 Company founder and CEO Mark Zuckerberg posted an announcement on his own Facebook page revealing that the social media giant's staff had begun occupying the new building on its Menlo Park campus in Palo Alto, California. Known as MPK 20, the building was conceived by Canadian architect Frank Gehry, 86, as the world's largest open-plan office – approximately 2,800 employees will occupy one large room. "Our goal was to create the perfect engineering space for our teams to work together," said Zuckerberg. "To do this, we designed the largest open floor plan in the world — a single room that fits thousands of people," he added. "There are lots of small spaces where people can work together, and it's easy for people to move around and collaborate with anyone here. 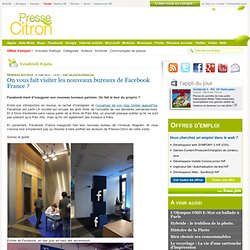 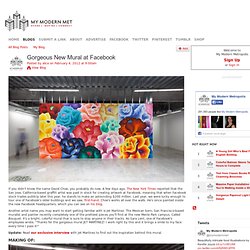 A few days ago, The New York Times reported that the San Jose, California-based graffiti artist was paid in stock for creating artwork at Facebook, meaning that when Facebook stock trades publicly later this year, he stands to make an astounding $200 million. Last year, we were lucky enough to tour one of Facebook's older buildings and we saw, first-hand, Choe's works all over the walls. He's since painted inside the new Facebook headquarters, which you can see on his blog. Another artist name you may want to start getting familiar with is Jet Martinez. The Mexican born, San Francisco-based muralist and painter recently completely one of the prettiest pieces you'll find at the new Menlo Park campus.

Update: Read our exclusive interview with Jet Martinez to find out the inspiration behind this mural. Graffiti Artist Becomes Millionaire After Asking Facebook for Stock Instead of Payment for Work. Facebook Decorates Its Roof With A 42-Foot Wide QR Code. When Mark Zuckerberg called for a “Space Hackathon” to decorate Facebook’s massive new headquarters at 1 Hacker Way, he probably didn’t expect employees to take him so literally. 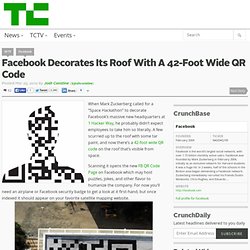 A few scurried up to the roof with some tar paint, and now there’s a 42-foot wide QR code on the roof that’s visible from space. Scanning it opens the new FB QR Code Page on Facebook which may host puzzles, jokes, and other flavor to humanize the company. For now you’ll need an airplane or Facebook security badge to get a look at it first-hand, but once indexed it should appear on your favorite satellite mapping website. When the Hackathon was announced, most employees imagined beautifying the campus with posters and spray paint murals but Mark Pike had something bigger in mind. “It started with a comment on Zuck’s post. At 8pm the night of the Hackathon, Pike and 5 others started on the project. Zuck-1 and More Facebook Office Painting with David Choe. In our continuing series of posts from David Choe’s trip to Facebook this past weekend to paint the new office headquarters in Menlo Park, California, we follow Dave as he paints around Mark Zuckerberg’s desk (and on his desk and laptop for that matter), and in the Facebook lounge. 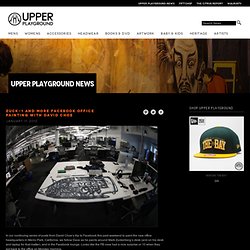 Looks like the FB crew had a nice surprise or 10 when they got back to the office on Monday morning. Check out Facebook’s new 1M-square-foot Menlo Park campus (pics) Connect with leaders from the companies in this story, in real life: Come to the fourth annual VentureBeat Mobile Summit April 14-15 in Sausalito, Calif. 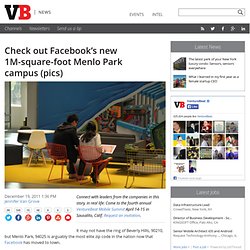 Request an invitation. It may not have the ring of Beverly Hills, 90210, but Menlo Park, 94025 is arguably the most elite zip code in the nation now that Facebook has moved to town. As of Monday, the world’s largest social network is officially headquartered at 1601 Willow Road in Menlo Park. Inside Facebook's New Headquarters. A Look Inside Facebook’s Campus. It has been described as a frat house, a green haven, and one of the coolest places to work. 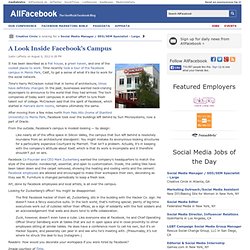 Time recently took a tour of the Facebook campus in Menlo Park, Calif., to get a sense of what it’s like to work for the social network. Time‘s Harry McCracken noted that in terms of architecture, times have definitely changed. In the past, businesses wanted neck-craning skyscrapers to announce to the world that they had arrived. The tech companies of today want campuses in another effort to lure fresh talent out of college. McCracken said that the spirit of Facebook, which started in Harvard dorm rooms, remains ultimately the same. After moving from a few miles north from Palo Alto (home of Stanford University) to Menlo Park, Facebook took over the buildings left behind by Sun Microsystems, now a part of Oracle.