AEPD - E/01090/2021 - GDPRhub. The Spanish DPA (AEPD) has held that sharing documents containing personal data with the courts and other parties involved in the context of legal proceedings does not infringe the right to data protection, as the rights to a due process and legal defence have to be balanced against it. 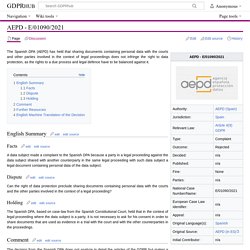 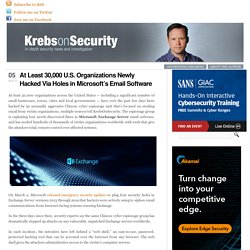 The espionage group is exploiting four newly-discovered flaws in Microsoft Exchange Server email software, and has seeded hundreds of thousands of victim organizations worldwide with tools that give the attackers total, remote control over affected systems. On March 2, Microsoft released emergency security updates to plug four security holes in Exchange Server versions 2013 through 2019 that hackers were actively using to siphon email communications from Internet-facing systems running Exchange. A hacker is selling access to the email accounts of hundreds of C-level executives. A threat actor is currently selling passwords for the email accounts of hundreds of C-level executives at companies across the world. 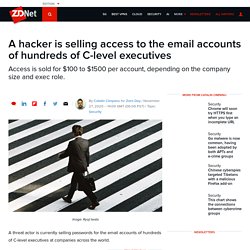 The data is being sold on a closed-access underground forum for Russian-speaking hackers named Exploit.in, ZDNet has learned this week. The threat actor is selling email and password combinations for Office 365 and Microsoft accounts, which he claims are owned by high-level executives occupying functions such as: CEO - chief executive officerCOO - chief operating officerCFO - chief financial officer or chief financial controllerCMO - chief marketing officerCTOs - chief technology officerPresidentVice presidentExecutive AssistantFinance ManagerAccountantDirectorFinance DirectorFinancial ControllerAccounts Payables Access to any of these accounts is sold for prices ranging from $100 to $1,500, depending on the company size and user's role. 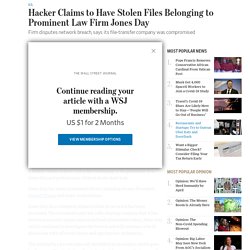 Jones Day has many prominent clients, including former President Donald Trump and major corporations. Jones Day, in a statement, disputed that its network has been breached. The statement said that a file-sharing company that it has used was recently compromised and had information taken. Jones Day said it continues to investigate the breach and will continue to be in discussion with affected clients and appropriate authorities. Data From Hundreds of Law Firms Left 'Exposed' On Open Platform. Les professionnels du droit et la protection des données. Par Tara Taubman-Bassirian, Juriste.

Law Firms data security Liability. GDPR compliance for lawyers. Responsabilité des avocats. Why Should Lawyers Use Encrypted Email? How many lawyers use it? The American Bar Association recommends that attorneys use encrypted email since privacy is at the core of the attorney-client relationship. 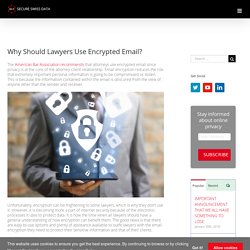 Email encryption reduces the risk that extremely important personal information is going to be compromised or stolen. This is because the information contained within the email is obscured from the view of anyone other than the sender and receiver. Unfortunately, encryption can be frightening to some lawyers, which is why they don’t use it. However, it is becoming more a part of internet security because of the electronic processes it uses to protect data. It is now the time when all lawyers should have a general understanding of how encryption can benefit them.

Law Firms Should Tap Into External Cybersecurity Expertise By Chuck Brooks. Because of the growing threats and emerging technology challenges that increase risk to revenues and reputation, law firms should explore bringing in outside expertise from subject matter experts (SMEs) who understand the latest developments in technologies and compliance/governance directives in the cyber ecosystem. 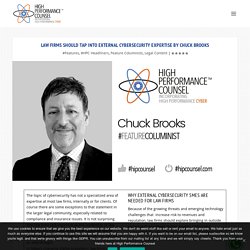 SMEs for the legal community are especially important as the cyber threat includes various criminal enterprises and adversarial nation states. A change in the cyber risk environment has corresponded with heightened investments in threat awareness and information-sharing necessary for successful staying in business. SMEs are a particularly valuable component for evaluating the threat horizon and vulnerabilities. It can be a big benefit to bring in outside SMEs who can “think outside the box” and bring new perspectives. ABA Formal Opinion 477. Cybersecurity alert NY Bar .pdf. Law Firm Internet Security and Data Protection. ENISA Threat Landscape 2020 - Web application attacks. Guide hygiene informatique anssi. Law firm discloses ransomware attack. There have been numerous law firms that have been hacked in the past few years, or worse, attacked with the double whammy of having copies of their files exfiltrated before their systems were encrypted. 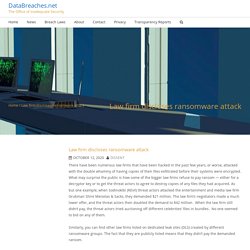 What may surprise the public is how some of the bigger law firms refuse to pay ransom — either for a decryptor key or to get the threat actors to agree to destroy copies of any files they had acquired. As but one example, when Sodinokibi (REvil) threat actors attacked the entertainment and media law firm Grubman Shire Meiselas & Sacks, they demanded $21 million. The law firm’s negotiators made a much lower offer, and the threat actors then doubled the demand to $42 million. When the law firm still didn’t pay, the threat actors tried auctioning off different celebrities’ files in bundles. Ransomware Attacks Hit Three Law Firms in Last 24 Hours. Five U.S. law firms — three in the last 24 hours — have been among the companies and organizations targeted by a new round of ransomware attacks. 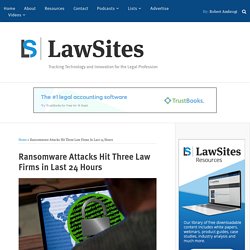 In two of the cases, a portion of the firms’ stolen data has already been posted online, including client information. This according to Brett Callow, a threat analyst with Emsisoft, a cybersecurity company that is also an associate partner in the No More Ransom Project, an initiative between multiple law enforcement agencies and the private sector. Hackers have stolen data from at least five law firms, using the threat of releasing the data to extort payment from the firms, Callow said. In the two cases in which hackers already posted law firm data, they published it on the clear web where it can be viewed by anybody.

The hackers are using the so-called Maze ransomware, which was the subject of a warning issued to companies earlier this month by the FBI. The hackers infiltrate systems using email with malicious attachments, Callow said. Un e-learning pour vous initier au RGPD. YouTube est désactivé. 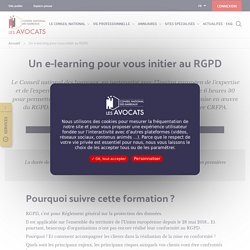 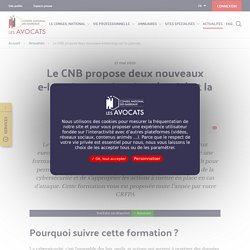 CNB 2020 11 Charte ethique transparence donnees judiciaire a signer. CNB 2020 10 RU vademecum communication[web P K] Les Professionnels du Droit à l&#39;Ère du Numérique. Warning – WeTransfer Scam Emails. Are you a user of the WeTransfer service? Be warned! There are some fake emails getting around that are guaranteed to catch some users out! If you haven’t heard of WeTransfer – its a service that lets you send large files to someone else. Because many email hosts have limits on the size of the files you can send, its a handy service to have when you need to send a 2GB file for example. There is a free version, and there is a paid version.

This email arrived in my inbox no less than 3 times in the space of half an hour this morning, and is no doubt going to catch some customers out. WeTransfer Trojan E-Mail Scam - How to Remove It. Download Malware Removal Tool. Report shows UK law firms unprepared for cyber attacks. According to a report on fraud and cyber crime vulnerabilities in the legal sector, the top 200 law firms in the UK are especially susceptible to cyber attacks.

UK law firm cyber attack statistics 2019 "Conducted" by “Crowe, KYND” and ‘University of Portsmouth’s Centre’ for Counter Fraud Studies, research into the risks impacting the top 200 UK law firms has revealed just how vulnerable the legal sector is to cyber crime. The 2019 report showed that: The amount of money law firms are losing to cyber crime is increasing. According to the SRA, in the first six months of 2019, law firms reported a loss of £731,250 of client money to cyber crime. The Six Biggest Cybersecurity Threats to Law Firms. Meet the Hacker Groups Snatching Law Firms' Client Data. To view this content, please continue to Lexis Advance®. Not a Lexis Advance® Subscriber? Subscribe Now Why am I seeing this?

LexisNexis® is now the exclusive third party online distributor of the broad collection of current and archived versions of ALM's legal news publications. LexisNexis® customers will be able to access and use ALM's content by subscribing to the LexisNexis® services via Lexis Advance®. Hackers hit A-list law firm of Lady Gaga, Drake and Madonna. Law firms under constant cyber-attack.

Hannigan: Law firms can be a weak link in the supply chain Law firms are “performing admirably” in response to daily cybersecurity threats, but are still being successfully compromised, research has found. “Threats against law firms are high volume, multi-faceted, and organised,” it said. “Threat actors use multiple sophisticated tools and techniques.” Panama Papers: The security flaws at the heart of Mossack Fonseca.

RODRIGO ARANGUA/AFP/Getty Images The front-end computer systems of Mossack Fonseca are outdated and riddled with security flaws, analysis has revealed. The law firm at the centre of the Panama Papers hack has shown an "astonishing" disregard for security, according to one expert. How to remove WeTransfer Email Virus - virus removal instructions (updated) What is "WeTransfer"? "WeTransfer" is the title of a deceptive email designed to spread the Kryptik trojan. The email might also be used to spread other malicious programs. You are strongly advised against opening this message, and especially the links it contains, since this will trigger installation of the aforementioned malware infection.

The text presented in the "WeTransfer" email is brief and simply informs recipients that they have been sent a document concerning the unspecified company's profile and purchase/order details ("Our company profile as requested and Purchase Order.pdf"). Gizmodo. Attorney&#39;s Professional Secret &amp; Filter mechanism in balance with fighting Money Laundering: constitutional analysis in favor of Attorney&#39;s Secret. Half of All Organizations Experienced Cyber Security Incidents During the Rem... Half of all organizations experienced security incidents associated with remote working during the lockdown period, according to a report by Tessian. The “Securing the Future of Hybrid Working” report also found that phishing remained the most prevalent threat facing employees working remotely. Cyber criminals make £2.5m raid on law firms in lockdown.