Do We Really Live In Dangerous Times, or Does It Just Feel That Way? By David Ropeik There's a dark & a troubled side of lifeThere's a bright, there's a sunny side, tooTho' we meet with the darkness and strifeThe sunny side we also may view. 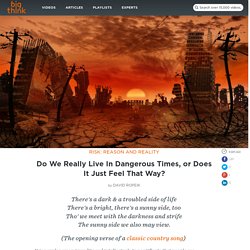 (The opening verse of a classic country song) It is popular among pundits and intellectuals to pontificate that people are irrational to call these the Worst of Times, the scariest, most violent, threatened days humans have ever faced. The thought leaders who raise this criticism cite a host of metrics showing that we are generally better off than we’ve ever been, and that in many ways we live in the Best of Times. So who’s right, the Chicken Littles who worry that the Sky is Falling or the June Carter fans who would have us Keep On The Sunny Side of Life?

The answer is…it doesn’t matter, because that’s the wrong question. The latest entry in the “No, The Sky is NOT Falling” literature is The World Is Not Falling Apart an essay in Slate by Andrew Mack and Steven Pinker. Or as sociologist Jonathan Haidt put it, Why You Should Recycle, Reuse, or Repurpose Old Tech. By Natalie Shoemaker Tablets, phones, and various other gizmos were popular items on everyone's lists this year. 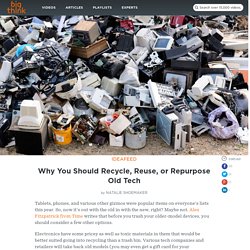 So, now it's out with the old in with the new, right? Maybe not. Alex Fitzpatrick from Time writes that before you trash your older-model devices, you should consider a few other options. Electronics have some pricey as well as toxic materials in them that would be better suited going into recycling than a trash bin. If you want a monetary incentive, then sell your old device on the internet. If you don't want to part with your device quite yet, instead of hoarding it away in the basement, repurpose it. Smartphones can even be repurposed as a hand-me-down for younger kids. Lastly, Fitzpatrick advises donation. Read more at Time Photo Credit: Shutterstock. The Men Who Made Us Thin - Episodul 1 - Film Dailymotion. The Men Who Made Us Fat s01e02. The Century of the Self.

This series is about how those in power have used Freud's theories to try and control the dangerous crowd in an age of mass democracy. 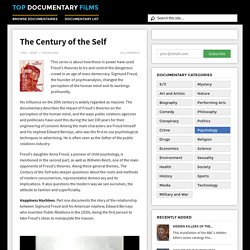 Sigmund Freud, the founder of psychoanalysis, changed the perception of the human mind and its workings profoundly. His influence on the 20th century is widely regarded as massive. The documentary describes the impact of Freud's theories on the perception of the human mind, and the ways public relations agencies and politicians have used this during the last 100 years for their engineering of consent. Among the main characters are Freud himself and his nephew Edward Bernays, who was the first to use psychological techniques in advertising. The Human Animal - Episode 03: The Human Zoo - Watch Free Documentary Online - BBC, John Macnish, Mike Beynon, Desmond Morris (presenter) How Class Works - Richard Wolff Examines Class. The Men Who Made Us Spend - Episode 1. Moshe Safdie: Building uniqueness. Jay Austin's Beautiful, Illegal Tiny House. BBC Two - The Men Who Made Us Spend, Episode 1. THE STORY OF STUFF - Consumerism, Capitalism, & Environment in America [HD] [Full Video]

Ways of seeing: Rob Forbes on TED.com. David Christian: The history of our world in 18 minutes. Blood in the Mobile Official Trailer. The Venus Project - Future By Design - Full documentary. THE REAL GREATEST TALK BY JACQUE FRESCO.

Culture and Environment. Preface In this article I synthesize in a highly condensed form a body of work on culture-environment relations. 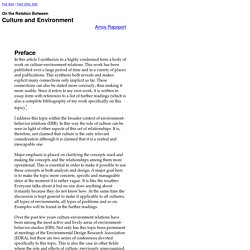 This work has been published over a large period of time and in a variety of places and publications. This synthesis both reveals and makes explicit many connections only implicit so far. These connections can also be stated more concisely, thus making it more usable. Since it refers to my own work, it is written in essay form with references to a list of further readings (which is also a complete bibliography of my work specifically on this topic).1 I address this topic within the broader context of environment-behavior relations (EBR). Major emphasis is placed on clarifying the concepts used and making the concepts and the relationships among them more operational. Over the past few years culture-environment relations have been among the most active and lively areas of environment-behavior studies (EBS). There are, of course, other formulations of EBS. (i). Gmail stuff.