The top secret rules that allow NSA to use US data without a warrant. Top secret documents submitted to the court that oversees surveillance by US intelligence agencies show the judges have signed off on broad orders which allow the NSA to make use of information "inadvertently" collected from domestic US communications without a warrant. 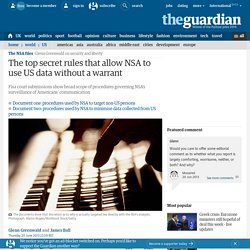 The Guardian is publishing in full two documents submitted to the secret Foreign Intelligence Surveillance Court (known as the Fisa court), signed by Attorney General Eric Holder and stamped 29 July 2009. They detail the procedures the NSA is required to follow to target "non-US persons" under its foreign intelligence powers and what the agency does to minimize data collected on US citizens and residents in the course of that surveillance. The documents show that even under authorities governing the collection of foreign intelligence from foreign targets, US communications can still be collected, retained and used. More NSA leaks: how the NSA bends the truth about spying on Americans while insisting it doesn't spy on Americans. The Guardian has published two more top-secret NSA memos, courtesy of whistleblower Edward Snowden. 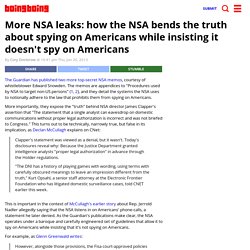 The memos are appendices to "Procedures used by NSA to target non-US persons" (1, 2), and they detail the systems the NSA uses to notionally adhere to the law that prohibits them from spying on Americans. More importantly, they expose the "truth" behind NSA director James Clapper's assertion that "The statement that a single analyst can eavesdrop on domestic communications without proper legal authorization is incorrect and was not briefed to Congress. " This turns out to be technically, narrowly true, but false in its implication, as Declan McCullagh explains on CNet: Clapper's statement was viewed as a denial, but it wasn't. 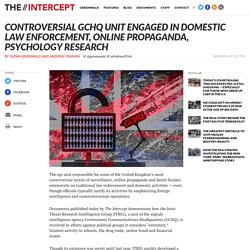 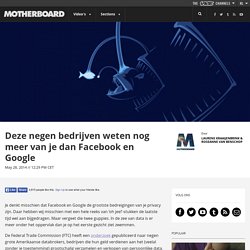 Gleonhard : download this PDF and then... (pdf)Gerd Leonhard: How much will PRISM cost the U.S> Cloud Computing Industry? The NSA is Commandeering the Internet. It turns out that the NSA's domestic and world-wide surveillance apparatus is even more extensive than we thought. 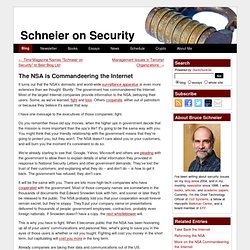 Bluntly: The government has commandeered the Internet. Most of the largest Internet companies provide information to the NSA, betraying their users. Some, as we've learned, fight and lose. Others cooperate, either out of patriotism or because they believe it's easier that way. Silicon Valley and Spy Agency Bound by Strengthening Web. Revealed: how Microsoft handed the NSA access to encrypted messages. Microsoft has collaborated closely with US intelligence services to allow users' communications to be intercepted, including helping the National Security Agency to circumvent the company's own encryption, according to top-secret documents obtained by the Guardian. 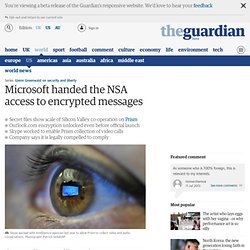 The files provided by Edward Snowden illustrate the scale of co-operation between Silicon Valley and the intelligence agencies over the last three years. A Call to Boycott U.S. Tech Platforms Over the NSA's PRISM Surveillance - Gerd Leonhard. I want to make one thing perfectly clear: this blog post is not an attack on the U.S., and my message is not anti-American. I have lived in the U.S. on and off for almost 12 years. I went to college in Boston (Berklee), my kids are both U.S. citizens as well as German citizens, and we have deep admiration for many American customs, traits, people and places.

But ever since 9/11, the U.S. government seems to have gone down a (until recently) secret path towards some kind of 'digital totalitarianism', with increasing disregard for other countries' mindsets and cultures. The latest developments around PRISM and the NSA dragnet operations uncovered by Edward Snowden, in my view, severely damage the fragile fabric of the new global ecosystem, which we so sorely rely on in order to collectively tackle truly urgent global issues such as energy, pollution, food, climate change, (cyber-)terrorism and inequality. Passing Over Eisenhower - Smari McCarthy. To Predict The Future Of Technology, Figure Out How People Will Use It Illegally casio.

When thinking through the implications of a new technological development, it can be tempting to take the designers’ word on how something will be used in order to play out the results. 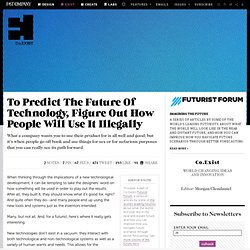 After all, they built it, they should know what it’s good for, right? And quite often they do--and many people end up using the new tools and systems just as the inventors intended. Many, but not all. And, for a futurist, here’s where it really gets interesting. New technologies don’t exist in a vacuum: they interact with both technological and non-technological systems as well as a variety of human wants and needs. As a futurist, I try to think beyond the designers notes when it comes to the impacts of emerging technologies.

These unintended uses can sometimes be the logical consequence of a new technology’s capabilities. In other cases, the unexpected uses show up in combinations with other disruptive technological systems, and unpleasant consequences can result from exploiting that combination. Obama had secret meeting with tech executives to discuss govt surveillance. Google and the NSA: Who’s holding the ‘shit-bag’ now? Image – latimesblogs.latimes.com It has been revealed today, thanks to Edward Snowden, that Google and other US tech companies received millions of dollars from the NSA for their compliance with the PRISM mass surveillance system. 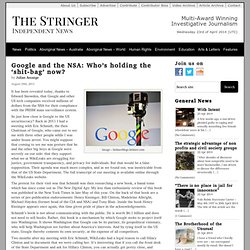 So just how close is Google to the US securitocracy? Back in 2011 I had a meeting with Eric Schmidt, the then Chairman of Google, who came out to see me with three other people while I was under house arrest. You might suppose that coming to see me was gesture that he and the other big boys at Google were secretly on our side: that they support what we at WikiLeaks are struggling for: justice, government transparency, and privacy for individuals. But that would be a false supposition. The pretext for their visit was that Schmidt was then researching a new book, a banal tome which has since come out as The New Digital Age. NSA paid millions to cover Prism compliance costs for tech companies. The Pentagon as Silicon Valley’s Incubator.

Who is holding the shitbag? 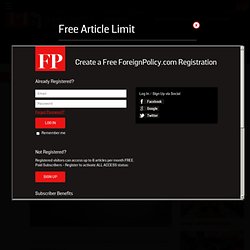 That's how much Edward Snowden just cost defense contractor Boeing. After a lengthy courtship with the Brazilian government, Boeing looked set to sell 36 F-18 fighter jets to the Brazilian Air Force. The value of that contract was said to be about $4 billion, a figure that would only have increased once maintenance costs and other purchases were taken into account. But the deal was potentially much larger than that, the F-18 sale was a way for Boeing to get its foot in the door with a friendly military looking to expand and grow its clout.

Reuters called the deal "one of the developing world's most sought-after defense contracts. " Instead, Boeing lost out to Swedish defense contractor Saab and its Gripen NG fighter jet. But if Boeing is looking for a fall-guy, look no further than Snowden. GCHQ and NSA targeted charities, Germans, Israeli PM and EU chief. British and American intelligence agencies had a comprehensive list of surveillance targets that included the EU's competition commissioner, German government buildings in Berlin and overseas, and the heads of institutions that provide humanitarian and financial help to Africa, top-secret documents reveal. 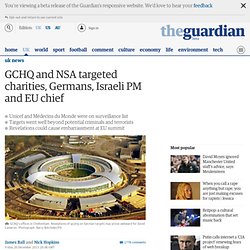 The papers show GCHQ, in collaboration with America's National Security Agency (NSA), was targeting organisations such as the United Nations development programme, the UN's children's charity Unicef and Médecins du Monde, a French organisation that provides doctors and medical volunteers to conflict zones. The head of the Economic Community of West African States (Ecowas) also appears in the documents, along with text messages he sent to colleagues. The latest disclosures will add to Washington's embarrassment after the heavy criticism of the NSA when it emerged that it had been tapping the mobile phone of the German chancellor, Angela Merkel. In 2009, Chambas was president of Ecowas. GCHQ: Briten überwachten Ministerien-Telefonnetz in Berlin. Hamburg - Die Abhöraffäre um den britischen Nachrichtendienst GCHQ ist weitaus größer als bisher bekannt. Der GCHQ hat offenbar EU-Wettbewerbskommissar Joaquín Almunia sowie das Behörden- und Ministerien-Telefonnetz in Berlin und mindestens eine deutsche Botschaft überwacht.

Google’s secret NSA alliance: The terrifying deals between Silicon Valley and the security state. In mid-December 2009, engineers at Google’s headquarters in Mountain View, California, began to suspect that hackers in China had obtained access to private Gmail accounts, including those used by Chinese human rights activists opposed to the government in Beijing. Like a lot of large, well-known Internet companies, Google and its users were frequently targeted by cyber spies and criminals.

But when the engineers looked more closely, they discovered that this was no ordinary hacking campaign. In what Google would later describe as “a highly sophisticated and targeted attack on our corporate infrastructure originating from China,” the thieves were able to get access to the password system that allowed Google’s users to sign in to many Google applications at once.

'leaky' apps like Angry Birds targeted. Attorney / client communications. Silicon Valley's smoke screens and mirrors. Edward Snowden: US government spied on human rights workers. Edward Snowden speaks via video link with members of the Council of Europe, in Strasbourg. Photograph: Vincent Kessler/Reuters The US has spied on the staff of prominent human rights organisations, Edward Snowden has told the Council of Europe in Strasbourg, Europe's top human rights body. Giving evidence via a videolink from Moscow, Snowden said the National Security Agency – for which he worked as a contractor – had deliberately snooped on bodies like Amnesty International and Human Rights Watch.

You can read it here. The NSA Uses Powerful Toolbox in Effort to Spy on Global Networks. In January 2010, numerous homeowners in San Antonio, Texas, stood baffled in front of their closed garage doors. They wanted to drive to work or head off to do their grocery shopping, but their garage door openers had gone dead, leaving them stranded. No matter how many times they pressed the buttons, the doors didn't budge. The problem primarily affected residents in the western part of the city, around Military Drive and the interstate highway known as Loop 410.

In the United States, a country of cars and commuters, the mysterious garage door problem quickly became an issue for local politicians. 12 True Tales of Creepy NSA Cyberstalking. The NSA has released some details of 12 incidents in which analysts used their access to America’s high-tech surveillance infrastructure to spy on girlfriends, boyfriends, and random people they met in social settings. In Mass Surveillance Fallout, European Parliament Votes To Suspend Financial Data Sharing With United States falkvinge. Eben Moglen: Snowden and the Future. CIA's 'Facebook' Program Dramatically Cut Agency's Costs. Eben Moglen - gonggrijp. Prof. Eben Moglen on Snowden & NSA spying. ScienceGuide: NSA is not the enemy, it is Silicon Valley. Academics Against Mass Surveillance. 30c3: Through a PRISM, Darkly - Everything we know about NSA spying. Through a PRISM, Darkly. EFF: "Everything we know about NSA spying" from 30C3. Chris Hedges: Edward Snowden’s Moral Courage.