« In an American sports world where race sometimes seems irrelevant, Douglas is an African-American woman who dominated a lily-white sport. »
Travis Waldron on Aug 3, 2012
[

Tackling a Racial Gap in Breast Cancer Survival. How the Decline of Unions Has Increased Racial Inequality » Scholars Strategy Network. By Meredith Kleykamp and Jake Rosenfeld, Sep 11, 2013, at 01:42 pm By 1980, the wages earned by African-American women and white women came close to being equal, but since then the gap has nearly tripled. 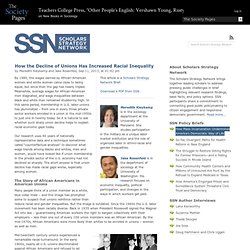 Meanwhile, average wages for African-American men stagnated, and wage inequalities between black and white men remained stubbornly high. In this same period, membership in U.S. labor unions has plummeted – from one in every three private sector workers enrolled in a union in the mid-1950s to just one in twenty today. So it is natural to ask whether such sharp union decline helps to explain racial economic gaps today. Our research uses 40 years of nationally representative data and a technique sometimes called “counterfactual analysis” to discover what wage trends among blacks and whites, men and women, would have looked like if union membership in the private sector of the U.S. economy had not declined so sharply. The Story of African Americans in American Unions. Obamistan Excerpt.pdf. Déclaration du Combahee River Collective. 2 Nous avons choisi de traduire l’expression de Black feminist (par féministes Noires) plutôt que de (...) 3 Cette déclaration date d’avril 1977. 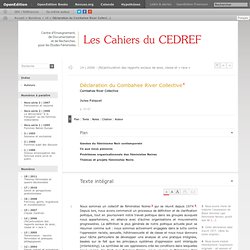 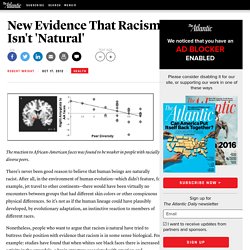 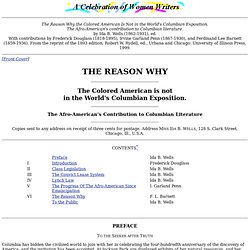 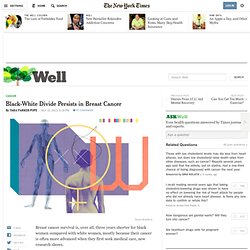 While cancer researchers have known for two decades that black women with breast cancer tend to fare worse than white women, questions remain about the reasons behind the black-white divide. The new report, from researchers at the University of Pennsylvania, begins to untangle some of the issues by using an analytic method to filter the influence of demographics, treatment differences and variations in tumor characteristics, among other things.

How Social Networks Drive Black Unemployment. It’s easy to believe the worst is over in the economic downturn. 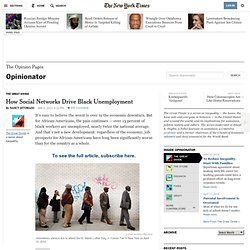 But for African-Americans, the pain continues — over 13 percent of black workers are unemployed, nearly twice the national average. Blacks Professionals’ Progress Stalls. Such numbers raise the question of whether the private sector’s commitment to affirmative action and diversity programs is eroding, even as the Supreme Court again considers a high-profile case involving a public university. 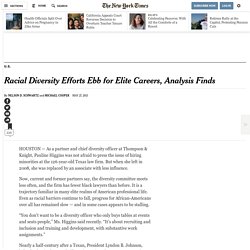 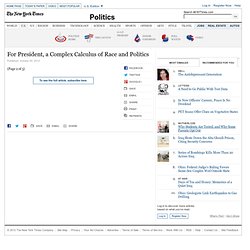 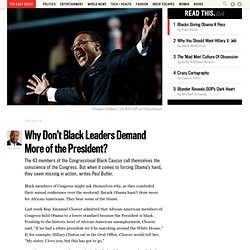 Maps are their own narratives of space. Who draws them, and who names them, holds immense power to determine not just Where You Are, but How Things Are. Subjective or empirical experience in conflict with the map’s own assertions can leave you nowhere, or somewhere unknown, as anyone who has tried to navigate, say, Venice by map will know. Don't Freak Out About the White Babies. The Persistence of the Color Line — By Randall Kennedy — Book Review.

Under Obama, Is America 'Post-Racial'? - Room for Debate. Damon Winter/The New York Times At an Obama presidential campaign rally in Columbus, Ohio, in 2008. 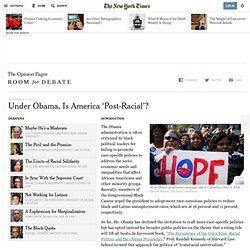 The Obama administration is often criticized by black political leaders for failing to promote race-specific policies to address the socio-economic needs and inequalities that affect African-Americans and other minority groups. Recently, members of the Congressional Black Caucus urged the president to adopt more race-conscious policies to reduce black and Latino unemployment rates, which are at 16 percent and 11 percent, respectively.

Powerful Days. From Grassroots to the Supreme Court. Federal Court Rules On Texas Voter ID. Texas voter ID law is blocked. The panel at the U.S. District Court in Washington ruled that Texas had failed to show that the statute would not harm the voting rights of minorities in the state. In addition, the judges found that evidence indicated that the cost of obtaining a photo ID to vote would fall most heavily on African American and Hispanic voters.