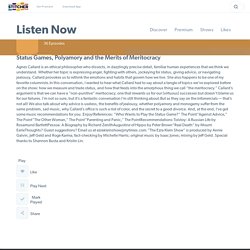 Whether her topic is expressing anger, fighting with others, jockeying for status, giving advice, or navigating jealousy, Callard provokes us to rethink the emotions and habits that govern how we live. She also happens to be one of my favorite columnists.In this conversation, I wanted to hear what Callard had to say about a tangle of topics we’ve explored before on the show: how we measure and trade status, and how that feeds into the amorphous thing we call “the meritocracy.” Against the Rules with Michael Lewis: The Neutral - What type of person makes a trustworthy neutral referee. Short Wave: What We Know (And Don't) About The Dangers Of Vaping. Ted Radio Hour: Risk - Why do we revere risk-takers, even when their actions terrify us? Why are some better at taking risks than others? T. Ted Radio Hour: The Greater Good - how do we decide what personal sacrifices we must make for the benefit of all? This hour, TED speakers share four different ideas about how to act for the greater good.

Ted Radio Hour: Water - We need water to live. But with rising seas and so many lacking clean water — water is in crisis and so are we. Trailblazers: A New Breed of Celebrity - How the opportunity for anyone to cultivate an audience and fan base through social media is changing our relationship to fame. Walter Isaacson: As videos go, it’s not much to look at. 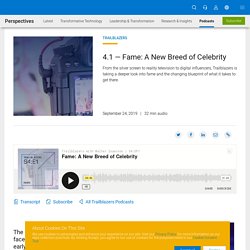 It’s only 18 seconds long and it features a 25 year old man named Jawed Karim standing in front of the elephant enclosure at the San Diego zoo. Speaking directly to the camera, Karim comments on how elephants tend to have long trunks and then wraps it up with, “That’s pretty much all there is to say.” Walter Isaacson: The video is called, appropriately enough, “Me at the Zoo.” Invisibilia: The New Norm - A look at how social norms impact how we behave and the story of how mcdonalds tried to change the social norms of Russia.

The Daily: A Surge in Shootings - What is responsible for the surge in shootings during the summer of 2020? [music] michael barbaro From The New York Times, I’m Michael Barbaro. 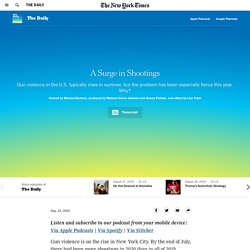 This is “The Daily.” SOC207 - Three Schools of Thought: Conflict Theory, Structural Functionalism, and Symbolic Interactionism. SOC208 - Left Handed Devils: The Social Construction of Deviance. MindShift: How Learning Emotional Skills Can Help Boys Become Men - “What I realized they needed was what I needed in high school. 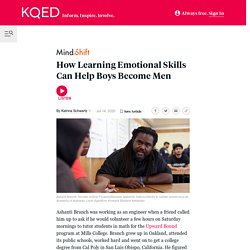 I needed a space to just be human. And to be like, ‘I’m going through stuff, and I don’t get to talk about it, I just have to pretend everything is great. Everything is not. I’m struggling.’” MindShift: The Role of Community in Creating and Healing Trauma in Kids. When kids live in violence-prone neighborhoods, the environment can enable trauma in their lives. 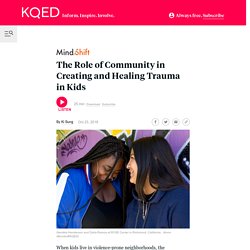 The RYSE Center in Richmond, California, is seeking to change the community’s culture by providing something to young people that’s sometimes missing in their schools and home lives: love and support. The youth center is intentional about listening to the young people it serves, which means providing services far beyond typical after-school activities. In addition to offering classes, computer labs, recording studios, community garden, free food and a place to hang out until it closes at 8pm, RYSE spreads a culture of caring by showing youths what it means to care. "When we ask, 'How are you doing? ' we really want to know," said Kanwarpal Dhaliwal, RYSE’s associate director. Code Switch : Is 'Race Science' Making A Comeback? - A history of "race science" and how its becoming more prevalent in poltical discussions.

Cautionary Tales – The Village of Heroes - A story of one village's response to a 17th century plague and what it tells us about human nature. Not far from where I grew up, there’s a village called Eyam with a story to tell – a story of a plague, and of tragedy, and of heroism. 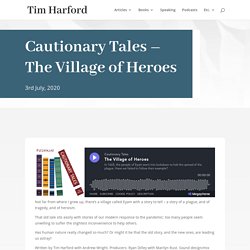 That old tale sits easily with stories of our modern response to the pandemic: too many people seem unwilling to suffer the slightest inconvenience to help others. Has human nature really changed so much? Or might it be that the old story, and the new ones, are leading us astray? Written by Tim Harford with Andrew Wright. Cautionary Tales: The Deadly Airship Race - The story of how competition doomed Brtian's Airship dominance in the early 20th century. A British Lord wanted to build the best airship in the world – and so he had two rival design teams battle it out to win the juicy government contract. 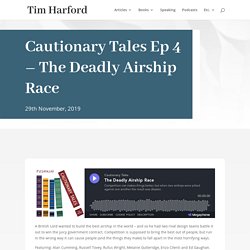 Galileo tried to teach us that when we add more and more layers to a system intended to avert disaster, those layers of complexity may eventually be what causes the catastrophe. 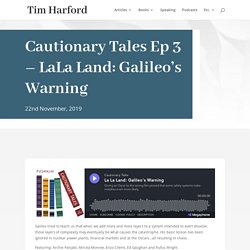 His basic lesson has been ignored in nuclear power plants, financial markets and at the Oscars…all resulting in chaos. Featuring: Archie Panjabi, Mircea Monroe, Enzo Cilenti, Ed Gaughan and Rufus Wright Producers: Ryan Dilley and Marilyn Rust. Sound design/mix/musical composition: Pascal Wyse. Cautionary Tales – A Tsunami of Misery - A look at how humans will take urgent action to avoid acute crises but neglect to take action on longer term problems. Saving people from an urgent threat can cause their lives to be blighted in profound, yet hidden ways. 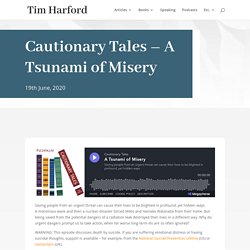 A monstrous wave and then a nuclear disaster forced Mikio and Hamako Watanabe from their home. But being saved from the potential dangers of a radiation leak destroyed their lives in a different way. Why do urgent dangers prompt us to take action, when far worse long-term ills are so often ignored? WARNING: This episode discusses death by suicide. Caught: 'The Teenage Brain Is Like a Sports Car' - How the still developing teen brain leads to erratic and unpredictable chices. KAI: In one instant, everything can change. 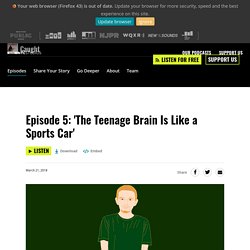 You make a choice and...just like that, you’ve lit a fire, sometimes one you can’t control. These kinds of moments have been turning points in pretty much all the stories we’ve told in this series. Between World: Uncertainty, AI and data: the quest to reimagine the social sciences - Are AI and computers better able than humans to but aside bias and quantify uncertainty? 99 % Invisible: Peace Lines - An overview of "The Troubles" and a look at how walls built dividing neighborhoods all around Belfast changed patterns of violence. In 1998, political leaders in Northern Ireland signed a peace agreement. They hoped it would end the sectarian violence between Catholics and Protestants who’d been fighting each other for decades.

At the root of the conflict was the question of whether Northern Ireland should reunite with the rest of Ireland — or whether it should remain part of the United Kingdom. 99% Invisble: The Help-Yourself City - Stories of informal DIY improvements made in urban infrastructure known as Guerilla Urbanism. “Informal urbanism” is a broad term. It applies to everything created outside the legal city planning and development processes. It can be a whole community, like a favela in Brazil. Or it can be a tiny thing, like a homemade road sign that helps drivers avoid a pothole. But there are lots of actions that skirt the boundary between “formal” and “informal.” ‎Intersectionality Matters!: The Anatomy of An Apology - A look at the potentially misguided notion that love eliminates the need for apology. You're Wrong About:The Satanic Panic - A history of the satanic panic of the 1980s. You're Wrong About: Stockholm Syndrome - The history of a controversial term. Radiolab: The Bad Show - Why do such a high percentage of people admit to having fantasized about murder? And a look at Stanley Milgram's famous obedience to authority experiments.

Robert Krulwich: Hi I'm Robert Krulwich. Radiolab is supported by Casper. Radiolab: War of the Worlds - The story of Orson Welle's famed broadcast and why its been able to repeatedly trick large numbers of people. JAD ABUMRAD: Hey, I’m Jad Abumrad. ROBERT KRULWICH: I’m Robert Krulwich. JAD ABUMRAD: This is Radiolab. ROBERT KRULWICH: And today we’re, um, we’re celebrating a multiple set of anniversaries because it was 80 years ago-80 years ago that Orson Welles and the Mercury Theater decided to allow Martians to invade the state of New Jersey. JAD ABUMRAD: Hmm. ROBERT KRULWICH: It’s one of the most famous broadcasts in broadcast history because it freaked people out. Radiolab: Tit For Tat- An overview of the Prison dilema which explains why individual parties acting in their own best interest may lead to negative outcomes.