Before watching the documentary, I knew Nelson Mandela as the son of Africa because my grandmother told me all that he did for his people and also how he fought for equal rights not just for the black and also for white. I am from African so this story really means a lot to me.

The first thing that caught my eyes in that nelson Mandela said the name nelson was given by his teacher and not his parent.
The second was that nelson got married 3 times, and he had 6 children, he also fell in love at age 80 {That was when I realized that age doesn't determine when you fall in love.
The third was the most admirable event because my grandmother told me this story. In the documentary Mandela was jailed in Robben island at the age of 44, he was given life in imprisonment but he served 27 in prison. he was tortured and he white didn't even see him as human.

The life experience that he loved the most that made him strong is those years he spent in prison, he became stronger and also his political point of view became outstanding, jail time taught him the tactics and also the strategies he needs to become a good president "should I say he was a brave, strong and loved but when Mandela was serving in prison he became stronger and also more respected among his people.


Apartheid can be defined or it's the policy that governed relations between South Africa's white minority and nonwhite majority and sanctioned racial segregation and political and economic discrimination against non-white. it was implemented for the separation of development.
In general, Mandela played a significant role in the movement to implement apartheid. He led the movement to fight against the injustice that was going on in South Africa, This was one of Mandela greatest speech "I have fought against white domination, and I have fought against black domination.i have cherished the ideal of a democratic and free society in which all person live together in harmony and with equal opportunities. it is an ideal which I hope to live for and to achieve. But if needs be it is an ideal for which I am prepared to die.

Nelson Mandela - 30th Anniversary. The life of Nelson Mandela. Discover the remarkable life and work of Nelson Mandela – who helped change the lives of millions of South African people – in our Nelson Mandela facts… Throughout history, lots of people around the world have faced discrimination – where they are treated differently because of their race, skin colour, gender, age and lots of other things, too. Sadly, it still happens to this day! But there are some amazing people who have worked hard to make a change for better, and help us move towards a world where everyone is treated fairly and equally. A Visit to Robben Island, the Brutal Prison that Held Mandela, Is Haunting and Inspiring. The busload of tourists on Robben Island grew quiet as Yasien Mohamed, our 63-year-old guide, gestured to a bleak limestone quarry on the side of the road. 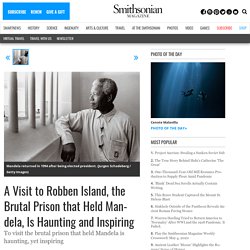 It was here, he said, that Nelson Mandela toiled virtually every day for 13 years, digging up rock, some of which paved the road we were driving on. The sun was so relentless, the quarry so bright and dusty, that Mandela was stricken with “snow blindness” that damaged his eyes. Nevertheless, Mandela and other heroes of South Africa’s anti-apartheid movement, such as Govan Mbeki and Walter Sisulu, used their time in this quarry to teach each other literature, philosophy and political theory, among other things.

“This campus may not look like the fancy university campuses you have in America,” Mohamed said, “but this limestone quarry was one of the great universities of the world.” Many guides are themselves former prisoners, and they speak openly about their lives inside one of the world’s most notorious gulags. Nelson Mandela: a life in pictures. Nelson Mandela. First President of South Africa and anti-apartheid activist Nelson Rolihlahla Mandela (;[1] Xhosa: [xolíɬaɬa mandɛ̂ːla]; 18 July 1918 – 5 December 2013) was a South African anti-apartheid revolutionary, political leader and philanthropist who served as President of South Africa from 1994 to 1999. 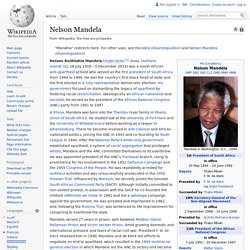 He was the country's first black head of state and the first elected in a fully representative democratic election. His government focused on dismantling the legacy of apartheid by tackling institutionalised racism and fostering racial reconciliation. Ideologically an African nationalist and socialist, he served as the president of the African National Congress (ANC) party from 1991 to 1997.