Statistics. National Eating Disorder Information Centre (NEDIC) Understanding Statistics on Eating Disorders It is important to make sure that you understand the meaning of any eating disorder statistic you may read, and how it can be used. 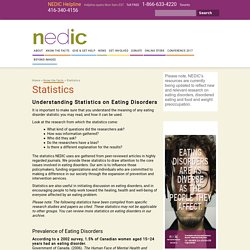 Look at the research from which the statistics come: Statistics on Eating Disorders: Anorexia, Bulimia, Binge Eating. Eating disorders studies, statistics and research are surprisingly difficult to find. 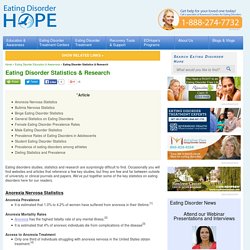 Occasionally you will find websites and articles that reference a few key studies, but they are few and far between outside of university or clinical journals and papers. We’ve put together some of the key statistics on eating disorders here for our readers. Anorexia Nervosa Statistics Anorexia Prevalence. National Association of Anorexia Nervosa and Associated Disorders. General statistics: At least 30 million people of all ages and genders suffer from an eating disorder in the U.S. 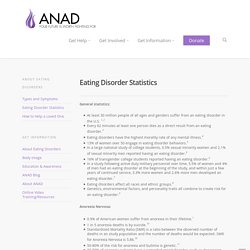 Anorexia Nervosa: Bulimia Nervosa: NIMH » Eating Disorders Among Children. While many people are concerned about what they eat and their body image, eating disorders are marked by extremes. 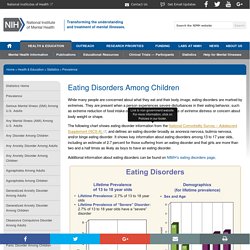 They are present when a person experiences severe disturbances in their eating behavior, such as extreme reduction of food intake or extreme overeating, or feelings of extreme distress or concern about body weight or shape. The following chart shows eating disorder information from the National Comorbidity Survey – Adolescent Supplement (NCS-A) Link to non-government website. For more information, click on Policies in our footer. , and defines an eating disorder broadly as anorexia nervosa, bulimia nervosa, and/or binge eating disorder. NIMH » Eating Disorders. Definition There is a commonly held view that eating disorders are a lifestyle choice. 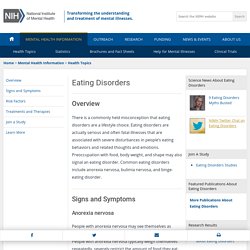 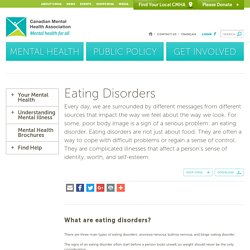 The signs of an eating disorder often start before a person looks unwell, so weight should never be the only consideration. Anorexia nervosa A person who experiences anorexia nervosa may refuse to keep their weight at a normal weight for their body by restricting the amount of food they eat or exercising much more than usual. They may feel overweight regardless of their actual weight. They may think about their body weight often and use it to measure their self-worth. About An Eating Disorder: Symptoms, Signs, Causes & Articles For Treatment Help. What is an Eating Disorder? 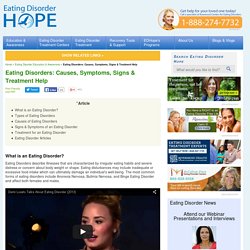 Eating Disorders describe illnesses that are characterized by irregular eating habits and severe distress or concern about body weight or shape. Eating disturbances may include inadequate or excessive food intake which can ultimately damage an individual’s well-being. The most common forms of eating disorders include Anorexia Nervosa, Bulimia Nervosa, and Binge Eating Disorder and affect both females and males.