How to Build Your Own Homemade Aeroponics System. The main problem I have always had with building a homemade aeroponics system is the clogging spray nozzles. 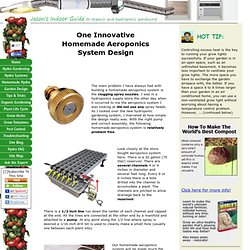 Plants have been to space since 1960, but NASA's plant growth experiments began in earnest during the 1990s. Image at right: These plants have developed healthy root systems without soil in a rapid-growth aeroponic system. In 1997, NASA-sponsored studies aboard the Mir space station studied adzuki bean seeds and seedlings, a high-protein Asian food crop. While all of the seeds did well, those aboard Mir grew more than those on Earth. Inflatable Aeroponic System. Aeroponics. Close-up of lettuce and wheat grown in an aeroponic apparatus, NASA, 1998. 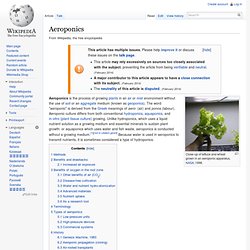 Aeroponics is the process of growing plants in an air or mist environment without the use of soil or an aggregate medium (known as geoponics). The word "aeroponic" is derived from the Greek meanings of aero- (air) and ponos (labour). Aeroponic culture differs from both conventional hydroponics, aquaponics, and in-vitro (plant tissue culture) growing. Unlike hydroponics, which uses a liquid nutrient solution as a growing medium and essential minerals to sustain plant growth; or aquaponics which uses water and fish waste, aeroponics is conducted without a growing medium.[1][not in citation given] Because water is used in aeroponics to transmit nutrients, it is sometimes considered a type of hydroponics. Methods[edit] High-pressure aeroponics is defined as delivering nutrients to the roots via 20–50 micrometre mist heads using a high-pressure (80 pounds per square inch (550 kPa)) diaphragm pump. 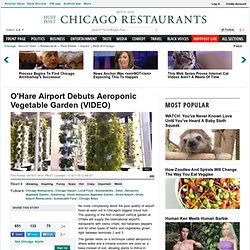 The opening of the first in-airport vertical garden at O'Hare will supply the international airport's restaurants with swiss chard, red habanero peppers and 42 other types of herbs and vegetables grown right between terminals 2 and 3. The garden relies on a technique called aeroponics where water and a mineral solution are used as a base instead of soil, allowing plants to thrive in smaller, more contained environments.

In this case, cylindrical, 8-foot-tall white towers save space and allow for water to be easily circulated. "It uses and recycles water. The water has nutrients in it that feeds the vegetables, so it's using less land growing vertically instead of horizontally," aviation commissioner Rosemarie Andolino told ABC Chicago. The resulting produce will be served in several O'Hare restaurants including Stanley's Blackhawks Lounge and Tuscany. Aeroponics System. DIY Aeroponic System. Hot on the heels of the Aeroponic AeroGarden blog, I'm now going to build a much bigger aeroponic system. 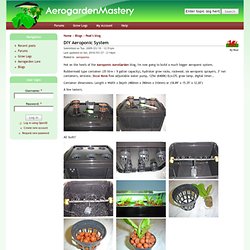