Brexit explained: what happens when the UK leaves the EU? 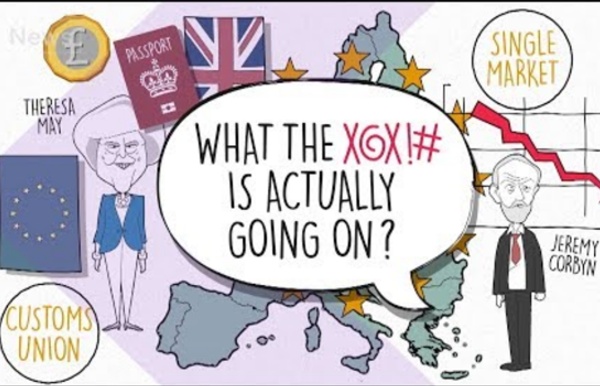 Brexit Information - Local Enterprise Office Brexit – nine areas of potential impact for your business. UK market dynamics – possible market contraction; buy British campaignsCurrency – impact on profits; delayed decision making due to uncertainty - see Currency Risk Management BookletCustomers – impact on customers leading to challenges and opportunitiesCompetition – expect new and increased competitionSourcing – impact on cost, certainty and quality; dependence on UK distributorsTransport and logistics – established transport routes may no longer be optimalRegulations and standards – may change for exporting to and importing from UKCustoms, tariffs and taxation – may see an increase in administration, cost and time, please see Customs Insight Course and The InterTradeIreland Start To Plan Voucher SchemeMovement of people – possible restrictions Your Local Enterprise Office has a range of supports to help you to address issues and maximise potential opportunities, click here to discover Brexit Supports

Getting Business Brexit Ready - DBEI As it stands, the UK is scheduled to leave the European Union as of 11pm on Friday, 29 March 2019. As of 30 March 2019, the UK will be a third country. If the Withdrawal Agreement is ratified before 30 March 2019, most of the legal effects of Brexit will apply as of 1 January 2021, that is, after a 21-month transition period. In the absence of a Withdrawal Agreement (No-Deal), EU law will cease to apply to and in the UK as of 30 March 2019. What has the European Union ever done for us? Britain's turbulent relationship with the European Union is coming to an end, after the UK opted for Brexit in the EU referendum. David Cameron is resigning after failing to convince the public - and his own MPs - that he gained significant ground in his attempts to renegotiate the terms of Britain’s EU membership. But although the UK and EU have had their ups and downs, there are a number of things the Union has done which some may feel could be worth holding on to. 1) It gives you freedom to live, work and retire anywhere in Europe

The Impact of Brexit on UK Businesses Posted by: Dr Aftab Dean It is over a year since the referendum vote signalled the start of Brexit, and in that time UK businesses have experienced mixed fortunes. Those companies that have a global presence have benefited from the fall in the pound, which has resulted in higher revenues being generated when the currency is converted back to sterling. On the other hand, those companies which purchase many of their raw materials overseas have seen significant increases in costs.

The EU in brief The European Union is a unique economic and political union between 28 European countries that together cover much of the continent. The EU was created in the aftermath of the Second World War. The first steps were to foster economic cooperation: the idea being that countries that trade with one another become economically interdependent and so more likely to avoid conflict. The result was the European Economic Community (EEC), created in 1958, and initially increasing economic cooperation between six countries: Belgium, Germany, France, Italy, Luxembourg and the Netherlands. Brexit Is Already Affecting UK Businesses — Here’s How Executive Summary To help better understand the uncertainties created by Brexit, a team from the Bank of England, University of Nottingham, and Stanford University has been running the Decision Maker Panel, a survey of around 7,500 business executives in the UK. The team found that Brexit has been an important source of uncertainty for many UK businesses. They estimate that this led to a 6% reduction in investment in the first two years after the referendum, with employment also around 1.5% lower. And Brexit is likely to reduce future UK productivity by around half a percentage point via a batting average effect of output being reallocated away from higher productivity firms toward lower productivity ones. The majority of businesses anticipate that Brexit will eventually reduce sales and increase costs.

How the EU works: a video guide BBC Europe correspondent Matthew Price has been exploring the corridors of power in Brussels, and here he explains what each EU institution does. Come on a video tour with him. European Commission There are 28 EU commissioners - one from each member state - and each one focuses on a policy area, for example justice and home affairs, or the EU internal market. The Commission's job is to draft EU laws and act as "guardian of the treaties". It enforces EU rules, and if a member state delays enacting an agreed policy, or simply refuses to comply, then the Commission will warn them and if necessary pursue them at the EU Court of Justice.

Impact of Brexit on Businesses in the UK In a historic referendum on June 23rd, 2016, Britain voted to leave the European Union. After which, the pound fell to its lowest since 1985, immediately after the result was declared. The UK is considered one of the best countries to start a business, but that could change due to the unknown effects Brexit could bring. There are Brexit campaigners who have optimistic predictions for Britain and its businesses. But there are still many sceptics who predict that this has been a big mistake for Britain, and that it will be seriously impacted by multiple factors. So, how can Brexit affect businesses in the UK?

European Parliament The European Parliament is the EU's law-making body. It is directly elected by EU voters every 5 years. The last elections were in May 2014. Brexit: Banks are moving $1 trillion out of the UK Banks and other financial companies have shifted at least £800 billion ($1 trillion) worth of assets out of the country and into the European Union because of Brexit, EY said in a report published Monday. Many banks have set up new offices elsewhere in the European Union to safeguard their regional operations after Brexit, which means they also have to move substantial assets there to satisfy EU regulators. Other firms are moving assets to protect clients against market volatility and sudden changes in regulation. The consultancy said the figure represented roughly 10% of the total assets of the UK banking sector, and was a "conservative estimate" because some banks have not yet revealed their contingency plans. "Our numbers only reflect the moves that have been announced publicly," said Omar Ali, head of financial services at EY.