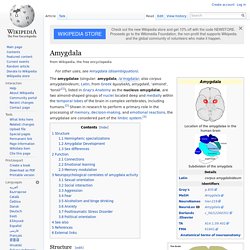 Amygdalae are shown in dark red. Structure[edit] MRI coronal view of the left amygdala Anatomically, the amygdala[7] and more particularly, its central and medial nuclei,[8] have sometimes been classified as a part of the basal ganglia. Hemispheric specializations[edit] There are functional differences between the right and left amygdala. Each side holds a specific function in how we perceive and process emotion. The right hemisphere of the amygdala is associated with negative emotion. The right hemisphere is also linked to declarative memory, which consists of information that can be consciously recalled. Amygdalar Development[edit] There is considerable growth within the first few years of structural development in both male and female amygdalae. In addition to longer periods of development, other neurological and hormonal factors may contribute to sex-specific developmental differences. 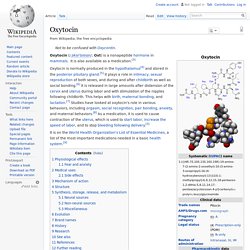 Produced by the hypothalamus and stored and secreted by the posterior pituitary gland, oxytocin acts primarily as a neuromodulator in the brain. Oxytocin plays an important role in the neuroanatomy of intimacy, specifically in sexual reproduction of both sexes, in particular during and after childbirth; its name comes from Greek ὀξύς, oksys "swift" and τόκος, tokos "birth. " It is released in large amounts after distension of the cervix and uterus during labor, facilitating birth, maternal bonding, and, after stimulation of the nipples, lactation. Both childbirth and milk ejection result from positive feedback mechanisms.[3] Recent studies have begun to investigate oxytocin's role in various behaviors, including orgasm, social recognition, pair bonding, anxiety, and maternal behaviors.[4] For this reason, it is sometimes referred to as the "bonding hormone".

Medical uses[edit] Side effects[edit] Dopamine. Dopamine (contracted from 3,4-dihydroxyphenethylamine) is a hormone (also known as Prolactin Inhibiting Hormone/Factor - PIH or PIF) and neurotransmitter of the catecholamine and phenethylamine families that plays a number of important roles in the human brain and body. 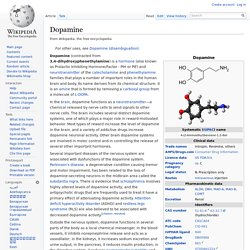 Its name derives from its chemical structure: it is an amine that is formed by removing a carboxyl group from a molecule of L-DOPA. In the brain, dopamine functions as a neurotransmitter—a chemical released by nerve cells to send signals to other nerve cells. The brain includes several distinct dopamine systems, one of which plays a major role in reward-motivated behavior.

Notes: page 4. Www.paulinehardingmd.com/page6.html. By Pauline N. Harding, MD, who is residency trained in Internal Medicine, Board Certified in Family Practice, and licensed as a Nutrition Counselor. She is an instructor in the Department of Family Practice at the University of Illinois College of Medicine in Chicago. She has been on the speakers' forum for the Rush Presbyterian St. Luke's Medical Center Conference for Body-Mind Healing and the Wilson Foundation Conference on Ethics for High School Science Teachers, and she has acted as panel discussant for the American Psychological Association. Dr. Let's take a look at a major contributor to the aging process and what it can tell us about slowing the ravages of time on our health. The Adrenal Gland Cortisol is secreted by the adrenal glands, which are located above the kidneys. Each adrenal gland is composed of two separate functional components.

Stress (biology) Walter Cannon used it in 1926 to refer to external factors that disrupted what he called homeostasis.[2] But "...stress as an explanation of lived experience is absent from both lay and expert life narratives before the 1930s".[3] Physiological stress represents a wide range of physical responses that occur as a direct effect of a stressor causing an upset in the homeostasis of the body. 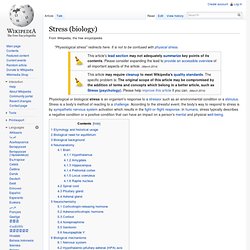 Upon immediate disruption of either psychological or physical equilibrium the body responds by stimulating the nervous, endocrine, and immune systems. The reaction of these systems causes a number of physical changes that have both short and long term effects on the body. Homeostasis is a concept central to the idea of stress. In biology, most biochemical processes strive to maintain equilibrium (homeostasis), a steady state that exists more as an ideal and less as an achievable condition. The ambiguity in defining this phenomenon was first recognized by Hans Selye (1907-1982) in 1926. Stress indicators.