What makes an effective president? - CBS News. A presidential campaign is a job interview. 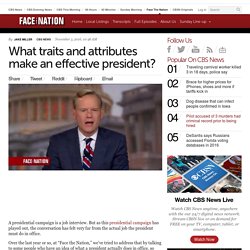 But as this presidential campaign has played out, the conversation has felt very far from the actual job the president must do in office. Over the last year or so, at “Face the Nation,” we’ve tried to address that by talking to some people who have an idea of what a president actually does in office, so that we might evaluate whether the people running have some of the qualities that might pay off when they get the job. The insights and analysis from these interviews vary, but a few key themes stand out: the need for intellectual curiosity, the virtue of maintaining flexibility, both in means and ends, and the ability to convene an experienced, diverse staff that will tell you what you need to hear.

Former Defense Secretary Bob Gates told Dickerson in May, during an interview at William & Mary, that one thing united each of the eight presidents under whom he’s served. Former Pennsylvania Gov. Former CIA Director Gen. Mr. Mr. And finally, Mr. What Makes a Presidential Résumé? - The Atlantic. This article is from the archive of our partner Nineteen former members of the American workforce are running for president—including a pastor, a horseshoer, and a documentary filmmaker. 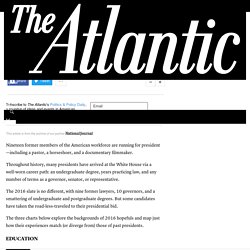 Throughout history, many presidents have arrived at the White House via a well-worn career path: an undergraduate degree, years practicing law, and any number of terms as a governor, senator, or representative. The 2016 slate is no different, with nine former lawyers, 10 governors, and a smattering of undergraduate and postgraduate degrees. But some candidates have taken the road-less-traveled to their presidential bid. The three charts below explore the backgrounds of 2016 hopefuls and map just how their experiences match (or diverge from) those of past presidents. Although every president in the last seven decades had a college degree, it wasn't always that way. All but three of the 2016 candidates have experience in politics. But a few candidates have more colorful CVs. Experience for president. Requirements to Become President of the United States.

What are the constitutional requirements to serve as President of the United States? 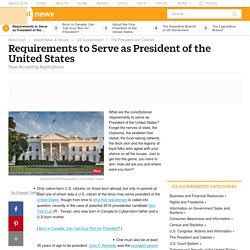 Forget the nerves of steel, the charisma, the skeleton-free closet, the fund-raising network, the thick skin and the legions of loyal folks who agree with your stance on all the issues. Just to get into the game, you have to ask: How old are you and where were you born? Only native-born U.S. citizens (or those born abroad, but only to parents at least one of whom was a U.S. citizen at the time) may serve president of the United States, though from time to time that requirement is called into question, recently in the case of potential 2016 presidential candidate Sen. Ted Cruz (R - Texas), who was born in Canada to Cuban-born father and a U.S-born mother.[ Born in Canada, Can Ted Cruz Run for President? ] One must also be at least 35 years of age to be president. Born in Canada, Can Ted Cruz Run for President? Dateline: July 17, 2014 U.S. 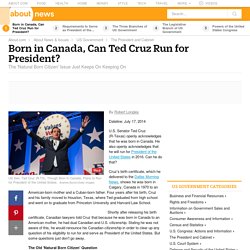 Senator Ted Cruz (R-Texas) openly acknowledges that he was born in Canada. He also openly acknowledges that he will run for President of the United States in 2016. Can he do that? Cruz’s birth certificate, which he delivered to the Dallas Morning News, shows he was born in Calgary, Canada in 1970 to an American-born mother and a Cuban-born father. Shortly after releasing his birth certificate, Canadian lawyers told Cruz that because he was born in Canada to an American mother, he had dual Canadian and U.S. citizenship. The Old ‘Natural Born Citizen’ Question. It’s not just Trump: Voter anger fuels outsider candidates. This has become the summer of the political outsider, as a cast of interlopers upend and dominate the presidential nominating process in both parties. 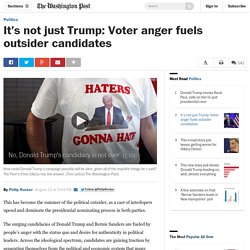 The surging candidacies of Donald Trump and Bernie Sanders are fueled by people’s anger with the status quo and desire for authenticity in political leaders. Across the ideological spectrum, candidates are gaining traction by separating themselves from the political and economic system that many everyday Americans view as rigged against them. “There are a lot of voters who are exceptionally frustrated with traditional politics and politicians and who quite simply feel failed by the system,” said pollster Geoff Garin, who advises Priorities USA Action, a super PAC supporting Democratic front-runner Hillary Rodham Clinton.

“A lot of this anger crosses party lines in the sense that it is directed at what people see as a concentration of wealth and power that leaves them holding the short end of the stick.” Then there is Trump.