Simple Code Turns Any USB Drive Into A Kill Switch For Your Computer. Building A Social Network Of Crime. In Chicago's gang-embattled South Side, a shooting can incite swift retaliation, which spawns even further violence. 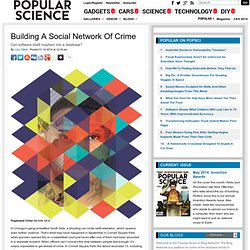 That’s what may have happened in September in Cornell Square Park when gunmen opened fire on a basketball court just hours after one of them had been wounded in a separate incident. When officers can’t connect the dots between people fast enough, it’s nearly impossible to get ahead of crime. In Cornell Square Park, the fallout wounded 13, including a three-year-old boy. Gang violence is generally not random. It’s usually related to territorial disputes or personal rifts—that is, to geographic, cultural, and social connections. Major Paulo Shakarian, an assistant professor at the U.S. They created the Organizational, Relationship, and Contact Analyzer (ORCA), which in seconds generates networks that take people with whiteboards and unstructured databases hours or days to produce.

For the most part, ORCA verified what the Chicago Police Department already knew. Monkey chants as black man died 'not racist' A tape capturing monkey chants made as a black man lay dead on a police station floor was missed by investigators for nearly four years, it emerged yesterday. 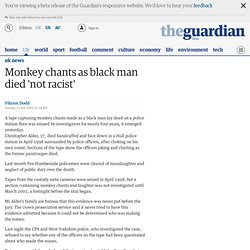 Christopher Alder, 37, died handcuffed and face down in a Hull police station in April 1998 surrounded by police officers, after choking on his own vomit. Sections of the tape show the officers joking and chatting as the former paratrooper died. Last month five Humberside policemen were cleared of manslaughter and neglect of public duty over the death.

Tapes from the custody suite cameras were seized in April 1998, but a section containing monkey chants and laughter was not investigated until March 2002, a fortnight before the trial began. Mr Alder's family are furious that this evidence was never put before the jury. Last night the CPS and West Yorkshire police, who investigated the case, refused to say whether any of the officers on the tape had been questioned about who made the noises. Black fireman accuses Met of racist abuse - Crime - UK. Pc Alex MacFarlane Walks Free After Second Racial Abuse Trial Returns No Verdict. A Metropolitan Police constable accused of racially abusing a suspect following last year's August riots has been discharged after a jury failed to reach a verdict in his trial for a second time. 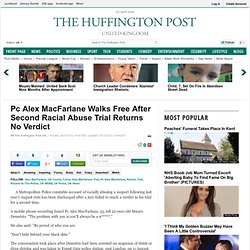 A mobile phone recording heard Pc Alex MacFarlane, 53, tell 22-year-old Mauro Demetrio: "The problem with you is you'll always be a n*****. " He also said: "Be proud of who you are. "Don't hide behind your black skin. " The conversation took place after Demetrio had been arrested on suspicion of drink or drug-driving and was taken to Forest Gate police station, east London, on 11 August. Two separate trials of MacFarlane returned no decisive verdicts Southwark Crown Court in London heard MacFarlane admit to using the word "n*****" but said it was not intended as a racist insult.

Newham police officers cleared of racial harassment - London. Pc Kevin Hughes, 42, claimed he had merely been having a discussion about evolution. 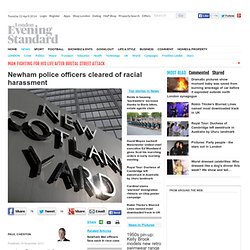 He was found not guilty by magistrates along with Pc David Hair, who is said to have asked a black female officer if she was going to go home and “cook bananas”. Hair, 36, accepted that he had used the words, but denies that he was racially motivated. Despite the verdicts at Westminster Magistrates Court, both men, who are currently suspended, face internal police disciplinary hearings. Both officers were on the Victim Offenders Location Time (VOLT) team based at Forest Gate Police Station. Hughes had made the allegedly racist remark while on patrol in Newham with fellow officers in the East End of London. Riots: Police monitor beaten in back of police van. Independent police monitor punched and kicked to the head and legs in back of police van, while monitoring policing of disturbances. 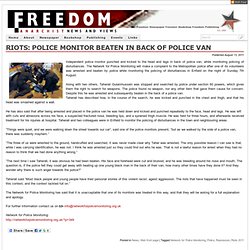 The Network for Police Monitoring will make a complaint to the Metropolitan police after one of its volunteers was arrested and beaten by police while monitoring the policing of disturbances in Enfield on the night of Sunday 7th August. Along with two others, Taherali Gulamhussein was stopped and searched by police under section 60 powers, which gives them the right to search for weapons. The police found no weapon, nor any other item that gave them cause for concern.

Despite this he was arrested and subsequently beaten in the back of a police van. Taherali has described how, in the course of the search, he was kicked and punched in the chest and thigh, and that his head was smashed against a wall. He has also said that after being arrested and placed in the police van he was held down and kicked and punched repeatedly to the face, head and legs. 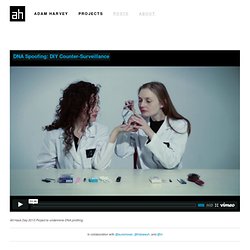 Project Summary Anticipating the future of DIY DNA Counter-Surveillance In this project, we anticipate the possibility of genetic surveillance in the post-apocalyptic present. As humans, we are constantly shedding genetic material in public space. It is becoming increasingly common to use those traces for surveillance and reconstruction. Related Work Credits Special thanks to ArtHackDay and 319Scholes Images. CV Dazzle: Camouflage From Computer Vision by Adam Harvey. The Privacy Wars: Goggles That Block Facial Recognition Technology.