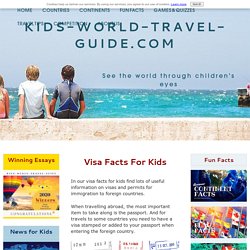 When travelling abroad, the most important item to take along is the passport. And for travels to some countries you need to have a visa stamped or added to your passport when entering the foreign country. But let's start with some explanations and then read through our fascinating facts about visas and permits. Visa Facts: What is a visa? A visa is a permit added to your passport for being allowed to travel to or to enter a foreign country.

Discovering Antarctica - interactive education for schools. Kids' Games, Animals, Photos, Stories, and More. Explorer's diaries - Discovering Antarctica. 28 May 1911 “A typical day starts at 8 for breakfast at 8.30 – tho’ some are always late… For breakfast we have porridge, tea and coffee, bread and butter and some dish such as fried seal and bacon or scrambled ‘Tru-egg’. 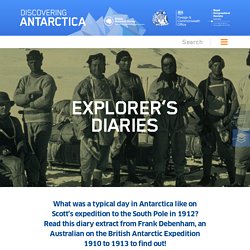 The porridge is excellent but as all 25 of us like it there is never quite enough. Afterwards I start work immediately, which consists of cutting sections, learning German, using the microscope, writing the diary or reading books. When fine I go for a walk, but walks in the dark are most uninteresting. Antarctica Quiz 1 - General Quiz. Scavenger Hunt. Postcard-1. NEW Topic Overview Arctic Adventures. North and South Poles primary resource. This primary resource introduces children to the environments of the Arctic and Antarctic through conversation with Sir David Attenborough. 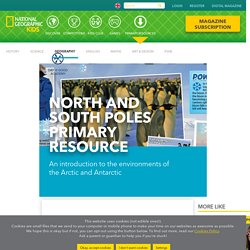 Where can you see the North and South Poles on a world map? How cold does it get in these locations? What kinds of animals live in these extreme environments? Pupils will learn about how the animals and indigenous peoples that live in the Arctic and Antarctic have adapted to survive in the environment in our National Geographic Kids’ Geography primary resource sheet. The teaching resource can be used in study group tasks for discussing the links between the water cycle and the landscape of Spotted Lake; as a printed handout for each pupil to review and annotate, or for display on the interactive whiteboard using the images included in the resource for class discussion. Activity: As a class, discuss what the children know about the North and South Poles. N.B. National Curriculum Key Stage 1 Geography objective: Pupils should be taught to:

Untitled. Canada - The Tale of the Inuit and Their Land. Wicked Weather Watch. 10 Amazing Lesson Hooks [with Printable Resources] Every beginning of any endeavour is critical, whether that be a lesson or a personal goal. 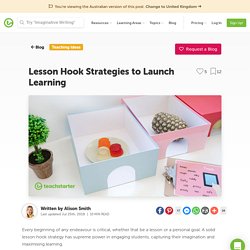 A solid lesson hook strategy has supreme power in engaging students, capturing their imagination and maximising learning. Make your classroom buzz! Subscribe to Teach Starter and access thousands of curriculum-aligned resources and digital learning tools. Get Started A lesson hook is an introduction or opening into a lesson that grabs the students’ attention. The reason that lesson hooks work so well is because they frame thinking, focus on the concept at hand and give learning objectives context. Youtube. Lessons from Africa › Global Dimension. World Gorilla Day. 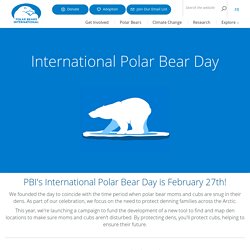 Denning is the most vulnerable time in a polar bear’s life. And in a warming Arctic, where polar bears face enormous challenges, the survival of every single cub is critically important. Polar bear cubs are born in winter in dens hidden under the snow. At birth, they are blind, weigh about one pound, and have only a light layer of fur to protect them from the cold. Families remain in the den until spring when the cubs are finally large enough to survive the rigors of outside Arctic conditions. World Penguin Day - Antarctic and Southern Ocean Coalition. April 25th is World Penguin Day. 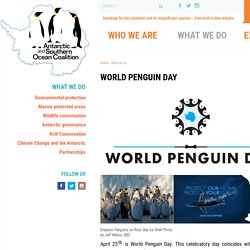 This celebratory day coincides with the annual northern migration of Adelie penguins. This intrinsic migration pattern is conserved across generations. Native to Antarctica are six breeding species, Emperor, King, Chinstrap, Adelie, Gentoo and Macaroni penguins. Most penguins are monogamous and have distinct calls, enabling them to locate their mates in large groups. Penguin species lay up to two eggs per mating season with the Emperor and King penguins laying only one egg. If ever there was a bird ready to have its own day, it's the dapper, deep-diving penguin. Zooniverse. SHOP - Tea Time Monkeys. Year 4 Classroom Antarctica. 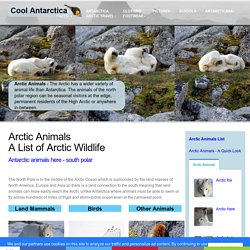