Things that have negative energy. We have all experienced “bad vibes” from another person, or a certain place, or a certain thing at some time or another. 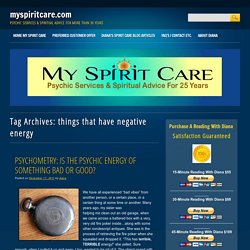 Many years ago, my sister was helping me clean out an old garage, when we came across a battered box with a very, very old fire poker inside…along with some other nondescript antiques. She was in the process of retrieving the fire poker when she squealed and dropped it. “This has terrible, TERRIBLE energy!” She yelled. Sure enough, when I pulled it up and away, I too, wanted to be rid of it. The fate of that menacing instrument was not the garbage can.

One day humanity will learn that whether something is an old piece of iron or a diamond studded treasure; whether it is deemed beautiful to the eye or not; whether it can be exchanged for paper called dollars or not: it is the energy of something that determines its worth. When it comes to having good energy around you, having things nearby that have good energy in them is also important! Clearing and Cleansing. Why Yogurt and Probiotics Make You Fat and Foggy. Your gut biome (the bacteria living in your intestines) is crucial to your health. 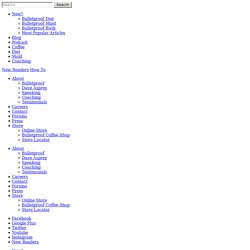 The overuse of antibiotics, diets high in processed foods, and foods containing histamines are your gut biome’s worst nightmare. When your gut bacteria get thrown off, you can develop something called histamine intolerance, which leads to increased inflammation, congestion, hives, migraines, and fatigue – just to name a few symptoms. Even if you have a lot of DAO enzymes (the molecule that breaks down histamines) you may not be able to keep up with the amount of histamines in the foods you eat, especially if you eat lots of aged and fermented foods, or microbiologically produced foods, like the standard American diet’s favorite “health food” – yogurt. If you’re already concerned about your gut bacteria, and you take probiotics to help those bacteria flourish, you may be doing the exact opposite of what you want, depending on the specific bacteria that you’re supplementing. Fire and Earth: The Origins of Reiki.

Most of those who have heard of Reiki will know it as an alternative therapy, with similarities to other healing-by-touch practices such as spiritual healing. 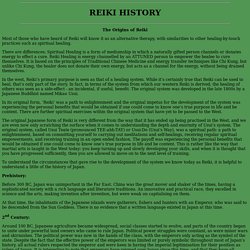 There are differences; Spiritual Healing is a form of mediumship in which a naturally gifted person channels or donates energy to effect a cure. Reiki Healing is energy channelled by an ATTUNED person to empower the healee to cure themselves. It is based on the principles of Traditional Chinese Medicine and energy transfer techniques like Chi Kung, but unlike Chi Kung, the healer does not donate their own energy, but acts as a channel for the energy, without being drained themselves.

In the west, Reiki’s primary purpose is seen as that of a healing system. While it’s certainly true that Reiki can be used to heal, that’s only part of the story. To understand the circumstances that gave rise to the development of the system we know today as Reiki, it is helpful to understand a little of the history of Japan. Prehistory: 2nd Century: Spirit Science and Metaphysics.

The Rosicrucian Cosmo-Conception or Mystic Christianity is a Rosicrucian text by Max Heindel (ISBN 0-911274-34-0) Western Wisdom Teachings[edit] The first edition was printed in November 1909. 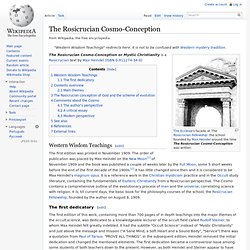 The order of publication was placed by Max Heindel on the New Moon[1] of November 1909 and the book was published a couple of weeks later by the Full Moon, some 5 short weeks before the end of the first decade of the 1900s.[2] It has little changed since then and it is considered to be Max Heindel's magnum opus. It is a reference work in the Christian mysticism practice and in the Occult study literature, containing the fundamentals of Esoteric Christianity from a Rosicrucian perspective. The Cosmo contains a comprehensive outline of the evolutionary process of man and the universe, correlating science with religion. Gnostic Media - Research & Publishing with host Jan Irvin. Where Knowledge, Understanding and Wisdom Begin. Www.dedroidify.com/introindex.htm. Shiva Shakti Mandalam: Tantrik Home Page. Beyond the Rainbow Metaphysical/New Age Catalog and Resource Guide: Index.

Essential Oils With Sensual Qualities. Ylang Ylang Oil Ylang Ylang is an essential oil that addresses sexual issues by both men and women. 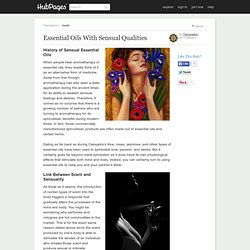 It begins by arousing emotional feelings between sexual partners, thus intensifying any inherent sexual and passionate desires that both share. Living in a Fictional World.