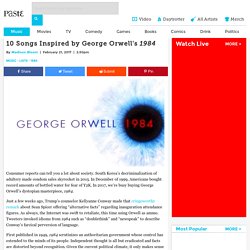 Huxley vs. Orwell: The Webcomic. Stuart McMillen’s webcomic adapts (and updates) Postman’s famous book-length essay, Amusing Ourselves to Death, which argues that Aldous Huxley’s vision of the future in Brave New World was ultimately more accurate than the one proposed by George Orwell in 1984. 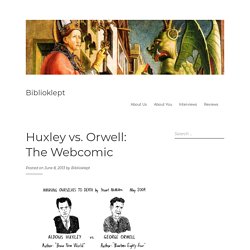 (Via). Like this: Like Loading... Related Huxley vs. George Orwell’s Nineteen Eighty-Four. So we’re in the Senate House of the University of London. This is an enormous 1930s tower that dominates the landscape that it’s over, and Orwell was interested in it, his first wife Eileen worked here, and in the Second World War it was the headquarters of the Ministry of Information, which controlled the press, propaganda and censorship. So in many ways very much like the Ministry of Truth in the novel. And he would see this building every day, and it stands proud above its landscape. 1984 Quotes by George Orwell. “Now I will tell you the answer to my question. 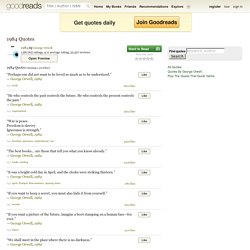 It is this. The Party seeks power entirely for its own sake. We are not interested in the good of others; we are interested solely in power, pure power. What pure power means you will understand presently. We are different from the oligarchies of the past in that we know what we are doing. So Are We Living in 1984? Since last week’s revelations of the scope of the United States’ domestic surveillance operations, George Orwell’s “Nineteen Eighty-Four,” which was published sixty-four years ago this past Saturday, has enjoyed a massive spike in sales. The book has been invoked by voices as disparate as Nicholas Kristof and Glenn Beck.

Even Edward Snowden, the twenty-nine-year-old former intelligence contractor turned leaker, sounded, in the Guardian interview in which he came forward, like he’d been guided by Orwell’s pen. But what will all the new readers and rereaders of Orwell’s classic find when their copy arrives? Is Obama Big Brother, at once omnipresent and opaque? Nineteen Eighty-Four turns sixty. THERE ARE no doubt many thousands of people who know that Oliver Twist famously said, “Please sir, I want some more.” 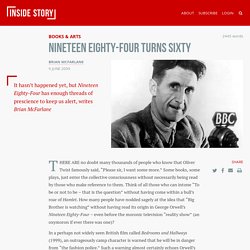 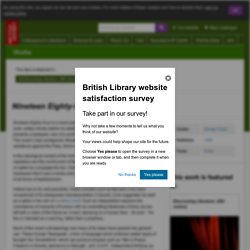 It was his last work, written shortly before his death from a tubercular haemorrhage in 1950. It presents a dystopian view of a world which has been taken over by totalitarianism. 1984: The masterpiece that killed George Orwell. "It was a bright cold day in April, and the clocks were striking thirteen. 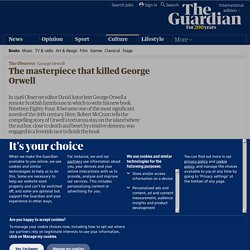 " Sixty years after the publication of Orwell's masterpiece, Nineteen Eighty-Four, that crystal first line sounds as natural and compelling as ever. But when you see the original manuscript, you find something else: not so much the ringing clarity, more the obsessive rewriting, in different inks, that betrays the extraordinary turmoil behind its composition. Probably the definitive novel of the 20th century, a story that remains eternally fresh and contemporary, and whose terms such as "Big Brother", "doublethink" and "newspeak" have become part of everyday currency, Nineteen Eighty-Four has been translated into more than 65 languages and sold millions of copies worldwide, giving George Orwell a unique place in world literature. What George Orwell's Nineteen Eighty-Four owes Yevgeny Zamyatin's We. It is a book in which one man, living in a totalitarian society a number of years in the future, gradually finds himself rebelling against the dehumanising forces of an omnipotent, omniscient dictator. 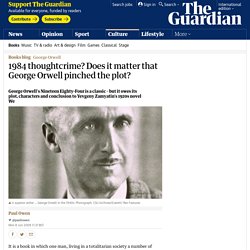 Encouraged by a woman who seems to represent the political and sexual freedom of the pre-revolutionary era (and with whom he sleeps in an ancient house that is one of the few manifestations of a former world), he writes down his thoughts of rebellion – perhaps rather imprudently – as a 24-hour clock ticks in his grim, lonely flat. In the end, the system discovers both the man and the woman, and after a period of physical and mental trauma the protagonist discovers he loves the state that has oppressed him throughout, and betrays his fellow rebels.

The story is intended as a warning against and a prediction of the natural conclusions of totalitarianism. Freedom or oppression? The fear of dystopia. Nineteen Eighty-Four and the politics of dystopia. Roger Luckhurst describes the political environment in which George Orwell wrote and published Nineteen Eighty-Four, and analyses its different – and often opposing – interpretations. 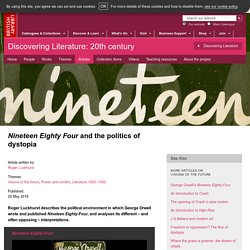 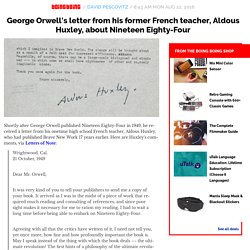 Here are Huxley's comments, via Letters of Note: Wrightwood. Cal. 21 October, 1949 Dear Mr. Orwell, It was very kind of you to tell your publishers to send me a copy of your book. It arrived as I was in the midst of a piece of work that required much reading and consulting of references; and since poor sight makes it necessary for me to ration my reading, I had to wait a long time before being able to embark on Nineteen Eighty-Four. George Orwell's notes for Nineteen Eighty-Four. Orwell's review of Assignment in Utopia, from New English Weekly. Orwell Diaries 1938-1942. A collection of pamphlets, mainly political, formed by George Orwell. During the mid-1930s and 40s George Orwell became an avid collector of pamphlets. 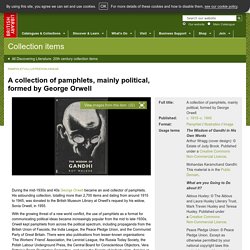 His astounding collection, totalling more than 2,700 items and dating from around 1915 to 1945, was donated to the British Museum Library at Orwell’s request by his widow, Sonia Orwell, in 1955. With the growing threat of a new world conflict, the use of pamphlets as a format for communicating political ideas became increasingly popular from the mid to late-1930s.

Simpler Terms; If It's 'Orwellian,' It's Probably Not. But Orwell is the writer most responsible for diffusing the modern view of political language as an active accomplice of tyranny. As he wrote in ''Politics and the English Language,'' ''Political language . . . is designed to make lies sound truthful and murder respectable, and to give an appearance of solidity to pure wind.'' That was an appealing notion to an age that had learned to be suspicious of ideologies, and critics on all sides have found it useful to cite ''Politics and the English Language'' in condemning the equivocations of their opponents. Critics on the left hear Orwellian resonances in phrase like ''weapons of mass protection,'' for nonlethal arms, or in names like the Patriot Act or the Homeland Security Department's Operation Liberty Shield, which authorizes indefinite detention of asylum-seekers from certain nations.

Which of those terms are deceptive packaging and which are merely effective branding is a matter of debate. Hear the Very First Adaptation of George Orwell's 1984 in a Radio Play Starring David Niven (1949) Since George Orwell published his landmark political fable 1984, each generation has found ample reason to make reference to the grim near-future envisioned by the novel. Haunting Illustrations for Orwell’s Nineteen Eighty-Four, Introduced by the Courageous Journalist Who Broke the Edward Snowden Story. Few things in creative culture are more enchanting than an artist’s interpretation of a beloved book. 1984 Orwell PPT. 1984 part 1 notes.