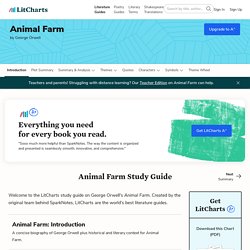 He was educated at Eton in England and from 1922-27, he served in the Indian Imperial Police in Burma. Animal Farm Quotes. Beasts of England, beasts of Ireland, Beasts of every land and clime, Hearken to my joyful tidings Of the golden future time. 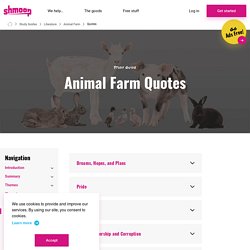 Soon or late the day is coming, Tyrant Man shall be o'erthrown, And the fruitful fields of England Shall be trod by beasts alone. Rings shall vanish from our noses, And the harness from our back, Bit and spur shall rust forever, Cruel whips no more shall crack. Riches more than mind can picture, Wheat and barley, oats and hay, Clover, beans, and mangel-wurzels Shall be ours upon that day.

Bright will shine the fields of England, Purer shall its waters be, Sweeter yet shall blow its breezes On the day that sets us free. For that day we all must labour, Though we die before it break; Cows and horses, geese and turkeys, All must toil for freedom's sake. The Real George Orwell (1/6) Animal Farm Video Summary. George Orwell. Animal Farm Visual Representation of Characters. Summary & Analysis.

Timeline of Animal Farm compared to Russian Revolution - gunzjrsite. Animal Farm Study Guide. Orwellian. Pertaining to a dystopia like in George Orwell's fiction "Orwellian" is an adjective describing a situation, idea, or societal condition that George Orwell identified as being destructive to the welfare of a free and open society. 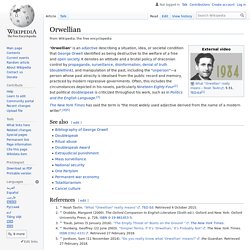 It denotes an attitude and a brutal policy of draconian control by propaganda, surveillance, disinformation, denial of truth (doublethink), and manipulation of the past, including the "unperson"—a person whose past existence is expunged from the public record and memory, practiced by modern repressive governments. Often, this includes the circumstances depicted in his novels, particularly Nineteen Eighty-Four[2] but political doublespeak is criticized throughout his work, such as in Politics and the English Language.[3] The New York Times has said the term is "the most widely used adjective derived from the name of a modern writer".[4][5] See also[edit] References[edit] External links[edit] Finding Orwell in Burma. Animal Farm Introduction. Animal Farm Introduction Want more deets? 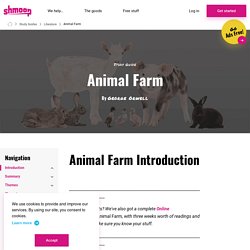 We've also got a complete Online Course about Animal Farm, with three weeks worth of readings and activities to make sure you know your stuff. Move over, Babe and Wilbur: there's a new talking pig in town. In fact, there are a lot of talking pigs. And talking horses and birds and cows, for that matter. Today, Animal Farm is a classic. Context: Summary Analysis. Symbols: Summary Overview & Analysis. Motifs: Summary Analysis. 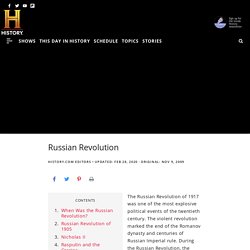 The violent revolution marked the end of the Romanov dynasty and centuries of Russian Imperial rule. During the Russian Revolution, the Bolsheviks, led by leftist revolutionary Vladimir Lenin, seized power and destroyed the tradition of csarist rule. The Bolsheviks would later become the Communist Party of the Soviet Union. When Was the Russian Revolution? In 1917, two revolutions swept through Russia, ending centuries of imperial rule and setting into motion political and social changes that would lead to the formation of the Soviet Union. In the early 1900s, Russia was one of the most impoverished countries in Europe with an enormous peasantry and a growing minority of poor industrial workers.

Much of Western Europe viewed Russia as an undeveloped, backwards society. Russian revolutionary traditions. Socialists parties like the Bolsheviks and Mensheviks emerged in the early 20th century – but they were not Russia’s first revolutionary groups. 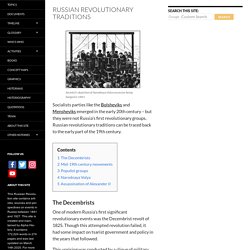 Russian revolutionary traditions can be traced back to the early part of the 19th century. The Decembrists One of modern Russia’s first significant revolutionary events was the Decembrist revolt of 1825. Though this attempted revolution failed, it had some impact on tsarist government and policy in the years that followed. This uprising was conducted by a clique of military officers against the newly crowned Nicholas I. The Decemberists gathered in St Petersburg with a force of 3,000 men and called on the city’s garrison to join them.

The Decembrist uprising was more a dispute between aristocratic factions and interests than a genuine democratic or socialist revolution, however, many of its participants were liberal reformists. Mid-19th century movements. Vladimir Lenin. Vladimir Lenin (1870-1924) was the founder and ideological mentor of the Bolshevik movement, the leader of the October Revolution and the first ruler of Soviet Russia. 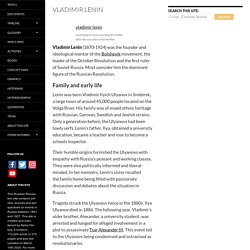 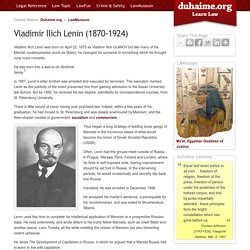 He was born into a well-to-do Simbirsk family.1 In 1887, Lenin's older brother was arrested and executed for terrorism. The execution marked Lenin as the publicity of the event prevented him from gaining admission to the Kazan University law School. But by 1892, he received his law degree, admittedly by correspondence courses, from St. Petersburg University. There is little record of Lenin having ever practised law. Vladimir Lenin. Lenin’s real name was Vladimir Illych Ulyanov. 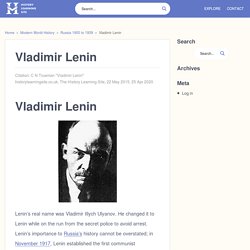 He changed it to Lenin while on the run from the secret police to avoid arrest. Lenin’s importance to Russia’s history cannot be overstated; in November 1917, Lenin established the first communist government when he overthrew the Provisional Government. Vladimir Lenin. Vladimir Illich Ulyanov (later known as Lenin) was born in Simbirsk, Russia, on 10th April, 1870. 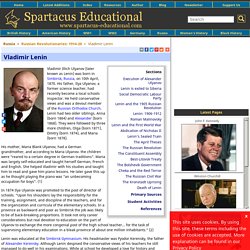 His father, Ilya Ulyanov, a former science teacher, had recently become a local schools inspector. He held conservative views and was a devout member of the Russian Orthodox Church. Lenin had two older siblings, Anna (born 1864) and Alexander (born 1868). They were followed by three more children, Olga (born 1871), Dmitry (born 1874), and Maria (born 1878). His mother, Maria Blank Ulyanov, had a German grandmother, and according to Maria Ulyanov. the children were "reared to a certain degree in German traditions".