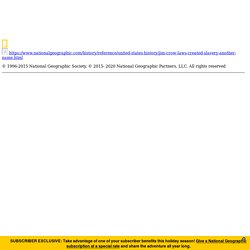 But when surgeons in his Atlanta hospital found out he had black ancestry, they kicked him out mid-examination, shipping him across the street to a black hospital despite the pouring rain. He died in the overcrowded, underfunded hospital days later. The year was 1931, and like hundreds of thousands of other black people in the segregated South, White was a victim of Jim Crow segregation laws. Between the 1870s and the 1960s, Jim Crow laws upheld a vicious racial hierarchy in southern states, circumventing protections that had been put in place after the end of the Civil War—such as the 15th Amendment, which gave black men the right to vote 150 years ago this week.

The discriminatory laws denied black people their rights, subjected them to public humiliation, and perpetuated their economic and educational marginalization. The term has origins in the 1820s, when white comedian Thomas Rice created the character “Jim Crow.” Joan Baez - CBS 60 Minutes Interview with Mike Wallace (1986) 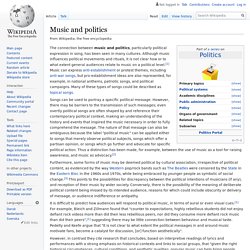 Although music influences political movements and rituals, it is not clear how or to what extent general audiences relate to music on a political level.[1] Music can express anti-establishment or protest themes, including anti-war songs, but pro-establishment ideas are also represented, for example, in national anthems, patriotic songs, and political campaigns. Many of these types of songs could be described as topical songs. Songs can be used to portray a specific political message. However, there may be barriers to the transmission of such messages; even overtly political songs are often shaped by and reference their contemporary political context, making an understanding of the history and events that inspired the music necessary in order to fully comprehend the message. Folk music[edit] American folk revival[edit] Musician Social Activists. Click here for Holly Near's lists of "Social Change Artists. 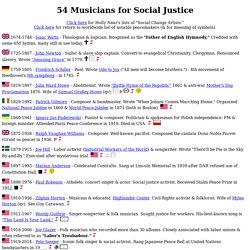 "Click here for return to worldwide list of notable peacemakers (& for meaning of symbols). 1674-1748 - Isaac Watts - Theologian & logician. Rcognised as the "Father of English Hymnody. " Credited with some 650 hymns, many still in use today. 1725-1807 - John Newton - Sailor & slave ship captain. 1819-1897 - Julia Ward Howe - Abolitionist. 1829-1892 - Patrick Gilmore - Composer & bandmaster. Musicians Who Are Making Their Voices Heard Through Activism. Activism, organizations, and social movements have existed for many years, well before they were even given those identities. 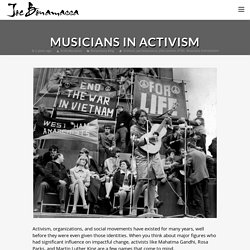 When you think about major figures who had significant influence on impactful change, activists like Mahatma Gandhi, Rosa Parks, and Martin Luther King are a few names that come to mind. Many movements and their leaders come about in conjunction with a fundamental issue in society. From the Counter Culture to the Civil Rights Movement, there have been many culturally significant social change revolutions in our history.

Beyond those movements that have remained prominent throughout history, individuals are making a difference in various ways throughout the world. Whether you start an organization, donate to a cause, or even make your voice heard, you are contributing to beneficial change, no matter how small it may seem. Causes and social movements are especially more powerful when celebrities get their message out in the public. John Lennon Bono Dave Matthews. Tracy Chapman. American singer-songwriter and guitarist Early life[edit] Chapman was born in Cleveland, Ohio. 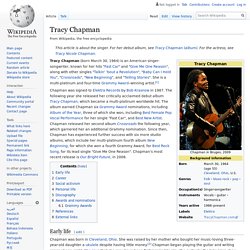 She was raised by her mother who bought her music-loving three-year-old daughter a ukulele despite having little money.[2] Chapman began playing the guitar and writing songs at age eight. She says that she may have been first inspired to play the guitar by the television show Hee Haw.[3] Raised as a Baptist, Chapman attended an Episcopal high school[3] and was accepted into the program A Better Chance, which sponsors students at college preparatory high schools away from their home community. Career[edit] During college, Chapman began busking in Harvard Square and playing guitar in Club Passim, the Nameless Coffeehouse, and other coffeehouses in Cambridge, Massachusetts.