An Old Building In Tuscany Gets A Contemporary Interior. Roy David Studio have completed the transformation of an old stone stable, in Marche di Fermo, Italy, into a holiday home with a contemporary white interior. 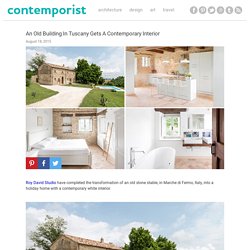 The project description Motelparo villa is located in the romantic landscape of great Tuscany. The preserved villa functions as the ideal private vacation resort. The architect Ilana David, partner at Roy David Studio, was motivated to transform the old stable into the desired vacation house by preserving its original structural style. The villa is located in amazing wheat and sunflower fields. In order to overcome the strict preservation laws, each of the original stones which constructed the old stable facades was numbered, disassembled and reconstructed after being validated for it structural strength. 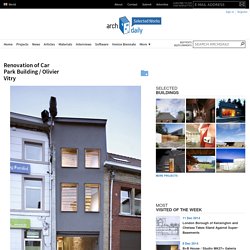 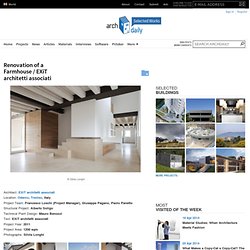 The first step was to remove. To remove the annexes and all elements that had been added through the years to the original structure, such as the wall plugs used to close the arches and the interior divisions that hid the original dimensions. Inner spaces were re-organized following a new hierarchy based on the pre-existing spatial values of the building plan that had never been exploited due to the discontinuous and fragmented use of spaces and depots. 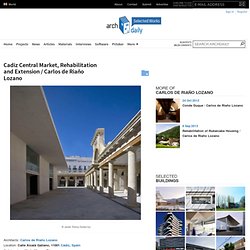 It is one the first buildings built in Spain to regulate and house the sale of perishable products, until then in the hands of street vendors. It is a contemporary of the Encarnación market in Seville and the Puerto Real market, and previous to the markets that were built in Madrid, Barcelona and Santander after 1840. The building is a transition between the open square and what later would be covered market squares. With that massive inner structure that alienated the original architecture and hid its values, it was difficult to distinguish the two periods. Conversion of Castel Mirabel in Olgiasca / Met architektur. Architects: Met Architektur Location: Lake Como, Italy Architect In Charge: Dominique Lorenz, Daniel Hummel Collaborator: Fabian Valverde Area: 348.0 sqm Year: 2012 Photographs: Ulrich Stockhaus From the architect. 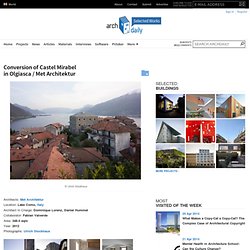 The CastelMirabel, sited on the highest point of the historic centre of Olgiasca, on the Piona peninsula, and whose foundations date from the 13th century, was purchased and converted in1975 by the owner at the time. It was sold to the new owner in 2008. The impetus for the current project was the intention to divide the building, conceived as a single unit, into two completely separate residences. Each residence received a separate entrance and its own terrace. A 15th-Century Church Gets Transformed Into A Modern Bookstore. The Netherlands, Utrecht-based BK. 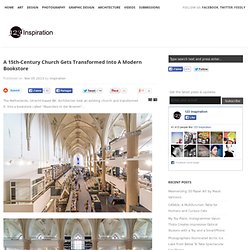 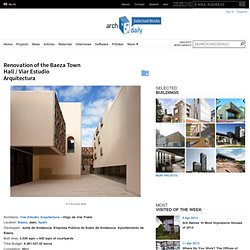 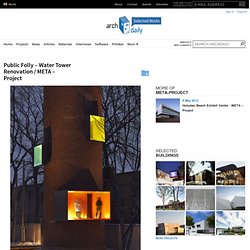 Area: 30 sqm Year: 2012 Photographs: Chen Su From the architect. META-Project, a Beijing based research-design studio has recently completed a renovation for VANKE in Shenyang, China that infused new life into the dilapidated water tower in an exquisite manner. This water tower is located in the campus of a run down military factory, formerly known as the People’s Liberation Army No.1102 Factory, founded in 1959 during the Great Leap Forward. 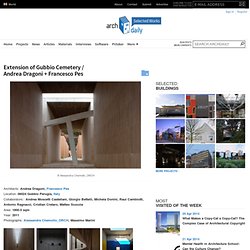 Metro Makeovers for the Abandoned Stations of Paris. Anyone who wants to make a swimming pool out of an abandoned metro station neglected for 75 years, has definitely got my attention. 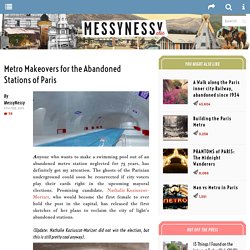 The ghosts of the Parisian underground could soon be resurrected if city voters play their cards right in the upcoming mayoral elections. Promising candidate, Nathalie Koziuscot-Morizet, who would become the first female to ever hold the post in the capital, has released the first sketches of her plans to reclaim the city of light’s abandoned stations. (Update: Nathalie Koziuscot-Morizet did not win the election, but this is still pretty cool anyway). Up on the candidate’s drawing board we have several proposals to revive the stations from their solitude, including my personal favourite, the swimming pool (just imagine doing laps down an old subway track), a theatre (think of the acoustics), a restaurant, an art gallery and a nightclub.

This is what the station used as a model in the architect’s sketches currently looks like today… Sereine by Septembre. Lina Lagerström of Septembre Architecture transformed an old farmhouse into a rustic summer home. She aimed to keep as much as possible of the old structure while adapting it to a new use. Discrete interventions on the internal fittings and use of rugged materials with natural appearance allows for a gentle preservation of the initial appearance of the building.