Berkshelf. Who Were the Religious Leaders of Jesus's Day? The Priesthood In first century Palestine there was no separation between church and state. 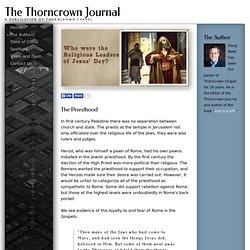 The priests at the temple in Jerusalem not only officiated over the religious life of the Jews, they were also rulers and judges. Herod, who was himself a pawn of Rome, had his own pawns installed in the Jewish priesthood. By the first century the election of the High Priest was more political than religious. The Romans wanted the priesthood to support their occupation, and the Herods made sure their desire was carried out. “Then many of the Jews who had come to Mary, and had seen the things Jesus did, believed in Him. Josephus recorded that the priesthood went so far as to authorize a daily sacrifice for Caesar in the temple.

The priesthood lived in luxury well beyond that of the average man. “…impressive archeological remains of their Jerusalem residences show how elegant their life style had become. The priests lived lavish lifestyles while the average Jewish peasant struggled to survive. Getting started with Chef report and exception handlers. This post is for people who want to use or write their first Chef report handler, but aren’t sure where to begin. 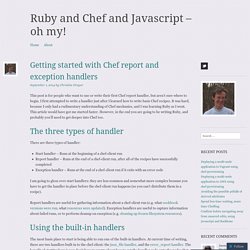 I first attempted to write a handler just after I learned how to write basic Chef recipes. It was hard, because I only had a rudimentary understanding of Chef mechanics, and I was learning Ruby as I went. This article would have got me started faster. However, in the end you are going to be writing Ruby, and probably you’ll need to get deeper into Chef too. There are three types of handler: Start handler – Runs at the beginning of a chef-client runReport handler – Runs at the end of a chef-client run, after all of the recipes have successfully completedException handler – Runs at the end of a chef-client run if it exits with an error code I am going to gloss over start handlers: they are less common and somewhat more complex because you have to get the handler in place before the chef-client run happens (so you can’t distribute them in a recipe). Running the json_file handler. About Attributes. An attribute is a specific detail about a node. 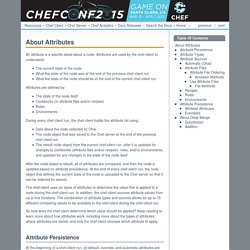 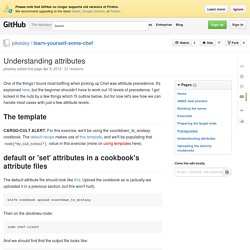 It's explained here, but the beginner shouldn't have to work out 10 levels of precedence. I got kicked in the nuts by a few things which I'll outline below, but for now let's see how we can handle most cases with just a few attribute levels: The template CARGO-CULT ALERT. For this exercise, we'll be using the countdown_to_ecstasy cookbook. About Handlers. Use a handler to identify situations that arise during a chef-client run, and then tell the chef-client how to handle these situations when they occur. 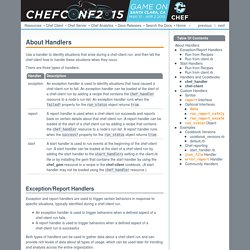 Both types of handlers can be used to gather data about a chef-client run and can provide rich levels of data about all types of usage, which can be used later for trending and analysis across the entire organization. Exception and report handlers are made available to the chef-client run in one of the following ways: Ruby Tutorial with Code Samples. Chef Server. Learning Chef - Part 1 - Nathen Harvey. Learning Chef – Mathias Lafeldt. September 11, 2012 I’m currently in the process of learning Chef – the infrastructure automation framework by Opscode – and wanted to share some of the things I’ve picked up along the way. 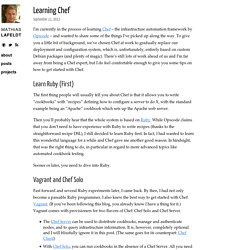 To give you a little bit of background, we’ve chosen Chef at work to gradually replace our deployment and configuration system, which is, unfortunately, entirely based on custom Debian packages (and plenty of magic). There’s still lots of work ahead of us and I’m far away from being a Chef expert, but I do feel comfortable enough to give you some tips on how to get started with Chef. Learn Ruby (First) The first thing people will usually tell you about Chef is that it allows you to write “cookbooks” with “recipes” defining how to configure a server to do X, with the standard example being an “Apache” cookbook which sets up the Apache web server. Style Guide.

Ruby Basics This section covers the basics of Ruby. 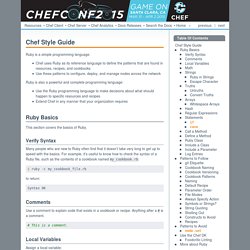 Verify Syntax Many people who are new to Ruby often find that it doesn’t take very long to get up to speed with the basics. For example, it’s useful to know how to check the syntax of a Ruby file, such as the contents of a cookbook named my_cookbook.rb: $ ruby -c my_cookbook_file.rb. DevOps Cafe Podcast & Videos - Show Notes. Berkshelf and Chef Cookbook Dependencies. Greetings, readers! 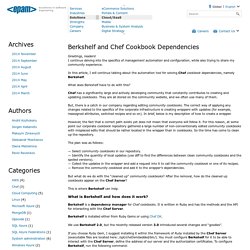 I continue delving into the specifics of management automation and configuration, while also trying to share my community experience. In this article, I will continue talking about the automation tool for solving Chef cookbook dependencies, namely Berkshelf. A knife.rb for our time - Automate All the Things! Ohai Chefs! 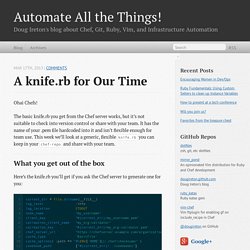 The basic knife.rb you get from the Chef server works, but it’s not suitable to check into version control or share with your team. It has the name of your .pem file hardcoded into it and isn’t flexible enough for team use. Chef-shell (executable) — Chef Docs. Chef-shell is a recipe debugging tool that allows the use of breakpoints within recipes. chef-shell runs as an Interactive Ruby (IRb) session. chef-shell supports both recipe and attribute file syntax, as well as interactive debugging features. 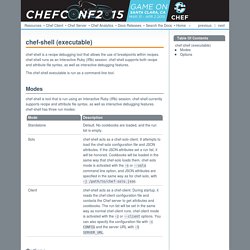 This allows authentication requests to be made to the Chef server by any entity that uses the Chef server API, such as the chef-client and knife. Note Review the list of common options available to this (and all) knife subcommands and plugins. bulk delete Use the bulk delete argument to delete any API client that matches a pattern defined by a regular expression. Syntax This argument has the following syntax: Installation/OS Specific Notes/Installing Amanda on Mac OS X. From The Open Source Backup Wiki (Amanda, MySQL Backup, BackupPC) Amanda has been tested on Mac OS X Panther (10.3), Tiger (10.4), Leopard (10.5) and Snow Leopard (10.6).

With Panther, the built-in tar does not record extended filesystem attributes (resource forks, finder flags, ACLs, and so on), so users who want to be able to restore those attributes will need to do some extra work (see below). Knife client — Chef Docs. Networking - Vagrant Documentation. In order to access the Vagrant environment created, Vagrant exposes some high-level networking options for things such as forwarded ports, connecting to a public network, or creating a private network. The high-level networking options are meant to define an abstraction that works across multiple providers. This means that you can take your Vagrantfile you used to spin up a VirtualBox machine and you can reasonably expect that Vagrantfile to behave the same with something like VMware. You should first read the basic usage page and then continue by reading the documentation for a specific networking primitive by following the navigation to the left.

If Mathias had to choose the one Internet meme that best describes his work, it would certainly be Automate all the things! For at least as long as Ruby has been popular among web developers, it has also been recognized as a useful tool for system administration work. Although it was first used as a clean alternative to Perl for adhoc scripting, Ruby quickly evolved to the point where it became an excellent platform for large scale infrastructure automation projects. In this article, we'll explore realistic code that handles various system automation tasks, and discuss what benefits the automated approach has over doing things the old-fashioned way.

We'll also see first-hand what it means to treat "infrastructure as code", and the impact it has on building maintainable systems. How To Use Roles and Environments in Chef to Control Server Configurations. Introduction. Git - the simple guide - no deep shit! Git - the simple guide. Ruby DSL Handbook - the ebook about creating Ruby code that speaks your language while avoiding metaprogramming hell. Written by Jim Gay.

Cooking with Chef, part 2. By Hart Hoover - Posted on Jan 16 2013 Continuing the series on Chef that I started in part one, you should now have an account with Opscode and a working knife install. In this post, I will explain how cookbooks and roles work and we will deploy our first application with Chef. <! -- more --> Cookbooks? That's right, Emeril Lagasse, managing infrastructure with Chef means you are using cookbooks. About the Recipe DSL — Chef Docs.

The Recipe DSL is a Ruby DSL that is primarily used to declare resources from within a recipe. How To Create Simple Chef Cookbooks to Manage Infrastructure on Ubuntu. Introduction. Iptables/README.md at master · opscode-cookbooks/iptables. A Brief Chef Tutorial (From Concentrate) - A Fistful of Servers. Blog Archive - Food Fight.

An Overview of Chef — Chef Docs. Walkthrough: Register an Instance from Your Workstation - AWS OpsWorks. Configure a package and service - Learn the Chef basics on Red Hat Enterprise Linux - Error. Cooking Infrastructure by Chef. About the Recipe DSL. Sethvargo/chef-sugar. Why Chef Should Manage Deploying Your Application.