Healthy Lifestyles. Sport & Recreation Research & Knowledge. Volunteers. Social Marketing & Advocacy. After years of intensive analysis, Google discovers the key to good teamwork is being nice — Quartz. Today is the day we switch the system on. 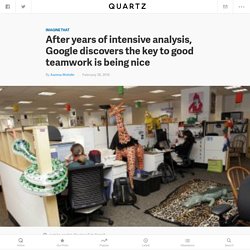 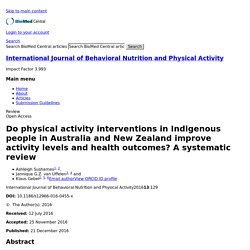 Five additional records were identified through backward [39] and forward citation tracking [40, 41, 42, 43] and three through searching the grey literature. After removing duplicates, 287 records were screened and 17 articles were initially considered eligible. Reasons for the exclusion of articles included studies that were based on animal research, were not conducted in Australia or New Zealand or did not have any physical activity components, e.g. a nutrition only intervention. After further consideration, the three studies from the grey literature were excluded due to insufficient information on, and lack of, comparability of pre and post measures of physical activity or health outcomes [44, 45, 46]. Figure 1 shows the flow diagram of the study selection process. Appraisal of Study Quality Population. Focus on: local delivery pilots. Every town, city or rural area is unique – and the characteristics of each can have a direct influence on what the sporting offer is like for a customer. 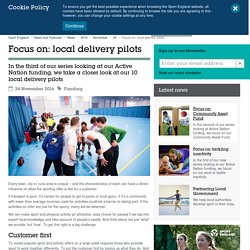 If transport is poor, it’s harder for people to get to parks or local gyms. If it’s a community with lower than average incomes, paid-for activities could be a barrier to taking part. If the activities on offer are just for the sporty, many will be deterred. Black History Month: getting people active. "I don’t feel under pressure – it’s OK if I drop the ball," says Danielle Allen as she gets ready to head out for her next netball session. 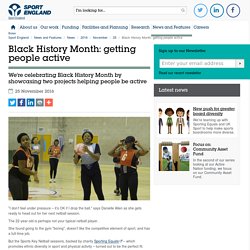 The 22-year-old is perhaps not your typical netball player. Sports Think Tank - Opening up sport to new markets: The Impact of Technology. Modernising the way people search and book sports is essential to opening up sport and physical activity (PA) to the mass market. 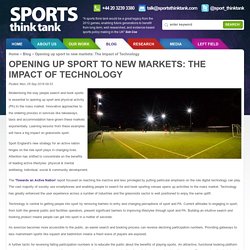 Innovative approaches to the ordering process in services like takeaways, taxis and accommodation have grown these markets exponentially. Learning lessons from these examples will have a big impact on grassroots sport. Sport England's new strategy for an active nation hinges on the role sport plays in changing lives. Attention has shifted to concentrate on the benefits of leading active lifestyles: physical & mental wellbeing; individual, social & community development. The 'Towards an Active Nation' report focused on reaching the inactive and less privileged by putting particular emphasis on the role digital technology can play. Towards an active nation - Combat inactivity - Sport England. 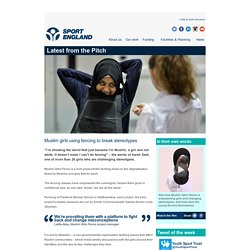 The fencing classes have empowered the schoolgirls, helped them grow in confidence and, as one said, shows “we are all the same”. Running at Frederick Bremer School in Walthamstow, east London, the pilot project’s weekly sessions are run by former Commonwealth Games fencer Linda Strachan. It is led by Maslaha – a non-governmental organisation tackling issues that affect Muslim communities – which holds weekly discussions with the girls around their identities and the day-to-day challenges they face. “People think Muslims are dangerous, they’re terrorists, their parents are strict, they can’t do sport,” says participant Sarah. The surprising obstacles to getting more women into competitive sport. Kicking goals for multiculturalism on the footy field. AFL program encourages cultural diversity on and off the football field Children from culturally and linguistically diverse (CaLD) backgrounds are developing a passion for Australia's national sport thanks to the West Australian Football Commission's Welcome to AFL program. 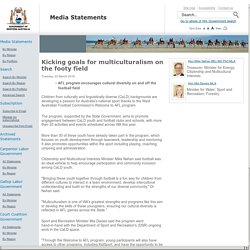 The program, supported by the State Government, aims to promote engagement between CaLD youth and football clubs and schools, with more than 20 activities and events scheduled across WA this year. Sport & Belonging - Community Foundations of Canada. Sport & Belonging Exploring connections to the community. New strategy to tackle inactivity. Beyond Sport - Network. Donnelly en kt.

Time scarcity is a slippery slope to inactivity. Even though most Australians know we need to exercise more, many of us don’t. 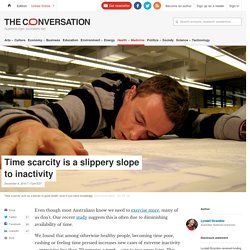 Our recent study suggests this is often due to diminishing availability of time. We found that among otherwise healthy people, becoming time poor, rushing or feeling time pressed increases new cases of extreme inactivity – exercising less than 30 minutes a week – one to two years later. This occurred for around 5% of our study population. Decreasing income exacerbated inactivity due to rising time pressure. In people who became both time and income poor, one in five of them became extremely inactive. Mind, the mental health charity - help for mental health problems.

Can action sports help make a better world? What can we learn from England about getting active and moving more? In 2014, Public Health England worked with more than 1,000 individuals and organisations to develop a national physical activity framework, Everybody Active, Every Day. 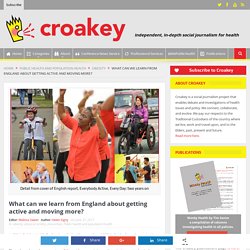 They also released an overview of the evidence on interventions to increase physical activity and a toolkit for MPs. This encouraged politicians to lead by example – in being both a role model as well as an advocate; for example, for active transport, for encouraging workplaces to support activity, and for care homes to support older people to stay active. Two years later, an update on the framework’s implementation reported encouraging results. Between 2013 and 2015, it said there had been a statistically significant one percent increase in the proportion of the population across local areas achieving the recommended 150 minutes of moderate intensity physical activity each week.

“This represents over half a million more people whose health and wellbeing is benefiting from being active every day. Basketball NZ wins innovation excellence award - NZ Herald. Basketball New Zealand has been recognised for its partnership with Glory League, when the organisation won the Innovation Excellence award at the tenth anniversary Sport and Recreation Awards in Auckland last night. 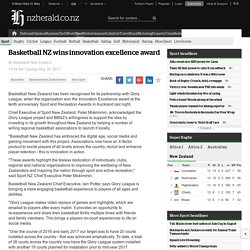 Chief Executive of Sport New Zealand, Peter Miskimmin, acknowledged the Glory League project and BBNZ's willingness to support the idea by investing in its growth throughout New Zealand by helping a number of willing regional basketball associations to launch it locally. "Basketball New Zealand has embraced the digital age, social media and gaming movement with this project. Associations now have an X-factor product to excite players of all levels across the country, recruit and enhance player retention - this is innovation in action.

Active (Outdoor) Recreation. Older / retiree populations. The Rise Of Adaptive Sports. The following interview was conducted by Joe Favorito. Joe has over 30 years of strategic communications / marketing, business development and public relations expertise in sports, entertainment, brand building, media training, television, athletic administration and business. He is a producer of award winning and cutting edge programs designed to increase ROI and minimize cost. As a society we continue to like our sports bigger, faster and stronger. Sport for social development. The LOOK study The LOOK study. Future Proofing Sport 20170125.