Celebs Hanged from Doorknob, Hollywood Pedophile Whistleblowers. Hanging From Doorknobs: 12 Pedophile Related Celebrity 'Suicides' So Far. On 13th June 2018 @ 1.40pm © press Following the tragic death of CNN reporter Anthony Bourdain last week, attention is being drawn to the way in which he died, and the mind-blowing similarities between his 'suicide' and the eerily similar circumstances that other celebrities have been found dead. 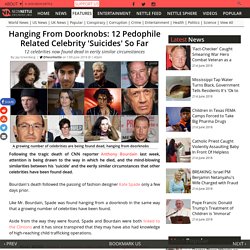 Bourdain's death followed the passing of fashion designer Kate Spade only a few days prior. Like Mr. Bourdain, Spade was found hanging from a doorknob in the same way that a growing number of celebrities have been found. Aside from the way they were found, Spade and Bourdain were both linked to the Clintons and it has since transpired that they may have also had knowledge of high-reaching child trafficking operations.

READ MORE: Clinton Foundation Haiti Links to Kate Spade's Death Exposed And this common thread doesn't end with our most recent loses, as the doorknob hanging method for celebrities with some form of pedophilia-related information seems to be a reoccurring theme. L’Ren Scott She was 49. 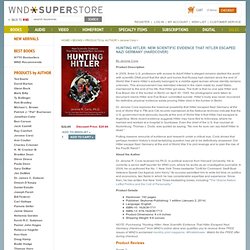 This announcement has rekindled interest in the claim made by Josef Stalin, maintained to the end of his life, that Hitler got away. The truth is that no one saw Hitler and Eva Braun die in the bunker in Berlin on April 30, 1945. No photographs were taken to document claims Hitler and Eva Braun committed suicide. Dr. Putting massive amounts of evidence and research under a critical eye, Corsi shows that perhaps modern history’s most tantalizing question has yet to be definitively answered: Did Hitler escape Nazi Germany at the end of World War II to plot revenge and to plan the rise of the Fourth Reich? About the Author Dr. Product Details. The Martin Luther King Jr. Center for Nonviolent Social Change. About the Trial After four weeks of testimony and over 70 witnesses in a civil trial in Memphis, Tennessee, twelve jurors reached a unanimous verdict on December 8, 1999 after about an hour of deliberations that Dr. 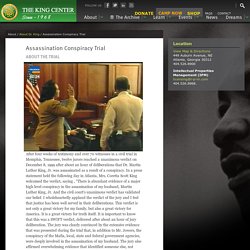 Martin Luther King, Jr. was assassinated as a result of a conspiracy. In a press statement held the following day in Atlanta, Mrs. Coretta Scott King welcomed the verdict, saying , “There is abundant evidence of a major high level conspiracy in the assassination of my husband, Martin Luther King, Jr. And the civil court's unanimous verdict has validated our belief. Transcripts View Full Trial Transcript> View Transcript of King Family Press Conference on the Verdict> King FAMILY STATEMENT ON MEDIA REQUESTS REGARDING THE MEMPHIS VERDICT The King family stands firmly behind the civil trial verdict reached by twelve jurors in the Memphis, Tennessee courtroom on December 8, 1999. Zimmerman Trial context: US government guilty of assassinating Dr. Martin King.

US government “leadership” lie when people like President Obama speak in empathy for Trayvon Martin, saying he could look like a son, while heartlessly drone-killing 16-year-old American Abdul al-Awlaki, wiping imaginary tears with middle fingers on such occasions. 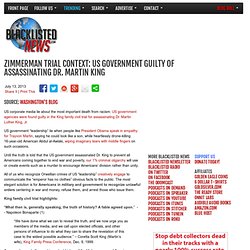 Until the truth is told that the US government assassinated Dr. King to prevent all Americans coming together to end war and poverty, our 1% criminal oligarchy will use or create events such as a murder to encourage Americans’ division rather than unity. All of us who recognize Orwellian crimes of US “leadership” creatively engage to communicate the “emperor has no clothes” obvious facts to the public. The most elegant solution is for Americans in military and government to recognize unlawful orders centering in war and money, refuse them, and arrest those who issue them. Michael Hastings Cover-Up Confirmed - San Diego 6 - Investigative Report On Michael Hastings Crash.