WATCH: Dept Retrained How NOT to Kill and It's Working — Cops Kill No One Since 2015. Salt Lake City, UT — It’s a tale of two Michael Brown’s, one a police chief for Salt Lake City, the other deceased, killed by Ferguson, MO police officer Darren Wilson. 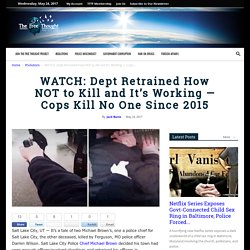 Salt Lake City Police Chief Michael Brown decided his town had seen enough officer-involved shootings and retrained his officers in de-escalation of force techniques. “Can I shot this guy,” Wilson asked himself as Brown was allegedly punching him through his cruiser’s window. Wilson went on to shoot and kill the unarmed Michael Brown, a shooting which touched off grassroots protests throughout the country objecting to police brutality and the escalation of force implemented by nearly all of the nation’s police forces. Eight Policies That Prevent Police Brutality – Validated Independent News. Program to Help Addicts Instead of Jail Them So Effective, 200 Police Depts Across US Have Adopted It.

The problem of the war on drugs can be summed up in one phrase – it’s a war on people. 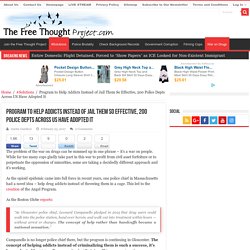 While far too many cops gladly take part in this war to profit from civil asset forfeiture or to perpetuate the oppression of minorities, some are taking a decidedly different approach and it’s working. As the opioid epidemic came into full force in recent years, one police chief in Massachusetts had a novel idea – help drug addicts instead of throwing them in a cage. This led to the creation of the Angel Program. As the Boston Globe reports: “As Gloucester police chief, Leonard Campanello pledged in 2015 that drug users could walk into the police station, hand over heroin, and walk out into treatment within hours — without arrest or charges.

Campanello is no longer police chief there, but the program is continuing in Gloucester. We Asked 3 Veteran Cops What They Would Do to Reduce Police Shootings. Patrick Hilsman, The InfluenceWaking Times Editor’s Note: This article was originally published by The Influence, and is reprinted here with permission. 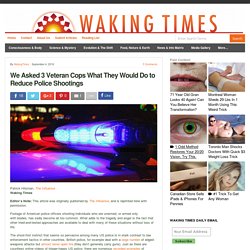 Footage of American police officers shooting individuals who are unarmed, or armed only with blades, has sadly become all too common. What adds to the tragedy and anger is the fact that other tried-and-tested approaches are available to deal with many of these situations without loss of life. The shoot-first instinct that seems so pervasive among many US police is in stark contrast to law enforcement tactics in other countries. British police, for example deal with a large number of edged-weapons attacks but almost never open fire (they don’t generally carry guns). In one 2014 incident, for example, Albuquerque police attempting to arrest a mentally ill man for “illegal camping” opened fire on him with assault weapons when he drew a tiny blade at a great distance from the heavily armed officers. Lt. Dr. About the Author. What's the Best Way to Weed Out Potential Killer Cops?

American Cops Now Being Sent to Scotland to Learn How to Stop Killing People. By Matt Agorist In all of 2011, British police killed 2 people. 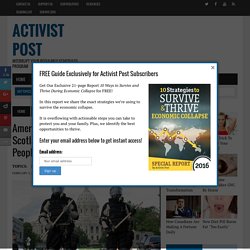 In 2012, 1 person. In 2013, a total of 3 bullets left the barrels of British police guns, and no one was killed. In the last two years, a total of 4 people have lost their lives because of British cops, bringing the total number of citizens killed in the UK to 7 in the last 5 years. Police Dept. Calls Out Big Pharma, Helps Drug Addicts Instead of Jailing.

Christina Sarich, Natural SocietyWaking Times Maybe this is really how to handle the ‘drug war’ The ‘drug war’ has been raging in America for decades, costing taxpayers millions, with no real change in the number of people addicted to drugs. 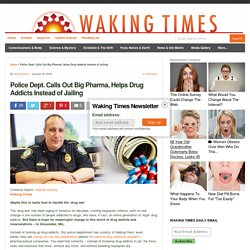 We have, in fact, an entire generation of ‘legal’ drug addicts. The Police: Our Enemies in Blue? Kristian Williams is not a big fan of the police. 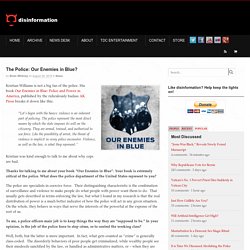 His book Our Enemies in Blue: Police and Power in America, published by the ridiculously badass AK Press breaks it down like this: “Let’s begin with the basics: violence is an inherent part of policing. The police represent the most direct means by which the state imposes its will on the citizenry. They are armed, trained, and authorized to use force. Like the possibility of arrest, the threat of violence is implicit in every police encounter. Campaign Zero. 2016candidatetrackingtools. Gov. Brown OKs nation's first ban on grand juries in police shootings. By Tracey Kaplan tkaplan@mercurynews.com Posted: 08/12/2015 08:03:27 AM PDT2 Comments|Updated: about 18 hours ago Gov. 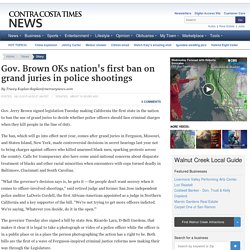 Reporting Police Abuse, Brutality, and Corruption. Police In Norway Haven’t Killed Anyone In Nearly A Decade. With police murdering people on a daily basis in the United States, it is interesting to see that police in other countries haven’t killed anyone in years. 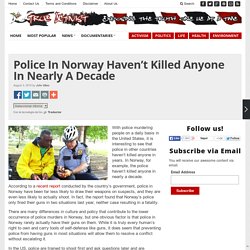 In Norway, for example, the police haven’t killed anyone in nearly a decade. I'm a black ex-cop, and this is the real truth about race and policing. On any given day, in any police department in the nation, 15 percent of officers will do the right thing no matter what is happening. 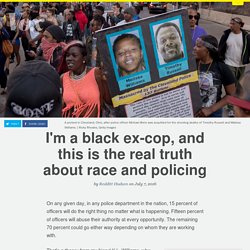 Fifteen percent of officers will abuse their authority at every opportunity. The remaining 70 percent could go either way depending on whom they are working with. That's a theory from my friend K.L. Williams, who has trained thousands of officers around the country in use of force. The Town Fighting Heroin Addiction With Compassion, Not Handcuffs. A renegade police chief has decided the War on Drugs just isn't working on his patch. 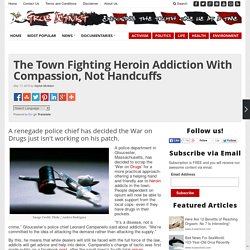 Image Credit: Flickr / Andres Rodriguez. What are my rights at various "checkpoints"? There are four general types of checkpoints you might encounter: DUI checkpoints, US border checkpoints, drug checkpoints, and TSA checkpoints. In a legal sense, they are not all created equal. So depending on which one you encounter, you’ll want to be prepared to flex your rights appropriately. DUI Checkpoints Sobriety checkpoints — also known as DUI checkpoints — are the most common roadblocks you might encounter. Legislation that Fines Cops $15,000 for Interfering with Citizens who Film Them, Passes House. Denver, CO — A recently proposed bill in Colorado imposing legal penalties on police officers who interfere with citizens filming them could soon become law. The state’s House Of Representatives passed the bill this week, and it will now move on to vote in the Senate.

If it becomes law, the bill would reportedly require police officers to have someone’s consent or a warrant to physically take or destroy a persons camera or footage. If an officer violates this law, the victim would then be able to seek damages up to $15,000 plus attorney fees. Supreme Court Rules Cops Cannot Detain You While Waiting on Drug Sniffing Dog. The Supreme Court has determined that it's unconstitutional for police to detain you without reasonable suspicion while waiting for a drug sniffing dog. Image Credit: WikiPedia Rodriguez v. Citizen Pulls Over Cop, Demands ID & It’s Amazing. 18. National Database of Police Killings Aims for Accountability – Top 25 Most Censored Stories of 2013-2014. Flynn to address task force on police shootings, custody deaths.

Milwaukee Police Chief Edward Flynn will add his voice to calls for a federal database of police shootings and custody deaths when he testifies Saturday before the President's Task Force on 21st Century Policing. He joins the ranks of Attorney General Eric Holder and FBI Director James Comey, who have said reliable data on the subject is needed. "Despite all the controversy in Ferguson, I don't know if they shoot one person a day or if that was the first shooting there," Flynn said Friday. And there is no national frame of reference to determine if a police department is below the norm, an outlier or about average when it comes to deadly use of force, he said. Without that data, "all we get are ideological thunderbolts," he added.

Flynn made similar remarks to Comey, who quoted him Thursday during a speech about race and policing that some have described as unprecedented. Texas Grand Jury Declines To Indict Pot Grower Who Shot And Killed A Cop During An Early-Morning Raid. Newsletter: We Will Not Back Down. This week we focus on the grim reality that government agencies and corporations work together to exploit people and planet and suppress dissent. This knowledge can be overwhelming at times to those who are striving for a more peaceful and just world, especially for those who are labeled as ‘terrorists’ by the ones who are violent.

In this work, our hearts are fortified by the love demonstrated in activist communities, by the growing number of communities who are standing up to the security state and corporate domination and by the tangible victories occurring each week. Undercover police officer entering Zucotti Park on the first day of Occupy Wall Street They seek to crush dissent because they are afraid In “Seven Lessons From How Police Crushed Occupy,” FOIA documents revealed the deep collaboration between federal agencies, even the military, and corporations prior to and during the ‘occupy phase’ of the movement for social, economic and environmental justice. Where will this stop? Four librarians gagged and threatened with prison time under the Patriot Act - Police State USA.

The Connecticut Four, from left to right: Janet Nocek, Peter Chase, George Christian, and Barbara Bailey. How to record police encounters without losing your video - Police State USA. Cops Worried After Citizens Engage in a New Form of Crowd-Funded, Direct Action Against Police State. Police Misconduct and Civil Rights - FindLaw. A step toward creating an impartial, comprehensive and searchable national database of people killed during interactions with law enforcement.

Why It’s Impossible to Indict a Cop. Are you aware of the Ziplock method for DUI checkpoints? Watch, learn, and be amazed. By Mike Sawyer | Free Thought Project CHIEFLAND, FL — In a video posted to YouTube this week, a novel and simply astonishing example of how to deal with DUI checkpoints, was illustrated by the guys from FairDUI.org. Get Our Help - The Solutions Institute. BREAKING: “Doors Stormed” Ferguson Protesters have Occupied the STL Police Department. “We are informing you that the police department is scheduled to be reclaimed by its citizens today” Ferguson, MO — Protesters have occupied the police station in St Louis demanding that the “occupiers of the St. Fed Up: Florida Crowd Forms Human Shield to Protect Man Police Try to Arrest for Smoking Marijuana.