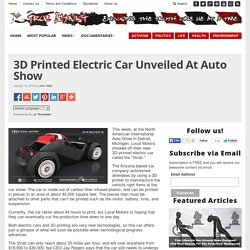 The Arizona-based car company astonished attendees by using a 3D printer to manufacture the vehicle right there at the car show. The car is made out of carbon fiber infused plastic, and can be printed in pieces in an area of about 40,000 square feet. The pieces then must be attached to other parts that can’t be printed such as the motor, battery, tires, and suspension. Currently, the car takes about 44 hours to print, but Local Motors is hoping that they can eventually cut the production time down to one day.

Both electric cars and 3D printing are very new technologies, so this car offers just a glimpse of what will soon be possible when technological progress advances. John Vibes writes for True Activist and is an author, researcher and investigative journalist who takes a special interest in the counter culture and the drug war. Shapeways - Customize and create 3D printed products. Welcome to the Future of Stuff. HP Reveals New, Ultra-Fast 3D-Printing System. HP today announced Multi Jet Fusion, a new 3D-printing technology that, according to the company, can print objects in 3D at much faster speeds and lower costs than existing methods. 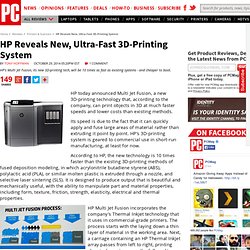 Its speed is due to the fact that it can quickly apply and fuse large areas of material rather than extruding it point by point. HP's 3D-printing system is geared to commercial use in short-run manufacturing, at least for now. Projects. NIH launches 3D print exchange. NIH launches 3D print exchange By GCN StaffJun 23, 2014 The National Institutes of Health has launched a 3D Print Exchange, a public website that lets users share, download and edit biomedical 3D print files that can be used to print custom laboratory equipment and models of bacteria and human anatomy in 3D, the NIH said in its announcement. 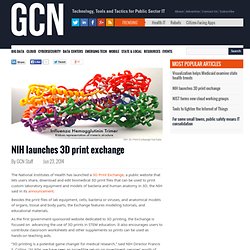 Besides the print files of lab equipment, cells, bacteria or viruses, and anatomical models of organs, tissue and body parts, the Exchange features modeling tutorials, and educational materials. As the first government-sponsored website dedicated to 3D printing, the Exchange is focused on advancing the use of 3D prints in STEM education. It also encourages users to contribute classroom worksheets and other supplements so prints can be used as hands-on teaching aids. 3D printing will explode in 2014, thanks to the expiration of key patents - Quartz. Here’s what’s holding back 3D printing, the technology that’s supposed to revolutionize manufacturing and countless other industries: patents. 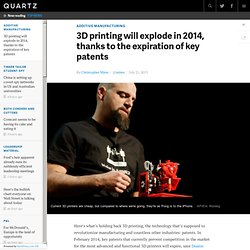 In February 2014, key patents that currently prevent competition in the market for the most advanced and functional 3D printers will expire, says Duann Scott, design evangelist at 3D printing company Shapeways. These patents cover a technology known as “laser sintering,” the lowest-cost 3D printing technology. Because of its high resolution in all three dimensions, laser sintering can produce goods that can be sold as finished products.

3-D Printed Car Is as Strong as Steel, Half the Weight, and Nearing Production. Engineer Jim Kor and his design for the Urbee 2. 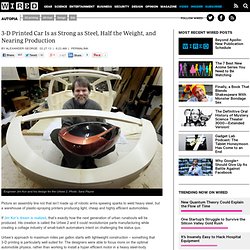 Photo: Sara Payne Picture an assembly line not that isn’t made up of robotic arms spewing sparks to weld heavy steel, but a warehouse of plastic-spraying printers producing light, cheap and highly efficient automobiles. If Jim Kor’s dream is realized, that’s exactly how the next generation of urban runabouts will be produced. His creation is called the Urbee 2 and it could revolutionize parts manufacturing while creating a cottage industry of small-batch automakers intent on challenging the status quo. 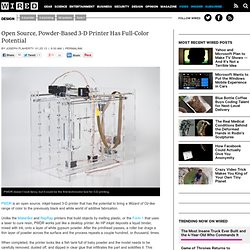 PWDR is an open source, inkjet-based 3-D printer that has the potential to bring a Wizard of Oz-like range of color to the previously black and white world of additive fabrication. Unlike the MakerBot and RepRap printers that build objects by melting plastic, or the Form 1 that uses a laser to cure resin, PWDR works just like a desktop printer. An HP inkjet deposits a liquid binder, mixed with ink, onto a layer of white gypsum powder. After the printhead passes, a roller bar drags a thin layer of powder across the surface and the process repeats a couple hundred, or thousand, times.

When completed, the printer looks like a fish tank full of baby powder and the model needs to be carefully removed, dusted off, and dipped in clear glue that infiltrates the part and solidifies it. PWDR was developed by Alex Budding, a mechanical engineering student at the University of Twente in Singapore. CUBIT. 3D printers: 10 machines for home manufacturing.