All concepts. . . Youtube videos are fakes. . . But still i believe the magnetic energy can be harnessed somehow. . . From the works of nikola tesla to the present world of quantum mechanics. . . 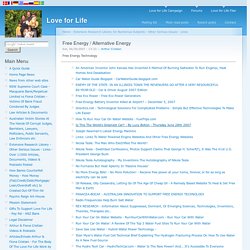 When we live for the dreams of Kindom of those around us, we live life as a gift because we live for (dedicate our lives to) their dream of freedom, truth, peace, joy, abundance, etc, just as they live for our Kindom dreams too. This is true co-creation (cooperation) with no attack on the uniqueness of each of us. When we live this way, we have no need for any man-made system - everything/everyone has already been taken care of by our love for life. Just as we do not have to jump 10 feet across the room to grab our next breath, neither do we have to worry about food, water and shelter because it has all been taken care of as we each co-create Kindoms/Kin-Domains for everyone. From Bare Dirt To Abundance Part Two A 5th November Sequential Order. Free Energy – healing our fears and the path to creativity. Free Energy – healing our fears and the path to creativity I’ve been thinking about the nature of creativity, and what becomes obsolete when people start to have more power to create for themselves. 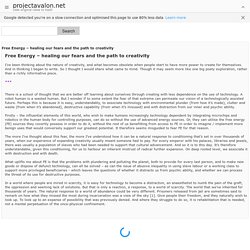 And in thinking I began to write. So I thought I would share what came to mind. Though it may seem more like one big poety exploration, rather than a richly informative piece. ***There is a school of thought that we are better off learning about ourselves through creating with less dependence on the use of technology. Pump Water Without Electricity. 13-Year-Old Invents Tesla Inspired Free Energy Device for Under $15. Terence Newton, StaffWaking Times Inspired by the geniuses Nikola Tesla and Albert Einstein, teenager Max Loughan loves to invent things, in fact, he says he has known his entire short life that his purpose was to change the world with his inventions. 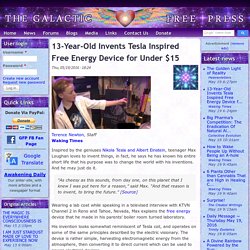 And he may just do it. “As cheesy as this sounds, from day one, on this planet that I knew I was put here for a reason,” said Max. “And that reason is to invent, to bring the future.” [Source] Wearing a lab coat while speaking in a televised interview with KTVN Channel 2 in Reno and Tahoe, Nevada, Max explains the free energy device that he made in his parents’ boiler room turned laboratory.

His invention looks somewhat reminiscent of Tesla coil, and operates on some of the same principles described by the electric visionary. What’s even more incredible is that Max built his free energy device out of materials he purchased for less than $15. “He created an electro magnetic harvester out of a coffee can, some wire, two coils, and a spoon.” 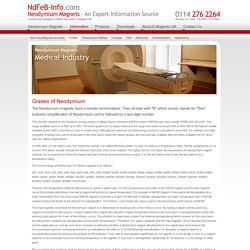 The range available used to be N24 up to N52. The lower grades are no longer made and the range now starts at around N30 or N33. N50 is the highest readily available grade. Buy Magnets Online. Searching for free energy and discussing free energy. Free Energy Generator for 220V light bulb!! "Free Energy" magnet coil Generator by Wasaby Sajado. 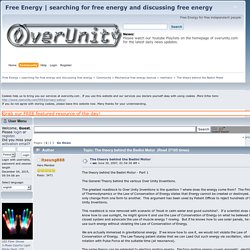 The participants included Lee Cheung Kin, Lawrence Tseung, Wang Shum Ho, Peter Chan, Forever Yuen and Sun Fok Kun. Reporter: "I have read the theory and seen the demonstrations. The most impressive and conclusive demonstration to me is the disassembly and reassembly of the Wang device. The moment it rotated after reassembly, I became a total convert. I would like to report this importent event for the World. " Forever: "How about my experiments using magnetic pendulums? Reporter: "That was pure mathematics. Wang smiled: "It took me over 40 years to produce the machine. Lee: "Without your machine rotating in front of the Officials on January 15, 2007, you will not be a vice president of a RMB$13 billion Company today.

Bedini SG - The Complete Handbook Series for the Bedini SG & Bedini SSG. Bedini SSG free energy motor runs on the Polarity Principle. The search for the existence of the Dynamic Ether has resulted in new mechanical devices that astound. 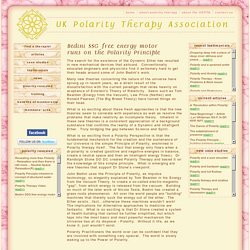 Conventionally educated engineers and physicists find it extremely hard to get their heads around some of John Bedini's work. Many new theories concerning the nature of the universe have sprung up in recent years, as a direct result of the dissatisfaction with the current paradigm that relies heavily on aceptance of Einstein's Theory of Relativity. Seers such as Tom Bearden (Energy from the Vacuum), Lew Price (Nether) and Ronald Pearson (The Big Breed Theory) have turned things on their head.

What is so exciting about these fresh approaches is that the new theories seem to correlate with experience as well as resolve the problems that make relativity an incomplete theory.