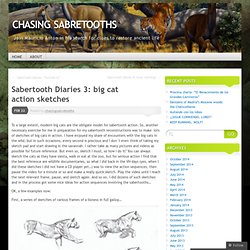 So, another necessary exercise for me in preparation for my sabertooth reconstructions was to make lots of sketches of big cats in action. I have enjoyed my share of encounters with the big cats in the wild, but in such occasions, every second is precious and I don´t even think of taking my sketch pad and start drawing in the savannah. I rather take as many pictures and videos as possible for future reference. But even so, sketch I must, so how I do it? You can always sketch the cats as they have siesta, walk or eat at the zoo, but for serious action I find that the best reference are wildlife documentaries, so what I did back in the VH days (yes, when I did these sketches I did not have a CD player yet…) was to view the action sequences, then pause the video for a minute or so and make a really quick sketch.

Sabertooth diaries 1: excavating old sketches. As the publication of my book “Sabertooth” comes closer, I am trying to put some order in the mass of material I have been working with during the last few years. 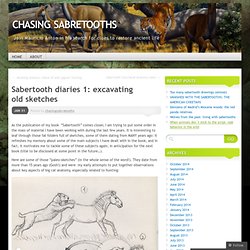 It is interesting to leaf through those fat folders full of sketches, some of them dating from MANY years ago: it refreshes my memory about some of the main subjects I have dealt with in the book, and in fact, it motivates me to tackle some of these subjects again, in anticipation for the next book (title to be disclosed at some point in the future…). Here are some of those “paleo-sketches” (in the whole sense of the word!). 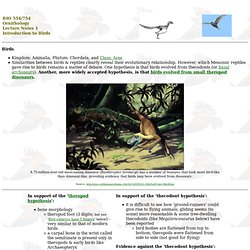 However, which Mesozoic reptiles gave rise to birds remains a matter of debate. One hypothesis is that birds evolved from thecodonts (or basal archosaurs). Terryl Whitlatch, Creature Designer. How to Draw Animals: Dogs and Wolves, and Their Anatomy. A dog is a man's best friend. 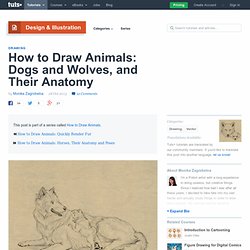 They come in every size and shape, so everyone can find their favorite breed. If you want to learn what dogs are made of and how to draw them, and also their ancestor, the wolf - check out this tutorial! To create a believable pose, you need to understand the skeletal structure of a dog first. The problem is there are so many breeds of dog, and they differ a lot. We can solve it by going back to the past, to their common ancestor - the wolf. We can now break the complicated skeleton into something more simple and easier to remember. Once we've got the structure, we can create any breed from it. Masao Kinoshita. Eagle_anatomy.jpg (JPEG Image, 1600 × 1035 pixels) - Scaled (64%) Muscle Creator v1.1. Life - Episode 02: Reptiles and Amphibians - Watch Free Documentary Online - BBC, Martha Holmes, Rupert Barrington, David Attenborough (narrator) Description In the opening sequence, an aerial camera zooms in on a solitary Komodo dragon from afar. 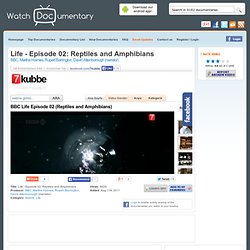 This, states Attenborough, is the last place on Earth still ruled by reptiles. Though they may seem primitive, reptiles and amphibians still thrive thanks to diverse survival strategies. In Venezuela, a pebble toad evades a tarantula by free-falling down a steep rock face. The basilisk, nicknamed the Jesus Christ lizard, can literally run on water and the Brazilian pygmy gecko is so light it does not break the surface. Tags. PBS Nova Lizard Kings part 1. Dragons Alive Ruling Reptiles part 1. Reptiles and Amphibians DVD Exclusive. Reptiles & Amphibians (National Geographic Nature Library): Catherine Herbert Howell: 9780870448911: Amazon.com Children's Books. Dragon-by-brynnmetheney (Obrazek JPEG, 800×709 pikseli) Detail of lizard scales. Tropical Herping. If you are reading this book, you have been attracted at least once by the wonders of amphibians and reptiles. 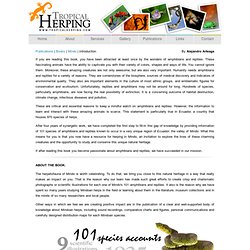 These fascinating animals have the ability to captivate you with their variety of colors, shapes and ways of life. You cannot ignore them. Moreover, these amazing creatures are not only awesome, but are also very important. Humanity needs amphibians and reptiles for a variety of reasons. ZooPax: A Matter of Scale: Part I. PubMed Central, Fig. 3: Int J Dev Biol. 2009; 53(5-6): 813–826. doi:  10.1387/ijdb.072556cc. "Animal Anatomy" with Jonathan Kuo~!! Hi Everyone, There is currently no spot remaining for "Animal Anatomy" with Jonathan Kuo. 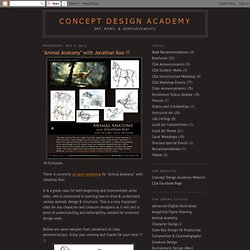 The secret of the turtle shell. Turtle morphology poses a unique puzzle in that the turtle's scapulae (shoulder blades), situated outside the ribs in other animals, are found inside its shell (which is formed from the bones equivalent to ribs in other species). 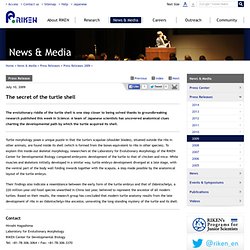 To explain this inside-out skeletal morphology, researchers at the Laboratory for Evolutionary Morphology of the RIKEN Center for Developmental Biology compared embryonic development of the turtle to that of chicken and mice. While muscles and skeletons initially developed in a similar way, turtle embryo development diverged at a late stage, with the ventral part of the body wall folding inwards together with the scapula, a step made possible by the anatomical layout of the turtle embryo. Their findings also indicate a resemblance between the early form of the turtle embryo and that of Odontochelys, a 220 million-year-old fossil species unearthed in China last year, believed to represent the ancestor of all modern turtles. Contact. Quadrupeds - Action Analysis. Synapsid_evolution.jpg (Obrazek JPEG, 1193x1569 pikseli) - Skala (44%) Abstract. Procedural Muscle and Skin Simulation Zachary Gray – Michael Hutchinson This paper presents a method and workflow for developing anatomy based character animation. 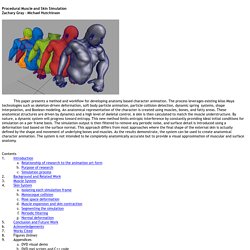 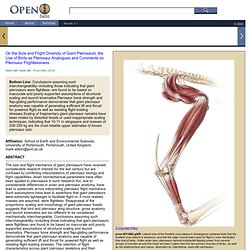 Unlike avian taxa, pterosaurs derived substantial flapping power from several groups of muscles around the chest and back (rather than the two primary muscles in birds), as well as the antebrachium and manus. Illustration by Julia Molnar, used with permission. Mentions: Along with being incredibly strong, the morphology of pterosaur bones also advocates a flighted lifestyle (Figs. 1, 3–4). Most obviously, all pterosaurs bear hypertrophied fourth manual digits that supported a thin but complex membrane in life [60]–[62], forming a very obvious wing. Italian Greyhound running in UltraSlo motion Same dog Close. Whippets Running Slowly. Kids at the beach! Join Mauricio Antón in his search for clues to restore ancient life. How to Train your Dragon. Книга Animals Real and Imagined: Fantasy of What Is and What Might Be. Animals Real and Imagined. Alphabeastiary. MIĘŚNIE GŁOWY. Birds - Bird Skull Collection. Animal Anatomy. Go into your big-city bookstores or search Amazon and you'll find lots of books on how to draw animals, most of which teach you technique and “tricks” to give your drawing some flash, but neglect the great tradition of classic animal drawing that allows artists to invent from imagination.