Mind the Gap – Ian Thomas. 18 Dec I wanted to set down some thoughts on writing for interactivity and the concept of leaving gaps in your writing. 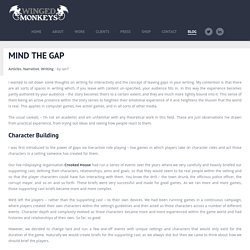 My contention is that there are all sorts of spaces in writing which, if you leave with content un-specified, your audience fills in. What Civ VI Could Learn From Civilization: Call To Power. I’m not entirely sure what’s going on. 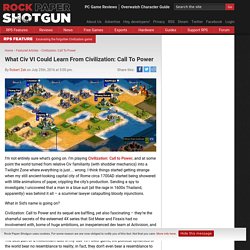 I’m playing Civilization: Call to Power, and at some point the world turned from relative Civ familiarity (with shoddier mechanics) into a Twilight Zone where everything is just… wrong. I think things started getting strange when my still ancient-looking capital city of Rome circa 1700AD started being showered with little animations of paper, crippling the city’s production. Sending a spy to investigate, I uncovered that a man in a blue suit (all the rage in 1600s Thailand, apparently) was behind it all – a scummer lawyer catapulting bloody injunctions. Why Shovel Knight is great and Mighty No. 9 is terrible. Many "classic" games are terrible, at least when looked at through the lens of modern gaming. 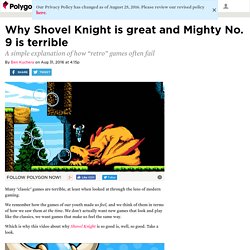 We remember how the games of our youth made us feel, and we think of them in terms of how we saw them at the time. We don’t actually want new games that look and play like the classics, we want games that make us feel the same way. Kill Box is a troubling game about drone warfare. Playing as a child, I roam the outskirts of my village, skipping near my relatives working in the fields, past cows in their pastures, beneath the shade of an ancient wall. 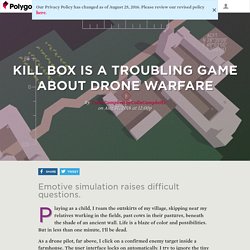 Life is a blaze of color and possibilities. But in less than one minute, I'll be dead. How Life is Strange just might save lives — in-game and in real life. Life is Strange at first seems like a typical choice-based, episodic adventure game — albeit with the twists of teen protagonists and a special supernatural ability. 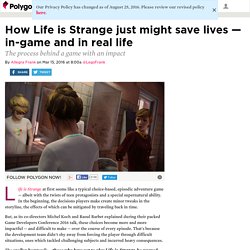 In the beginning, the decisions players make create minor tweaks in the storyline, the effects of which can be mitigated by traveling back in time. But, as its co-directors Michel Koch and Raoul Barbet explained during their packed Game Developers Conference 2016 talk, these choices become more and more impactful — and difficult to make — over the course of every episode. That's because the development team didn't shy away from forcing the player through difficult situations, ones which tackled challenging subjects and incurred heavy consequences. The spoiler-heavy talk — those who have yet to play Life is Strange, be warned before reading further — featured the co-directors detailing their process in crafting situations which would have lasting effects on both lead character Max and the player who controls her. Anyone else could have saved her: Life is Strange gave my personal tragedy a score.

This article contains frank descriptions of suicide, as well as spoilers for Life is Strange. 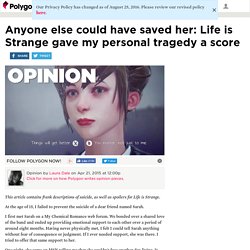 At the age of 15, I failed to prevent the suicide of a dear friend named Sarah. I first met Sarah on a My Chemical Romance web forum. We bonded over a shared love of the band and ended up providing emotional support to each other over a period of around eight months. Dolorès H.M.S. Dolores. When Cards Go Bad. In the first month of MagicTheGathering.com, I received numerous emails from many of you readers. 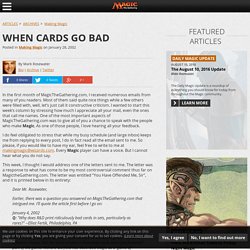 Most of them said quite nice things while a few others were filled with, well, let’s just call it constructive criticism. I wanted to start this week’s column by stressing how much I appreciate all your mail, even the ones that call me names. One of the most important aspects of MagicTheGathering.com was to give all of you a chance to speak with the people who make Magic. As one of those people, I love hearing all your feedback. Dolorès H.M.S. Dolores. Touring the living remains of an 11-year-old MMO. Non, les jeux vidéo ne forment pas des djihadistes, mais... Le Monde.fr | • Mis à jour le | Par William Audureau Avertissement : cet article contient de nombreux spoilers. 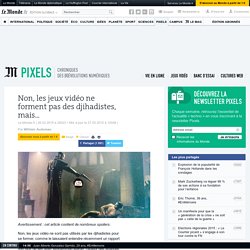 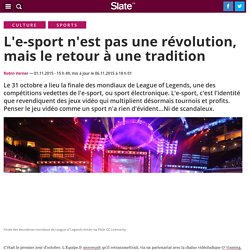 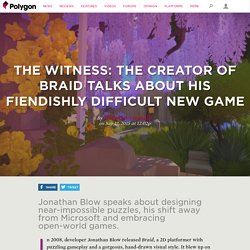 In 2008, developer Jonathan Blow released Braid, a 2D platformer with puzzling gameplay and a gorgeous, hand-drawn visual style. It blew up on Xbox Live Arcade and became one of the main titles people pointed at as part of the "indie game" revolution. One year later, in 2009, he announced his follow-up, an adventure puzzle game called The Witness. "I thought it was going to be a much smaller game at the time, so when I announced it, I said ‘coming Christmas 2011,'" Blow recalls, laughing. "Of course, the reaction on the internet was, ‘Oh my god, that's so far in the future. My joyless time with the digital sherpas of Destiny. "Go stand behind that rock. When you can, pop out and hit him with your heavy weapon. " These were easy instructions to follow, and the other person on my Destiny fireteam knew what he was talking about. He had run this strike multiple times, and was nice enough to teach me the ropes. I was taking part in a battle that had been fought hundreds of thousands of times by other players, and every moment of the battle was well-known.

I walked over piles of virtual and invisible bullet shells. How to be a selfish bastard, and other lessons learned from a night of Super Mario Maker. Who hasn't dreamed about making their own levels in a Mario game? Super Mario Maker is a bit of an answered prayer for every kid who grew up with graphing paper and a dream, and I've been able to spend a few days, and one intense night, with the game. Here's what I've learned.

It's OK to be a selfish bastard This is kind of counterintuitive, but Nintendo has spent so much of the PR cycle for Mario Maker talking about the ability to make your own levels that people may not realize that aspect of the game can be ignored completely. The Last Guardian's incredible eight-year journey to the PlayStation 4. The return of The Last Guardian served as a crowd-pleasing kickoff to Sony's E3 2015 press briefing Monday night. It was a memorable moment for all involved, especially the man who followed up the reveal on stage. "I couldn't believe I was there," said Shuhei Yoshida, president of Sony Computer Entertainment Worldwide Studios, in an interview with Polygon at E3. Yoshida had been waiting backstage with The Last Guardian creative director Fumito Ueda — "we hid Ueda-san before the show," Yoshida explained, to keep the announcement secret until the big moment — and came out to raucous cheers from the crowd after the trailer.

Jeux vidéo. Eve Online, le plus démocratique des mondes virtuels. Every last bottle cap: How my OCD turned collectibles from distraction to obsession. An estimated 3.3 million people in the United States have obsessive-compulsive disorder, approximately 2.3 percent of the population. Over 100 million people in the U.S. are gamers, a number that only grows each year as new platforms and increasingly accessible technology emerge. I sit in the overlap between those two worlds. I am a female gamer living with OCD. I grew up unaware that my behavior was different from other people's, which can be common in people with OCD. I developed neurological issues early on in childhood, but lacked an environment with proper parental supervision, so the behavioral "quirks" typifying my condition largely went unnoticed.

The curiously ordinary desire of Tim Schafer. One of the world's most successful game developers is missing something: a really big hit. Sonoma Valley High School senior Tim is strolling the corridors between classes. It's 1984. He's wearing a Toshiro Mifune T-shirt and jeans. Anyone else could have saved her: Life is Strange gave my personal tragedy a score. Video games don't want to be movies, they want to be steak.

Video games and movies are often compared to each other in derisive ways. Some video games, like the recently released PlayStation 4 game The Order: 1886, are criticized for being too much like a movie. That game was knocked for its supposedly short length and reliance on cinematic storytelling and QTEs over skill-based gameplay. Movies are often described as "video game-like" when a critic wants to describe something that's full of gunfire, high speed violence or hyperactive special effects. Comparing a movie to a video game is a vicious takedown. But some video games intentionally strive to be more cinematic, often to their detriment. What it's like to play Pokémon Blue 20 years late (and kind of lose your mind)

Grand Theft Auto is dangerous again. First-person games have become boring. Bizarre gaming peripheral seeks $250K from Kickstarter to bleed you out in real life. Mass Effect studio helps couple get engaged. StoryShift is a new storytelling medium. Why hasn’t it caught on? 1980 D&D ad asserts that RPGs are woman-friendly. Why Alien Isolation deserves to be as influential as the movies.