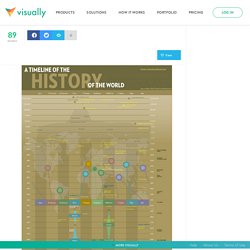 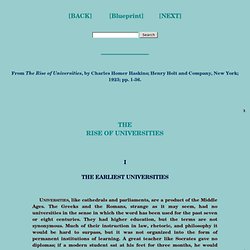 UNIVERSITIES, like cathedrals and parliaments, are a product of the Middle Ages. The Greeks and the Romans, strange as it may seem, had no universities in the sense in which the word has been used for the past seven or eight centuries. They had higher education, but the terms are not synonymous. Much of their instruction in law, rhetoric, and philosophy it would be hard to surpass, but it was not organized into the form of permanent institutions of learning. A great teacher like Socrates gave no diplomas; if a modern student sat at his feet for three months, he would demand a certificate, 4 something tangible and eternal to show for it — an excellent theme, by the way, for a Socratic dialogue.

The contrast between these earliest universities and those of today is of course broad and striking. While the word university does not appear in these documents, it is taken for granted. So I Won't Forget My Favorite Poems: Zbigniew Herbert, "At the Gate of the Valley" A Sociology of Steve Jobs. Steve Jobs had charisma. 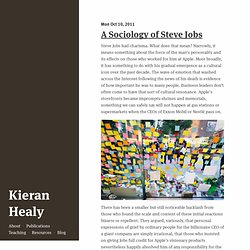 What does that mean? Narrowly, it means something about the force of the man’s personality and its effects on those who worked for him at Apple. More broadly, it has something to do with his gradual emergence as a cultural icon over the past decade. The wave of emotion that washed across the Internet following the news of his death is evidence of how important he was to many people. Business leaders don’t often come to have that sort of cultural resonance. There has been a smaller but still noticeable backlash from those who found the scale and content of these initial reactions bizarre or repellent. Whichever way you see it, there is clearly more at work here than measured assessments of someone who excelled in maximizing shareholder value. Charismatic Authority Writing in the early part of the twentieth century, Max Weber wondered why people followed the wishes and demands of others in the absence of direct coercion. Talk to Me: Design and the Communication Between People and Objects.

By Maria Popova The ever-expanding definition and cultural role of design in the age of sensors, data, and responsive interfaces. 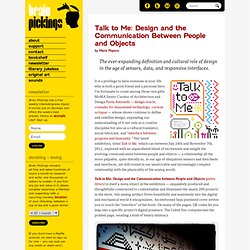 It is a privilege to have someone in your life who is both a good friend and a personal hero. I’m fortunate to count among those rare gifts MoMA Senior Curator of Architecture and Design Paola Antonelli — design oracle, crusader for humanized technology, curious octopus — whose shows continue to define and redefine design, expanding our understanding of it not only as a creative discipline but also as a cultural translator, social lubricant, and “interface between progress and humanity.”

Talk to Me: Design and the Communication between People and Objects (public library) is itself a meta-object in the exhibition — exquisitely produced and thoughtfully constructed to contextualize and illuminate the nearly 200 projects in the show, this analog artifact flows beautifully and seamlessly into the digital and mechanical world it encapsulates. 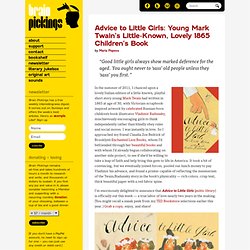 You ought never to ‘sass’ old people unless they ‘sass’ you first.” In the summer of 2011, I chanced upon a lovely Italian edition of a little-known, playful short story young Mark Twain had written in 1865 at age of 30, with Victorian-scrapbook-inspired artwork by celebrated Russian-born children’s book illustrator Vladimir Radunsky, mischievously encouraging girls to think independently rather than blindly obey rules and social mores. I was instantly in love. So I approached my friend Claudia Zoe Bedrick of Brooklyn’s Enchanted Lion Books, whom I’d befriended through her beautiful books and with whom I’d already begun collaborating on another side project, to see if she’d be willing to take a leap of faith and help bring this gem to life in America.