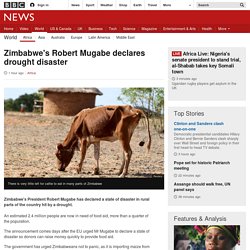 An estimated 2.4 million people are now in need of food aid, more than a quarter of the population. The announcement comes days after the EU urged Mr Mugabe to declare a state of disaster so donors can raise money quickly to provide food aid. The government has urged Zimbabweans not to panic, as it is importing maize from neighbouring Zambia. The United Nations World Food Programme has said some 14 million people face hunger in southern Africa because of a drought that has been exacerbated by the El Nino weather phenomenon. South Africa, Namibia and Botswana have also been badly hit. Africa Live: BBC News updates The country has been experiencing abnormally low rainfall since last year, leading to the deaths of thousands of cattle whose grazing areas have become parched. LiveTextViewer. China's one-child policy ends. 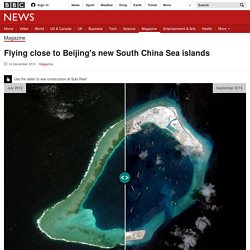 A few days ago he returned to the area in a small aircraft - provoking a furious and threatening response from the Chinese Navy. The scattered atolls, reefs and sand bars known as the Spratly Islands are a very difficult place to get to. Don't expect an invitation from Beijing. After months of planning and negotiation, I was sitting in a hotel room in Manila packed and ready to go when the phone rang. "Our permission to land on Pagasa has been revoked! " My heart sank. In fact it was worse. Next came a call from my editor in London. "The Chinese embassy has been on the phone. I mentally kicked myself. Jiro and I looked at each other. An Uber for dirty laundry - and other apps changing Uganda - BBC ... Like much of Africa, Uganda has a vibrant technology and start-up scene. 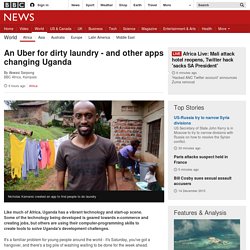 Some of the technology being developed is geared towards e-commerce and creating jobs, but others are using their computer-programming skills to create tools to solve Uganda's development challenges. Flying close to Beijing's new South China Sea islands. LiveTextViewer. Can India compete with China in Africa? India embraces Africa's leaders at summit in New Delhi. Google services set for 'return' to China. Image copyright Reuters Google is planning to expand its presence in China, Eric Schmidt, chairman of the search giant's holding company, has said. 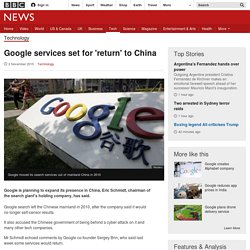 Google search left the Chinese mainland in 2010, after the company said it would no longer self-censor results. It also accused the Chinese government of being behind a cyber-attack on it and many other tech companies. Mr Schmidt echoed comments by Google co-founder Sergey Brin, who said last week some services would return. During a speech at the Tech Crunch Beijing conference, Mr Schmidt said Google had a lot of partners in China and was in regular contact with the country's government about its presence and services. "The interesting thing is that Google never left China," he said. Its presence in the country helped it maintain contact with Chinese companies keen to advertise on Google's services outside the country, Mr Schmidt said. He did not provide details of what Google planned to expand or launch on the Chinese mainland. Kenya and Ethiopia sign cross-border agreement. How mobile tech is improving global disaster relief.

Image copyright Getty Images When war or natural disaster causes havoc around the world and millions of people are displaced or rendered homeless, communications and power infrastructures are often damaged or non-existent. 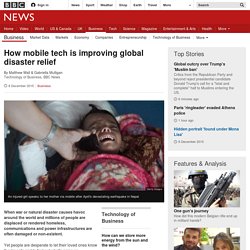 Yet people are desperate to let their loved ones know they're safe and to find out what's going on. "The first questions people always ask when they arrive at a refugee camp are 'Where can I charge my phone? ' and 'Is there wi-fi? '," says John Warnes, innovation specialist at the UN High Commissioner for Refugees (UNHCR). "These often seem to be more important to people than food and water. " Administering food, shelter and medical aid is made even harder for aid agencies and non-governmental organisations (NGOs) without proper communications. 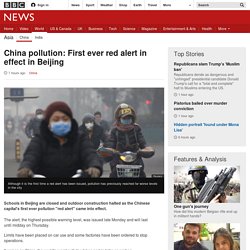 The alert, the highest possible warning level, was issued late Monday and will last until midday on Thursday. Limits have been placed on car use and some factories have been ordered to stop operations. It comes as China, the world's worst polluter, takes part in talks on carbon emissions in Paris. It is the first time China has declared a red alert under the four-tier alert system, which was adopted a little over two years ago, although pollution levels were far from the city's worst. At 07:00 local time on Tuesday (23:00 GMT on Monday), when the alert came into effect, the US Embassy's air pollution monitor in Beijing reported that the intensity of the tiny particles known as PM 2.5 was at 291 micrograms per cubic metre. By 11:00 it had dropped very slightly to 250 - still a level it described as "very unhealthy".

China pledges $60bn to develop Africa. Image copyright AFP China has announced $60bn (£40bn) of assistance and loans for Africa to help with the development of the continent. 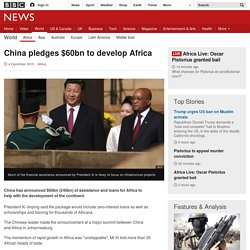 President Xi Jinping said the package would include zero-interest loans as well as scholarships and training for thousands of Africans. The Chinese leader made the announcement at a major summit between China and Africa in Johannesburg. The momentum of rapid growth in Africa was "unstoppable", Mr Xi told more than 35 African heads of state.