Cyclone Nisarga: Rare storm in decades pounds India's west coast. Cyclone Nisarga, which intensified into a severe cyclonic storm in the Arabian Sea, is making landfall along India's western coast, forcing a high alert in the financial hub of Mumbai and evacuation of tens of thousands of people. 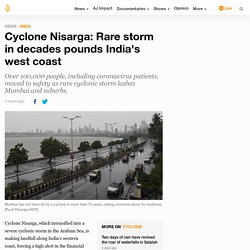 "[The] landfall process started and it will be completed during the next three hours. The northeast sector of the eye of the severe cyclonic storm Nisarga is entering into the land," India's meteorological department said on Wednesday. More: Mumbai coronavirus cases spike as India begins to ease lockdownCyclone Amphan kills dozens, destroys homes in India, BangladeshLandslides kill at least 20 in India's Assam state Nisarga dropped heavy rains and winds gusting up to 120km (75 miles) per hour as a category 4 cyclone near the coastal city of Alibagh, about 98km (60 miles) south of Mumbai, the capital of Maharashtra state and home to more than 18 million people.

Media reports said Nisarga is the worst cyclone to hit the region in more than 70 years [Al Jazeera] Central Railways leases its land to employees for growing vegetables in Mumbai : OFFTRACK. Imam Ali Shaikh, 45, comes in to supervise his vegetable farm at 9 a.m. every Saturday. 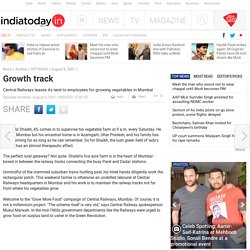 He lives in Mumbai but his ancestral home is in Azamgarh, Uttar Pradesh, and his family has been farming for as long as he can remember. So for Shaikh, the lush green field of lady's fingers has an almost therapeutic effect. The perfect rural getaway? Not quite. Shaikh's five acre farm is in the heart of Mumbai - boxed in between the railway tracks connecting the busy Parel and Dadar stations.

Unmindful of the crammed suburban trains hurtling past, his hired hands diligently work the rectangular patch. Welcome to the "Grow More Food" campaign of Central Railways, Mumbai. The revolution did indeed happen and the schemes were then forgotten. Until last year, trains on the world's largest suburban rail network crawled at a snail's pace and within scraping distance of nearly 14,500 hutments crowded into the vital 10-m safety zone sandwiched between the tracks. 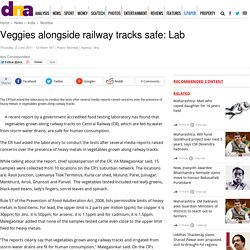 A recent report by a government accredited food testing laboratory has found that vegetables grown along railway tracks on Central Railway (CR), which are fed by water from storm water drains, are safe for human consumption. While talking about the report, chief spokesperson of the CR, VA Malegaonkar said, 15 samples were collected from 10 locations on the CR’s suburban network. Antilla – The $1 Billion SUPER Home In Mumbai, India. Location: Altamount Rd Mumbai, MH, India Square Footage: 400,000 Value: $1,000,000,000 If you haven’t heard of this home already, then you MUST be living in a hole. 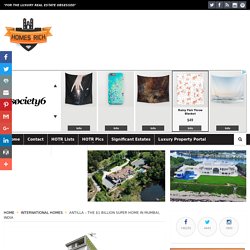 Dubbed “Antilla”, this massive 27-story home is located in Mumbai, India. Billed as the most expensive home ever built, with a value of $1 billion, the lavish residence was built for billionaire Mukesh Ambani. Antila was designed by Chicago based architects, Perkins & Will. The 570 foot tall monster of a “house” features a whopping 400,000 square feet of living space. Where the walls come alive: Graffiti in Bandra, Mumbai.

Just off bustling Hill Road in Bandra, there are roads that lead you deep into an East Indian village. 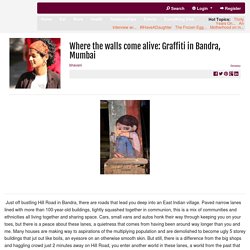 Paved narrow lanes lined with more than 100-year-old buildings, tightly squashed together in communion, this is a mix of communities and ethnicities all living together and sharing space. Cars, small vans and autos honk their way through keeping you on your toes, but there is a peace about these lanes, a quietness that comes from having been around way longer than you and me. Many houses are making way to aspirations of the multiplying population and are demolished to become ugly 5 storey buildings that jut out like boils, an eyesore on an otherwise smooth skin.

But still, there is a difference from the big shops and haggling crowd just 2 minutes away on Hill Road, you enter another world in these lanes, a world from the past that you can still savour, maybe for just a little bit longer. Most appealing is a snack shop that is covered with a tribute or rather an ‘un’tribute to momos! The Ugly Indian. Mumbai - case study of a megacity.