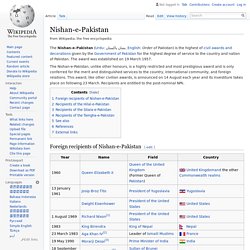 The award was established on 19 March 1957. The Nishan-e-Pakistan, unlike other honours, is a highly restricted and most prestigious award and is only conferred for the merit and distinguished services to the country, international community, and foreign relations. This award, like other civilian awards, is announced on 14 August each year and its investiture takes place on following 23 March. Recipients are entitled to the post-nominal NPk. Andorra. Not to be confused with Andora. 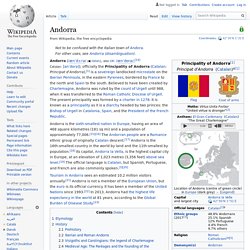 Coordinates: Andorra ( i/ænˈdɔːrə/; Catalan: [ənˈdorə], locally: [anˈdɔra]), officially the Principality of Andorra (Catalan: Principat d'Andorra), also called the Principality of the Valleys of Andorra[5] (Catalan: Principat de les Valls d'Andorra), is a sovereign landlocked microstate in Southwestern Europe, located in the eastern Pyrenees mountains and bordered by Spain and France. Created under a charter in 988, the present principality was formed in 1278. It is known as a principality as it is a monarchy headed by two Co-Princes – the Roman Catholic Bishop of Urgell in Spain, and the President of France. Andorra's tourism services an estimated 10.2 million visitors annually.[8] It is not a member of the European Union, but the euro is the official currency.

Etymology[edit] Another theory suggests that Andorra may derive from Arabic al-durra, meaning "The pearl" (الدرة). History[edit] Sant Joan de Caselles church, dating from the 11th century Politics[edit] Twenty One Pilots. History 2009–11: Formation and Twenty One Pilots The band was formed in 2009 in Columbus, Ohio by college friends, Tyler Joseph, Nick Thomas and Chris Salih.[11][13] Tyler came up with the band's name while studying All My Sons by Arthur Miller, a play about a man who must decide what is best for his family after causing the death of 21 pilots during World War II because he knowingly sent them faulty parts for the good of his business. 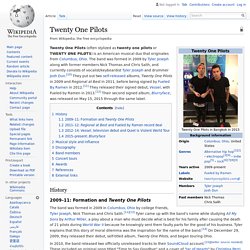 Tyler explains that this story of moral dilemma was the inspiration for the name of the band.[14] On December 29, 2009, they released their debut, self-titled album, Twenty One Pilots, and began touring Ohio. In 2010, the band released two officially unreleased tracks to their SoundCloud account.[15][better source needed] These included an original song titled "Time to Say Goodbye" and a cover of "Jar of Hearts" by Christina Perri. They were originally available for free download, though the option has since been removed. Twenty One Pilots performing in 2012. 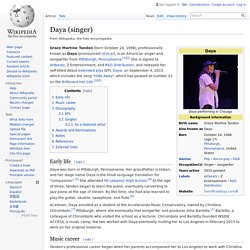 Maddie Ziegler. Early life Ziegler was born in Pittsburgh, Pennsylvania, to Melissa Ziegler-Gisoni and Kurt Ziegler, who owned a mortgage company.[5][6] She is of Polish, German and Italian descent.[7] Her parents divorced in 2011, citing the financial[8] and emotional toll that dance took on the family, and her mother married Greg Gisoni in 2013. 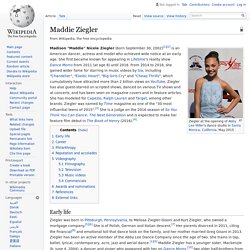 Ziegler has been an active member of the Abby Lee Dance Company since the age of two. She trains in tap, ballet, lyrical, contemporary, acro, jazz and aerial dance.[1][9] Maddie Ziegler has a younger sister, Mackenzie (b. June 4, 2004), a dancer and singer who appeared with her on Dance Moms,[10] two older half-brothers from her father's previous marriage, and two older step-siblings from the previous marriage of her step-father, Greg Gisoni, a vice-president at Westinghouse Electric Company.[6][9][11] Career Philanthropy Reputation and accolades Her ... jétés and pirouettes juxtapose self-containment with a sort of reckless abandon. Videography Filmography. The Satanic Verses. This article is about the novel. 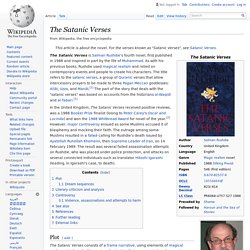 For the verses known as "Satanic Verses", see Satanic Verses. Plot[edit] The Satanic Verses consists of a frame narrative, using elements of magical realism, interlaced with a series of sub-plots that are narrated as dream visions experienced by one of the protagonists. The frame narrative, like many other stories by Rushdie, involves Indian expatriates in contemporary England. 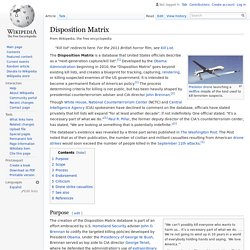 For the 2011 British horror film, see Kill List. The Disposition Matrix is a database that United States officials describe as a "next-generation capture/kill list".[1] Developed by the Obama Administration beginning in 2010, the "Disposition Matrix" goes beyond existing kill lists, and creates a blueprint for tracking, capturing, rendering, or killing suspected enemies of the US government. It is intended to become a permanent fixture of American policy.[1] The process determining criteria for killing is not public, but has been heavily shaped by presidential counterterrorism adviser and CIA director John Brennan.[2] Though White House, National Counterterrorism Center (NCTC) and Central Intelligence Agency (CIA) spokesmen have declined to comment on the database, officials have stated privately that kill lists will expand "for at least another decade", if not indefinitely.