Paradise Lost: The Poem. Lift Off. “Education then, beyond all other devices of human origin,Is a great equalizer of the conditions of men.” – Horace Mann, 1848.At the time of his remarks I couldn’t read — couldn’t write.Any attempt to do so, punishable by death.For generations we have known of knowledge’s infinite power.Yet somehow, we’ve never questioned the keeper of the keys —The guardians of information. 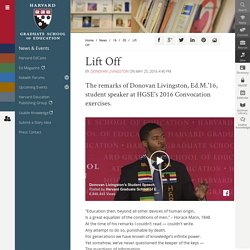 Unfortunately, I’ve seen more dividing and conqueringIn this order of operations — a heinous miscalculation of reality.For some, the only difference between a classroom and a plantation is time.How many times must we be made to feel like quotas —Like tokens in coined phrases? —“Diversity. Inclusion”There are days I feel like one, like only —A lonely blossom in a briar patch of broken promises.But I’ve always been a thorn in the side of injustice. Disruptive. Academyofamericanpoets.cmail2. “There is a girl inside” by Lucille Clifton. 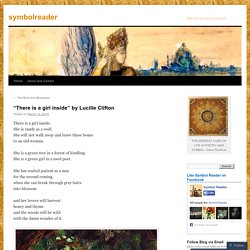 She is randy as a wolf. She will not walk away and leave these bones to an old woman. Gil Scott Heron - The Revolution Will Not Be Televised. The Light that Shines in Darkness. The New Age movement has given women more significance and more power of expression than art, science or politics of the last century. 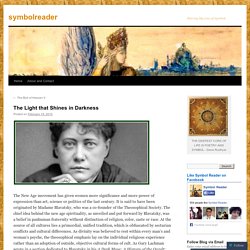 It is said to have been originated by Madame Blavatsky, who was a co-founder of the Theosophical Society. The chief idea behind the new age spirituality, as unveiled and put forward by Blavatsky, was a belief in panhuman fraternity without distinction of religion, color, caste or race. At the source of all cultures lies a primordial, unified tradition, which is obfuscated by sectarian conflicts and cultural differences. As divinity was believed to rest within every man’s and woman’s psyche, the theosophical emphasis lay on the individual religious experience rather than an adoption of outside, objective cultural forms of cult. 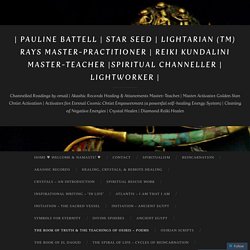 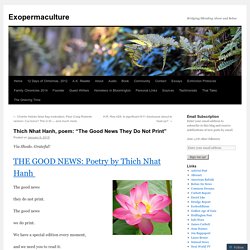 Grateful! On the 10th of December Ireland will Rise. The world is too much with us « The Charge of the Light Brigade. Walter Raleigh. “Evening” by Reiner Maria Rilke in Two Translations. I. 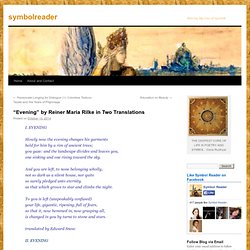 EVENINGSlowly now the evening changes his garments held for him by a rim of ancient trees; you gaze: and the landscape divides and leaves you, one sinking and one rising toward the sky.And you are left, to none belonging wholly, not so dark as a silent house, nor quite so surely pledged unto eternity as that which grows to star and climbs the night.To you is left (unspeakably confused) your life, gigantic, ripening, full of fears, so that it, now hemmed in, now grasping all, is changed in you by turns to stone and stars.translated by Edward SnowII. “Evening” is one of the most famous poems by Rilke. It is also a poem that I have always regarded as unbelievably, sublimely beautiful, expressing how we humans are torn between the simultaneous boundedness and unboundedness of existence.

Our substance consists both of the immense stars and of the perfect and silent stones. Our life, “gigantic, ripening, full of fears” is dramatically poised between the two. PoemHunter.Com - Thousands of poems and poets.. Poetry Search Engine. Poet Seers - Poem of the Day. THE NIGHT BY ALEXANDER SERGEYEVICH PUSHKIN. Awesome!: A Poem. Shane Koyczan - Poems. Shakespeare's Sonnets. Her Strange Angels: in search of stranger angels. The Complete poems of Edgar Allan Poe, by Edgar Allan Poe : A Dream Within a Dream. :zenhabits. Poetry: Poems by the classic masters.

Throwing Away the Alarm Clock by Charles Bukowski. Share my father always said, "early to bed and early to rise makes a man healthy, wealthy and wise. 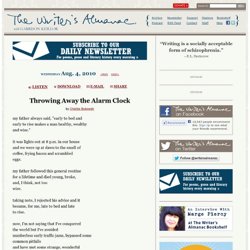 " it was lights out at 8 p.m. in our house and we were up at dawn to the smell of coffee, frying bacon and scrambled eggs. my father followed this general routine. SPIRITUALITY: Hafiz. Shakespeare's poems at AbsoluteShakespeare.com. William Shakespeare's poems are recognized by many as classics in the genre. 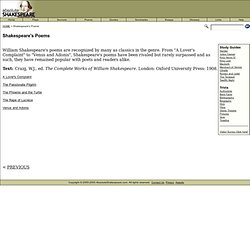 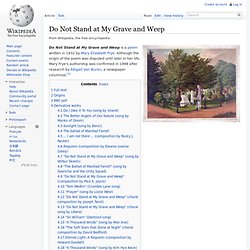 Although the origin of the poem was disputed until later in her life, Mary Frye's authorship was confirmed in 1998 after research by Abigail Van Buren, a newspaper columnist.[1] Full text[edit] Do not stand at my grave and weep, I am not there; I do not sleep. I am a thousand winds that blow,