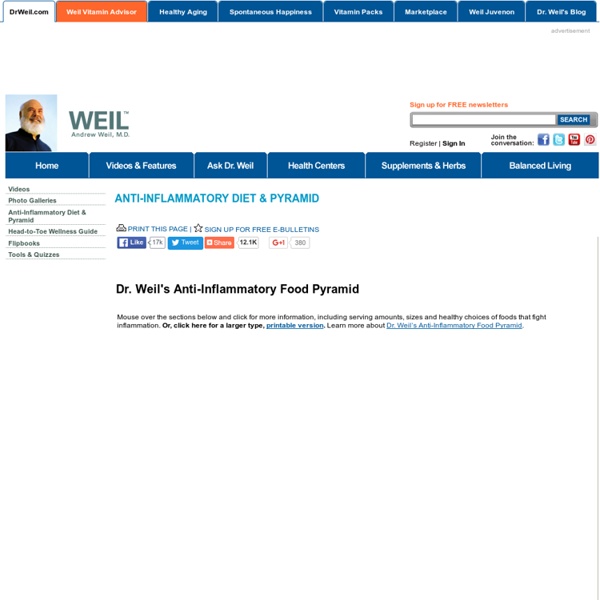 Mediterranean Diet Information & Vision Health The Mediterranean diet has been the subject of many research studies as well as general media articles. Many people think that it refers to the diet of the entire Mediterranean area, but northern Italy and other areas of the region use fats other than olive oil, some of which are saturated fats. The 2015 US food pyramid is very similar to the Mediterranean diet. Studies associate following the Mediterranean diet with lowered cardiovascular risk factors and lowered risk of advanced macular degeneration. Researchers have generally used an "alternate Mediterranean diet" in their eating assessments of various patient populations. Every Day Pure water. Vegetables & fruit. Grains. Beans, seeds & nuts are a fantastic source of antioxidants, fiber, protein, minerals, and B vitamins. Fresh herbs and spices contain many polyphenols, carotenoids and other phytonutrients (nutrients from plants) that provide valuable antioxidants, anti-inflammatory compounds, and micronutrients. Fats. Seafood. 1.

Why Calorie Counts Are Wrong: Cooked Food Provides a Lot More Energy | The Crux by Richard Wrangham, as told to Discover’s Veronique Greenwood. Wrangham is the chair of biological anthropology at Harvard University, where he studies the cultural similarities between humans and chimpanzees—including our unique tendencies to form murderous alliances and engage in recreational sexual activity. He is the author of Catching Fire: How Cooking Made Us Human. When I was studying the feeding behavior of wild chimpanzees in the early 1970s, I tried surviving on chimpanzee foods for a day at a time. About 25 years later, it occurred to me that my experience in Gombe of being unable to thrive on wild foods likely reflected a general problem for humans that was somehow overcome at some point, possibly through the development of cooking. To my surprise, some of the peer commentaries were dismissive of the idea that cooked food provides more energy than raw. Whether we are talking about plants or meat, eating cooked food provides more calories than eating the same food raw.

The Healing Foods Diet The HEALING FOODS diet is not just a diet; it’s a tool that will launch you into a total health transformation. This diet was designed to help anyone triumph over diseases like: Diabetes, Obesity, Heart Disease, Autism, Digestive disorders, Fatigue, Depression, Hormone imbalance, and Cancer prevention. The diet targets FIVE ASPECTS of your health to help you gain victory over any illness: Featured Download: The Healing Foods Diet (Download Now) Almost there! Enter your email to download this free guide right now. We hate SPAM and promise to keep your email address safe. Before You Go, Check Out My Upcoming Webinar: Strategies To Heal Leaky Gut and Overcome Adrenal And Thyroid Issues! Don't miss this FREE training Yes, Claim My FREE Spot Now! Decreases Inflammation – Most diseases today are due to inflammation. The Healing Foods Diet consists of eating equal amounts (33% each) of clean protein sources, healthy fats, and low glycemic carbohydrates in the forms of fruits and vegetables. 1. 2. 3.

Is It Really Safe to Give Babies Peanut Butter? For decades, scientists have been trying to figure out how to explain ballooning rates of food allergies and asthma. Peanut allergies, which now seem to plague elementary schools, have been particularly confounding. The incidence of peanut and tree nut allergies in the United States quadrupled in the past 13 years, according to The New England Journal of Medicine. Young children in the United States are now allergic at what scientists believe are unprecedented levels—that's food allergies generally, and peanut allergies specifically. Peanut allergy is the country's leading food-allergy cause of anaphylaxis and death. But what long seemed to be an inexplicable and growing threat now seems "extremely simple," said Scott Sicherer, a pediatrician and a researcher at the Jaffe Food Allergy Institute at Mount Sinai. There's now mounting evidence that Sicherer and his colleagues were right. "It does leave people with questions like, 'When is the best time to do this?'

What if It's All Been a Big Fat Lie? If the members of the American medical establishment were to have a collective find-yourself-standing-naked-in-Times-Square-type nightmare, this might be it. They spend 30 years ridiculing Robert Atkins, author of the phenomenally-best-selling ''Dr. Atkins' Diet Revolution'' and ''Dr. Atkins' New Diet Revolution,'' accusing the Manhattan doctor of quackery and fraud, only to discover that the unrepentant Atkins was right all along. When Atkins first published his ''Diet Revolution'' in 1972, Americans were just coming to terms with the proposition that fat -- particularly the saturated fat of meat and dairy products -- was the primary nutritional evil in the American diet. Atkins allowed his readers to eat ''truly luxurious foods without limit,'' as he put it, ''lobster with butter sauce, steak with béarnaise sauce . . . bacon cheeseburgers,'' but allowed no starches or refined carbohydrates, which means no sugars or anything made from flour.

Anti-inflammatory Food Principles - Hoffman Centre for Integrative & Functional Medicine It is now well established that food is far more than just the sum total of calories, macronutrients, micronutrients and phytonutrients. Food provides the key signaling switch for our genetic code. We ignore its extreme value and significance at our peril. The food you eat and the diet you follow is the key healing factor in your journey to wellness. Do not delegate the task of eating well and making food choices to other individuals in your family or workplace. In most cases, patients who do not take this stage of healing seriously and make radical changes will not succeed in their journey to optimal health. Good food choices involve more than just calories, macronutrients (i.e., protein, fats, and carbohydrates) and micronutrients, such as vitamins, minerals, and polyphenols/phytonutrients; food is converted into energy and information in the body. Supplements and further remedies are useless unless they are supported by a foundational healthy eating plan. Principles of Healthy Eating

22 Healthy Weeknight Recipes I left a screening of Michael Pollan's new film In Defense of Food—based off his 2008 book with the same name and airing on PBS on December 30th—feeling overwhelmed. Pollan's argument is that we don't need to jump on every hot dietary trend or study every piece of scientific literature: On the biological level, we know what to do ("Eat food, not too much, mostly plants," is how he sums it up) and we're actually bombarded with misinformation that persuades us to make harmful choices, often under the guise of health. But even if every individual has the innate programming to eat well, the problems are huge and systemic: They're cultural and corporate and socio-economic and evolutionary, and they're not going to be solved in a day (and Pollan says that the food movement is in need of litigators and community organizers, especially). In the meantime, what can we do? We can cook! But elaborate, time-consuming meals aren't realistic. 💬 View Comments (4) Share this Article Tweet this Article

New Research Shows Poorly Understood “Leaky Gut Syndrome” Is Real, May Be the Cause of Several Diseases Russian spy-watcher Andrei Soldatov on Snowden’s strange behavior in Russia, the Nemtsov assassination, and signs of a power struggle in Putin’s inner circle. Andrei Soldatov’s beat is Russian spies, which is a hot topic for a new cold war. As editor of agentura.ru, an online “watchdog” of Putin’s clandestine intelligence agencies, he has spent the last decade reporting on and anatomizing the resurrection of the Russian security state, from KGB-style crackdowns on dissent at home to adroit or haphazard assassinations abroad. Most recently, Soldatov and his coauthor and collaborator Irina Borogan broke serious news about the extent to which the Federal Security Service (FSB) was surveilling and eavesdropping on everyone within slaloming distance of the 2014 Sochi Winter Olympics. Weiss: You’ve no doubt seen the CNN report about Russian hackers infiltrating White House computers and obtaining President Obama’s personal schedule. What can you tell us about this operation? [Soldatov nods.]