Handwritten kanji search at sljfaq.org. About Japanese-to-English SFX Sound Effects Translations @ The JADED Network. A Step-By-Step Guide On How To Learn Hiragana - Tofugu. Japanese The Hard Way. “The problems of victory are more agreeable than those of defeat, but they are no less difficult.” – Winston Churchill Japanese is difficult. 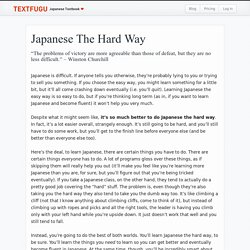 If anyone tells you otherwise, they’re probably lying to you or trying to sell you something. If you choose the easy way, you might learn something for a little bit, but it’ll all come crashing down eventually (i.e. you’ll quit). 9 Apps for Learning Japanese, the Soft Powerhouse  By Jack Flanagan There are plenty of reasons to learn Japanese. 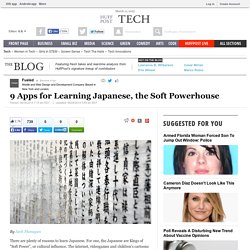 For one, the Japanese are Kings of "Soft Power", or cultural influence. The internet, videogames and children's cartoons are heavily influenced by the cute, cuddly touch of Japanese heritage. While some of this reaches us, it is only the tip of the iceberg. Plus, plenty of the nuances in Japanese culture are lost in translation. Even though Japan has taken a series of economic blows over the last few years, it remains the fourth largest economy worldwide (after the EU, U.S. and China) as well as home to major international corporations including Toyota, Mitsubishi, Nippon. Even the Lean Startup method, invented by Eric Ries as a structured approach to testing a startup idea, was inspired by Japanese auto manufacturers, which brought us to the "fail fast, fail often" mentality that defines startup technology hubs like San Francisco and London. 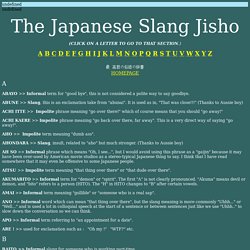 ABUNE >> Slang, this is an exclamation take from "abunai". It is used as in, "That was close!!! " ACHI ITTE >> Impolite phrase meaning "go over there! " ACHI KAERE >> Impolite phrase meaning "go back over there, far away". AHO >> Impolite term meaning "dumb ass". AHONDARA >> Slang, insult, related to "aho" but much stronger. AH SO >> Informal phrase which means "Oh, I see. Hiragana-chart.jpg (JPEG Image, 806 × 1051 pixels) - Scaled (95%) Hiragana Drag-n-Drop Exercise. The Ultimate Guide To Learning Katakana - Tofugu.

★ Japan Lover Me ★ www.japanlover.me. MARUGOTO Plus. Genki – Home. GENKI is a highly acclaimed series of integrated resources for learning elementary Japanese through a well-balanced approach to all four language skill areas—speaking, listening, reading, and writing. 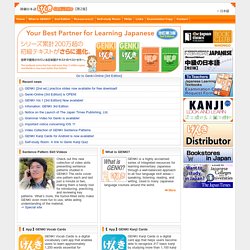 Used in many Japanese language courses around the world. Language. What kind of language is Japanese? 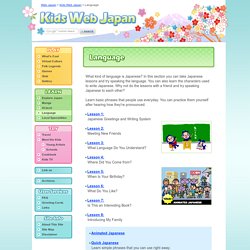 In this section you can take Japanese lessons and try speaking the language. You can also learn the characters used to write Japanese. Why not do the lessons with a friend and try speaking Japanese to each other? Learn basic phrases that people use everyday. You can practice them yourself after hearing how they're pronounced. How to Learn Japanese (Online & Free)【日本語の学習法】日英字幕. Glossary of Japanese gender and sex terminology - Nonbinary.org. Kanji lists ordered by JLPT-level, Grade or Frequency of use - Kanjicards.org. Skip to main content. 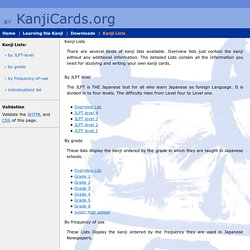 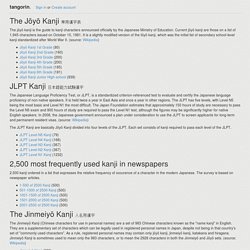 Current jōyō kanji are those on a list of 1,945 characters issued on October 10, 1981. It is a slightly modified version of the tōyō kanji, which was the initial list of secondary school-level kanji standardized after World War II. (source: Wikipedia) 日本語 ・ 中文 log. Tae Kim's Guide to Learning Japanese. Erin's Challenge! I can speak Japanese. Nihonshock. Anki - friendly, intelligent flashcards. 100 top resources to learn Japanese. 741 Flares6250116×741 Flares We find ourselves often giving recommendations of products to learn Japanese with, and we thought it’d be useful to compile a list for your reference. 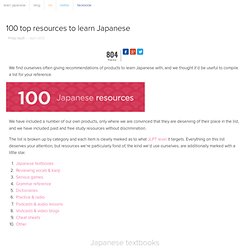 We have included a number of our own products, only where we are convinced that they are deserving of their place in the list, and we have included paid and free study resources without discrimination. The list is broken up by category and each item is clearly marked as to what JLPT level it targets. Everything on this list deserves your attention, but resources we’re particularly fond of, the kind we’d use ourselves, are additionally marked with a little star. Japanese textbooks Our very own textbook. Probably the most popular Japanese textbook, published by The Japan Times, is well worth its reputation. You can think of this textbook as Genki III. Another good intermediate-advanced textbook. Links for Studying Japanese Online. There are so many resources on the Internet for studying Japanese! 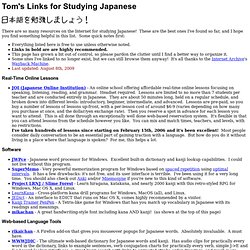 These are the best ones I've found so far, and I hope you find something helpful in this list. Some quick notes first: Everything listed here is free to use unless otherwise noted. Links in bold are are highly recommended. This page has grown a bit out of control, so please pardon the clutter until I find a better way to organize it. Japanese Lessons, free text/audio downloads. ちまたの日本語-“Real World”Japanese. TextFugu Online Japanese Textbook. Teaching reading IS rocket science - Louisa Moats Before you start reading, and before you start writing, you’re going to learn how to pronounce nearly all the “sounds” of the Japanese language. 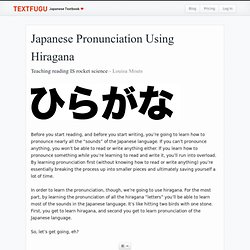 If you can’t pronounce anything, you won’t be able to read or write anything either. Denshi Jisho - Online Japanese dictionary. Renshuu.org - Japanese studying made for you! Genki – Self-study Room. Self-study Room offers a variety of online materials to support your learning with Genki textbooks. *external links (Notice)If your computer is experiencing difficulties reading the scripts on this site, change the text code to “Japanese (Shift_JIS)” or “Automatic”. Culture Note Video Clips for Culture Note Video clips related to “Culture Note” columns in the Dialogue & Grammar section of Genki. Romaji to Hiragana and Katakana converter.