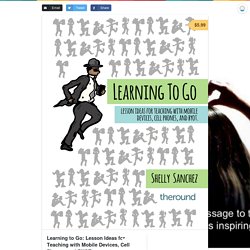 Our students spend hours with their devices and digital tools. Imagine if some of that time was spent learning your content. Digital Research. Google Tools. Peer Editing. Podcasts & Audio Projects. Creating Audio Tasks and Projects with Learners. 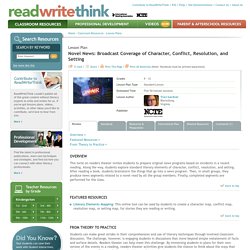 If you've got lessons plans, videos, activities, or other ideas you'd like to contribute, we'd love to hear from you. More Find the latest in professional publications, learn new techniques and strategies, and find out how you can connect with other literacy professionals. More Teacher Resources by Grade Your students can save their work with Student Interactives. More Home › Classroom Resources › Lesson Plans Lesson Plan Overview Featured Resources From Theory to Practice This twist on readers theater invites students to prepare original news programs based on incidents in a recent reading.

Radio Days - Broadcast Journalism and Historical Events. The workspace for your life’s work. A project of the Asian American Journalists Association. The Pirate Ship Year-end Edition 2013-14 by London High School Journalism. Titans' Digest - May Issue - Slipp by TitansDigest - Slipp.it. I also enjoy taking in the natural beauty of the land (Cloud Catcher Canyon in Azerbaijan, for example, or Yosemite & Bryce Canyon National Park in the US) and exploring the magnificent architecture of a place (The Taj Mahal, Ahambra Palace, The Great Wall of China, Abu Simbel Temple, The Colosseum, The Parthenon, Angkor Wat, Sydney Opera House, Bibi-Khanym Mosque)… What was the most unforgettable or amazing thing you have seen during your travels? 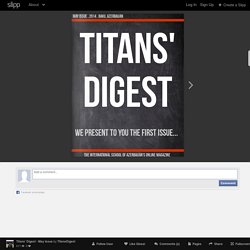 Amazing as in...nature ? The ice sculptures in Antarctica are breathtaking - absolutely unbeatable in beauty. Iguazu Falls in Argentina and Brazil is larger than life - it’s a spiritual experience to visit that magnificent place. And a hot air balloon ride over Cappadocia highlights the stunning rock spires there. Math in the News. This is the archive of our "Math in the News" current events weekly series. 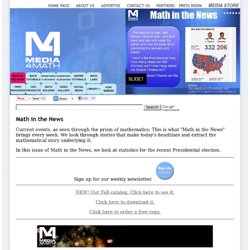 These presentations can be viewed as PowerPoint presentations from Slideshare, as videos from YouTube, or as iPad-compatible presentations. Click on the appropriate link to see the Math in the News presentation. Math in the News: 2/25/13. n this issue of Math in the News we look at statistics related to Russian meteor that recently crash-landed. Watch some compelling eyewitness video and explore how the path of meteor was reconstructed. The presentation also includes links to the following Web Sites: Breaking News English Lessons: Easy English News. No Edit Audio Podcasting. Talking Tom & Ben News. English news and easy articles for students of English. Time For Kids. BBC Learning English - News Report.

Here’s a tip for learning English. 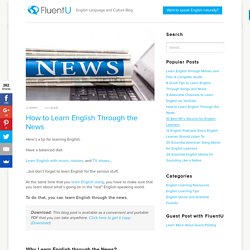 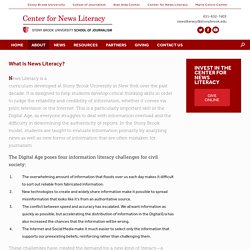 It is designed to help students develop critical thinking skills in order to judge the reliability and credibility of information, whether it comes via print, television or the Internet. This is a particularly important skill in the Digital Age, as everyone struggles to deal with information overload and the difficulty in determining the authenticity of reports. In the Stony Brook model, students are taught to evaluate information primarily by analyzing news as well as new forms of information that are often mistaken for journalism. The Digital Age poses four information literacy challenges for civil society: These challenges have created the demand for a new kind of literacy—a literacy that empowers news consumers to determine whether information is reliable and then act on it.

Lots Of New Resources On Teaching & Learning About “Fake News” More Resources For Teaching & Learning About “Fake News” Teaching Resources On Fake News – Part Three. Battling Fake News in the Classroom. In this post-election period, there has been a lot of discussion about fake news, particularly about how it is spread and shared online, and whether it influenced the recent presidential election. How to identify fake news. A generic classroom activity for dealing with fake news — ICT & Computing in Education. Fake News, Willful Ignorance and Critical Thinking – The Virtual Pedagogue. Against the much maligned backdrop of contemporary higher education a bright light has been trained on the problem of fake news. 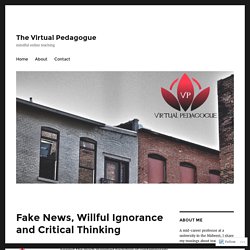 Critical thinking is hot right now, suddenly spoken of as an urgent necessity rather than an abstract or faraway good. Those of us who’ve long been worried about folks’ capacity for basic reasoning and factual discrimination are justified in feeling newly energized. It has been confirmed, we are told, that many Americans cannot tell the difference between fact and fiction. Democracy is in danger and we must commit to developing students’ critical thinking skills with renewed vigor.

A philosopher by training, I’m grumpier than many about the ubiquity of poor thinking skills. For one thing, I noticed that many who failed to distinguish between this or that fact also couldn’t appreciate the more general differences between fact and fiction. Like this: A worrying aspect of the fake news problem — ICT & Computing in Education. About half of the latest issue of my newsletter, Digital Education, concerned 'fake news'. 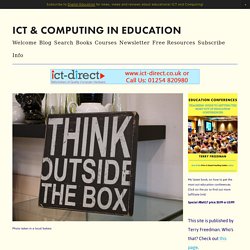 I have been reading quite a lot of research about it, both here and in the USA, and summarised the main points as best I could. (To read it yourself, along with copious references and suggestions for further reading, sign up to the newsletter: it's free.) What really stood out for me is not simply the finding that many people use social media as a source of news, or in some cases there only source of news. The Smell Test: Educators can counter fake news with information literacy. Here’s how. Illustration by Steve Brodner Discerning fact from fiction in news and online content has never been more challenging. 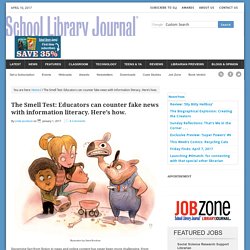 From “pizzagate”—false reports of a child sex ring operating in a DC pizza parlor—and creepy clown attacks to retweeted election headlines touting events that never happened, fake news is rampant. Twenty-three percent of Americans say they have shared fabricated reports, knowingly or not, according to a December Pew Research Center report. Librarians have an opportunity to take leadership in the current crisis. Compare Newspaper Coverage of Brown v. Board Ruling - NewseumED. May 16, 2016 Background One hundred and twenty years ago, on May 18, 1896, the Supreme Court ruled in the case of Plessy v. 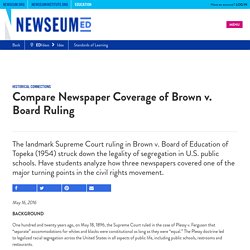 Ferguson that “separate” accommodations for whites and blacks were constitutional as long as they were “equal.” The Plessy doctrine led to legalized racial segregation across the United States in all aspects of public life, including public schools, restrooms and restaurants. The ruling would stand until almost exactly 58 years later, when the Supreme Court ruled in Brown v. Teach Your Students to Analyze Primary Sources - NewseumED. NewseumED.org offers hundreds of historic front pages, documents and videos to complement classroom studies and help with research.

The EDTools section allows for users to search by topic, century, information source, and more. Read original coverage of the Women’s Rights Convention in Seneca Falls, N.Y. (1848), The Yalta Conference (1945), Martin Luther King’s Call to Action from Birmingham jail (1963). A zoom tool allows you to read every word on the page.

Teach Your Students to Analyze Primary Sources - NewseumED. Many Americans Believe Fake News Is Sowing Confusion. In the wake of the 2016 election, everyone from President Obama to Pope Francis has raised concerns about fake news and the potential impact on both political life and innocent individuals. Some fake news has been widely shared, and so-called “pizzagate” stories led a North Carolina man to bring a gun into a popular Washington, D.C. pizza restaurant under the impression that it was hiding a child prostitution ring. According to a new survey by Pew Research Center, most Americans suspect that made-up news is having an impact.

About two-in-three U.S. adults (64%) say fabricated news stories cause a great deal of confusion about the basic facts of current issues and events. This sense is shared widely across incomes, education levels, partisan affiliations and most other demographic characteristics. These results come from a survey of 1,002 U.S. adults conducted from Dec. 1 to 4, 2016. The Honest Truth about Fake News … and How Not to Fall for It (with Lesson Plan) Did you hear that Pope Francis endorsed Donald Trump for president? Or that Hillary Clinton sold weapons to ISIS? Crazy, right? And … 100 percent false. But if you were one of the millions of people drawn to a bogus headline in your Facebook feed — or other social media platform of choice — and found yourself reading an article on what seemed like a legitimate news site (something like, say, The Political Insider, which “reported” the Clinton-ISIS story), then why wouldn’t you believe it?