Minecraft: Education Edition. Wiki. Home. Minecraft and Game Based Learning. Teaching with MinecraftEdu. Since late 2011, MinecraftEdu has made its way to thousands of classrooms around the world. 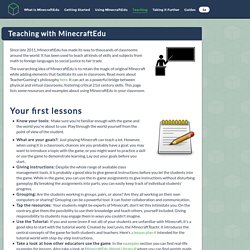 It has been used to teach all kinds of skills and subjects from math to foreign languages to social justice to fair trade. The overarching idea of MinecraftEdu is to retain the magic of original Minecraft while adding elements that facilitate its use in classroom. Read more about TeacherGaming's philosophy here. It can act as a powerful bridge between physical and virtual classrooms, fostering critical 21st century skills. This page lists some resources and examples about using MinecraftEdu in your classroom. Your first lessons Know your tools: Make sure you’re familiar enough with the game and the world you’re about to use. Lesson Examples MinecraftEdu has been used by thousands of teachers all around the world. Mods and Curricula qCraft (Quantum Mechanics) ComputerCraft (video)(Computer Programming) Galacticraft (Space Science) CustomNPCs (Cross Curricular) 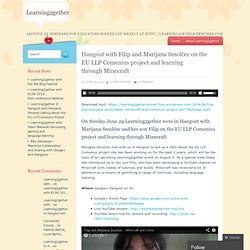 Minecraft. How Videogames Changed the World - Sat 30th Nov, C4, 9pm. Beyond Minecraft: Games That Inspire Building and Exploration. By Tanner Higgin, Graphite The success and popularity of Minecraft in and out of classrooms is no surprise. 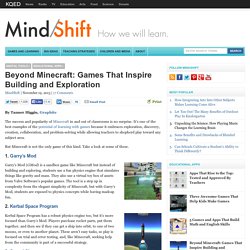 It’s one of the best examples of the potential of learning with games because it embraces exploration, discovery, creation, collaboration, and problem-solving while allowing teachers to shepherd play toward any subject area. But Minecraft is not the only game of this kind. Take a look at some of these. 1. Garry’s Mod (GMod) is a sandbox game like Minecraft but instead of building and exploring, students use a fun physics engine that simulates things like gravity and mass. 2. Kerbal Space Program has a robust physics engine too, but it’s more focused than Garry’s Mod. 3. Sound Shapes is a visually stunning platform puzzle game set to a rich musical soundscape. Why Minecraft may well be one of the best games for language learning - ELT Sandbox. Minecraft and (Language) Learning on Pinterest. Breaking the Learning Blocks - A Review of my #VRT Session on #Minecraft - ELT Sandbox. Storycraft: Using the world of Minecraft as inspiration for writing - ELT Sandbox.

SnakeGaming12. The Minecraft Teacher. Back to school. 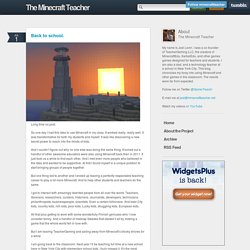 Long time no post. So one day I had this idea to use Minecraft in my class. It worked really, really well. It was transformative for both my students and myself. It was like discovering a new secret power to reach into the minds of kids. And I couldn’t figure out why no one else was doing the same thing. But one thing led to another and I ended up leaving a perfectly respectable teaching career to play a lot more Minecraft. I got to interact with amazingly talented people from all over the world. All that plus getting to work with some wonderfully Finnish geniuses who I now consider family. But I am leaving TeacherGaming and sailing away from Minecraft’s blocky shores for a while. I am going back to the classroom. Blackboard Collaborate. Blackboard Collaborate. Minecraft in education. Minecraft can be an educational tool that facilitates cooperation and teamwork among players. 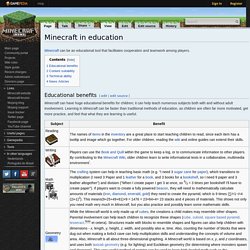 Educational benefits[edit | edit source] Resources - Minecraft in Education. Minecraft Wiki:Projects/Minecraft in education/Minecraft Vocabulary. Community Library for minecraft. Minecraft Makes You Think. For the past few years my kids have been under the Minecraft spell. 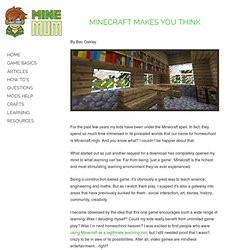 In fact, they spend so much time immersed in its pixelated worlds that our name for homeschool is Minecraft High. And you know what? I couldn’t be happier about that. What started out as just another request for a download has completely opened my mind to what learning can be. Far from being ‘just a game’, Minecraft is the richest and most stimulating learning environment they’ve ever experienced.

Being a construction-based game, it's obviously a great way to teach science, engineering and maths. I became obsessed by the idea that this one game encourages such a wide range of learning. So I ran it up the flagpole against one of the most commonly used frameworks for setting learning objectives in schools and universities. Sean Fay Wolfe. Beyond Minecraft: Games That Inspire Building and Exploration.

SIXTY SEVEN Minecraft activities for learning, all FREE! Duncan bilingual: Minecrafting our Learning Space. Crafty Ways to Use Minecraft at School. Maybe your child is one of the thousands hooked on Minecraft, a video game that lets players build with textured cubes in a virtual 3D world. 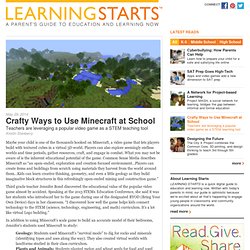 Players can also explore seemingly endless worlds and time periods, gather resources, craft, and engage in combat. What you may not be aware of is the inherent educational potential of the game. Common Sense Media describes Minecraft as “an open-ended, exploration and creation focused environment…Players can create items and buildings from scratch using materials they harvest from the world around them…Kids can learn creative thinking, geometry, and even a little geology as they build imaginative block structures in this refreshingly open-ended mining and construction game.” Third grade teacher Jennifer Bond discovered the educational value of the popular video game almost by accident. Minecraft in Education - Minecrafter Camp. 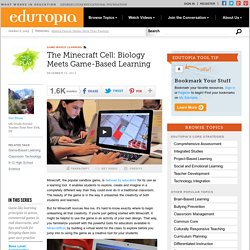 It enables students to explore, create and imagine in a completely different way than they could ever do in a traditional classroom. The beauty of the game is in the way it unleashes the creativity of both students and teachers. But for Minecraft novices like me, it's hard to know exactly where to begin unleashing all that creativity. If you're just getting started with Minecraft, it might be helpful to use the game in an activity of your own design. That way, you familiarize yourself with the powerful tools for educators available in MinecraftEdu by building a virtual world for the class to explore before you jump into to using the game as a creative tool for your students. This semester, I used Minecraft for the first time in my ninth grade science class at Quest to Learn. Step 1: Define the Learning Goals Step 2: Create the Mechanics and Build the Virtual World Step 3: Focus the Exploration. Minecraft Teachers. How Microsoft can use Minecraft to build its education strategy.

Educators had the right to feel a little freaked out about Microsoft’s announcement that it was acquiring Minecraft maker Mojang. 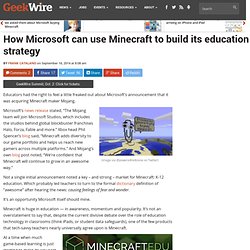 And Mojang’s own blog post noted, “We’re confident that Minecraft will continue to grow in an awesome way.” Not a single initial announcement noted a key – and strong – market for Minecraft: K-12 education. Which probably led teachers to turn to the formal dictionary definition of “awesome” after hearing the news: causing feelings of fear and wonder. It’s an opportunity Microsoft itself should mine.