Google Tools for Teachers. Google Tools. My List: A Collection on "Googletools" (Google,apps,tools,for,education) 10 Tips & Ideas for Using Google Plus with Learners. For Education: Meet Local Educators. Vance Stevens live-streams workshop on Hangout on Air at GloCALL Ahme… Hangouts. Hangout On Air controls (as of sep 9, 2014) Get set to Hangout: How to participate in INN530 class Hangouts. Hanging Out With Google Plus. Mobile. Apps for Education. Introducing Classroom for Google Apps for Education. Helpouts by Google. 32 Tips for Hosting a Successful Hangout with Your Students. Stay in touch on your iPhone and iPad.

Google Plus - UW Google Apps - eLearning - UWB Learning Technologies - UW Bothell. Google+ is a social collaboration tool that lets you both collaborate and network with others. 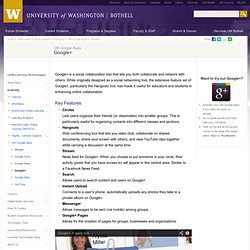 While originally designed as a social networking tool, the extensive feature set of Google+, particularly the Hangouts tool, has made it useful for educators and students in enhancing online collaboration. Key Features Circles Lets users organize their friends (or classmates) into smaller groups. This is particularly useful for organizing contacts into different classes and sections. Hangouts Web conferencing tool that lets you video chat, collaborate on shared documents, share your screen with others, and view YouTube clips together while carrying a discussion at the same time. Using Google+ in Higher Ed There are many different ways Google+ could be used among students, faculty and staff in higher education.

Uses for faculty: Use circles to organize students and TAs by class. Uses for students: Connect with classmates, separate them by course. Preparing Your Class for GooglePlus. Monday marks the first day of the intersession course that will include Google Plus integration. 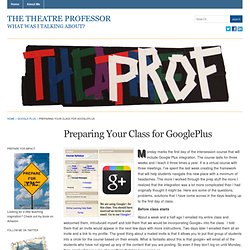 The course lasts for three weeks and I teach it three times a year. It is a virtual course with three meetings. I’ve spent the last week creating the framework that will help students navigate this new place with a minimum of headaches. The more I worked through the prep stuff the more I realized that the integration was a lot more complicated than I had originally thought it might be. Here are some of the questions, problems, solutions that I have come across in the days leading up to the first day of class. Before class starts. 10 ways to use Google Plus in the classroom. Circles Obviously you are going to want to create a circle for your class and guide them through making a circle for the class as well. 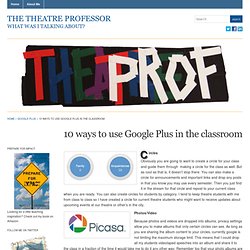 But as cool as that is, it doesn’t stop there. You can also make a circle for announcements and important links and drop any posts in that you know you may use every semester. Then you just find it in the stream for that circle and repost to your current class when you are ready. You can also create circles for students by category. Photos/Video Because photos and videos are dropped into albums, privacy settings allow you to make albums that only certain circles can see.

Google Plus Made My Students Say More. I didn’t get it at first, but I’m an experimenter so I persisted. 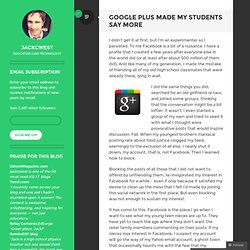 To me Facebook is a bit of a nuisance. I have a profile that I created a few years after everyone else in the world did (or at least after about 500 million of them did). And like many of my generation, I made the mistake of friending all of my old high school classmates that were already there, lying in wait. I did the same things you did; searched for an old girlfriend or two, and joined some groups, thinking that the conversation might be a bit loftier. It wasn’t. Blocking the posts of all those that I did not want to offend by unfriending them, re-invigorated my interest in Facebook for a while – even if only because it satisfied my desire to clean up the mess that I felt I’d made by joining this social network in the first place.

It has come to this: Facebook is the place I go when I want to see what my young teen nieces are up to. While I don’t get Facebook, I do understand curation. At first, it was awkward. Badge - Google+ Platform. Badge types Because Google+ pages, profiles, and communities are different, we offer slightly different versions of the badges: Profiles Allow people to easily find you on Google+ and add you to a circle directly from your website. 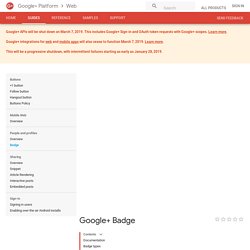 Pages Includes the profile badge features and adds some additional functionality. Google+ Google+ (pronounced and sometimes written as Google Plus /ˈɡuːɡəl plʌs/) is a social networking and identity service[3][4] that is owned and operated by Google Inc. 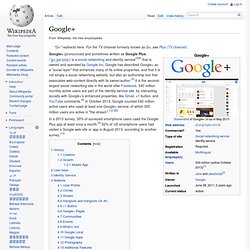 Google has described Google+ as a "social layer" that enhances many of its online properties, and that it is not simply a social networking website, but also an authorship tool that associates web-content directly with its owner/author.[5] It is the second-largest social networking site in the world after Facebook. 540 million monthly active users are part of the Identity service site, by interacting socially with Google+'s enhanced properties, like Gmail, +1 button, and YouTube comments.[6] In October 2013, Google counted 540 million active users who used at least one Google+ service, of which 300 million users are active in "the stream".[1][7][8] History[edit] Creation[edit] Growth[edit] Mobile App[edit] User base[edit] Get the most out of Google+ - Google+ Eventos Planeje sua próxima reunião com os Eventos e reviva as lembranças com as fotos de todos em um só lugar. 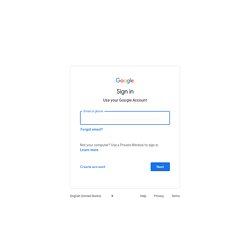 Saiba mais sobre os Eventos. Local Veja comentários sobre os lugares de que você gosta, de pessoas nas quais você confia. Share and discover, all across Google - Google+ A quick guide to Google Plus. The below post is from just after Google+ was launched and still is a very useful piece about Google+.

Also be sure to read about What Google+ Really is all About, How To Become That Suggested User on Google+ and The Complete Google Plus Cheat Sheet or take a look at all the Google+ posts we have here on State of Search! Google + has arrived and pretty much every SEO I know are already on it. Yesterday was probably a complete waste of a day for most SEOs as pretty much everyone was busy playing with Google +. I was no exception. In the words of Matt Cutts: “It’s like crack, but in a good way”. So I’ve spent some time going through the current key features to give you a “crash course” in Google +: Circles This is the major functionality that although initially looks just like facebook friends, differ in one important area; categorisation! Photos When you upload photos you get asked to create a new album or add to an existing album. Hangouts Instant Photo Upload from Mobile Sparks Huddle. Google Plus resigned, updated with 41 new features. Generate a Google-Plus - RSS-Feed. Manage Entries.