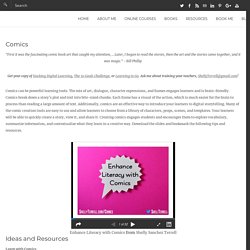 Later, I began to read the stories, then the art and the stories came together, and it was magic. " - Bill Phillip. Comics for Engaging Students! 24+ Resources & Ideas. “At a young age, I was interested in comic books, which was really how I learnt to read.” – Nicolas Cage Today, I will be conducting a webinar, Teaching with Comics, for Simple K12. 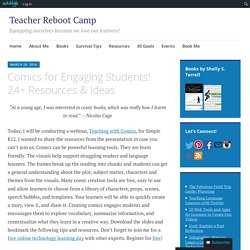 I wanted to share the resources from the presentation in case you can’t join us. Comics can be powerful learning tools. They are brain friendly. Teaching with Comics! Tools & Apps. 20+ Tips and Resources to Engage Learners with Comics. Fun Learning with Comics! 10+ Tools, Apps, Ideas & Resources. Word Origin Comics: What's Trending? Being in the Flow of Things. Are you up on the latest? 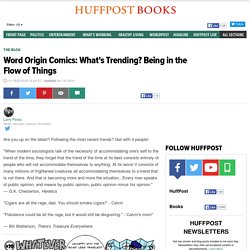 Following the most recent trends? Get with it people! "When modern sociologists talk of the necessity of accommodating one's self to the trend of the time, they forget that the trend of the time at its best consists entirely of people who will not accommodate themselves to anything. At its worst it consists of many millions of frightened creatures all accommodating themselves to a trend that is not there. And that is becoming more and more the situation...Every man speaks of public opinion, and means by public opinion, public opinion minus his opinion "Cigars are all the rage, dad. 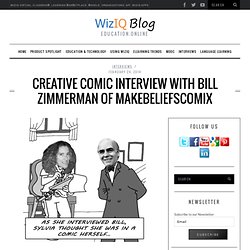 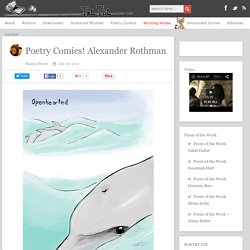 Alexander Rothman Bianca StoneJuly 26, 2012 Tweet To get free latest updates, just sign up here Bianca Stone Bianca is a poet and artist, and is the author of the chapbook Someone Else's Wedding Vows from Argos Books. View all contributions by Bianca Stone. The Comic Book Project. Worldcomics. Spin, Weave, and Cut.

Grammarman comics online. "Imagine" By John Lenon - A Web-Comic. Girl Power Science Squad. One of my comic strips was coming due with the theme of "Apples" --- sometimes, I have no idea where to go with it. 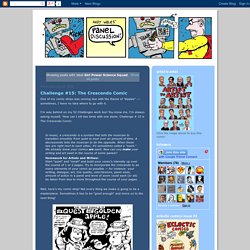 I'm way behind on my 52 Challenges work too! You know me, I'm always asking myself, "How can I kill two birds with one stone. Challenge # 15 is The Crescendo Comic: In music, a crescendo is a symbol that tells the musician to transition smoothly from quiet to loud over an amount of time. A decrescendo tells the musician to do the opposite. Brightly Wound: A webcomic of physics, astronomy, math, and grammar. The Amazing Adventures of the Comic-Book Dissertator. If a picture is worth a thousand words, Nick Sousanis likes to joke, his dissertation has exceeded the standard length and then some.

Sousanis, a sixth-year doctoral candidate in interdisciplinary studies at Columbia University’s Teachers College, gets to deliver that line a lot. He is, after all, doing something pretty gutsy with his academic opus: completing the whole thing in comic-book form. A quick glance at his dissertation—“Unflattening: A Visual-Verbal Inquiry Into Learning in Many Dimensions”—makes clear that it’s a stark deviation from the traditional, oft-expected monograph. Flip to one page, and you’ll find a series of intricately drawn eyeballs interspersed with a quote from Mikhail Bakhtin about “our own monolithic and closed world.” Turn to another, and you’ll see a rendering of a human face, slightly submerged in water, alongside several notes about the concept of immersion.

It’s a question more and more academics are asking. But does it serve the scholars themselves? Classical Music Is Boring - Comic strip about music, philosophy, and other unfashionable things. Music Theory for Musicians and Normal People. Howtoons. Ice Cream. Tap Into The World Of Comics #2:Comic Version. Free Comics Online. Comics & Graphic Novels - Books Downloads. Comics. Once considered only child's fare, comics have emerged as a genre worthy of serious study and application. 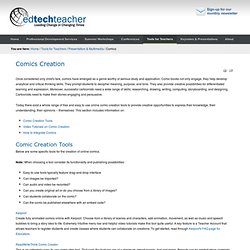 Comic books not only engage, they help develop analytical and critical-thinking skills. They prompt students to decipher meaning, purpose, and tone. They also provide creative possibilities for differentiated learning and expression. Comics - Ideas for the Lesson on Pinterest. Digital Storytelling 4 Kids 2013 - Filed under 'comic' Sharing Stories Through Comics on Pinterest. The Comic Book Periodic Table of the Elements. Comic Tools and Lesson Ideas. Visual instruction combined with text is a powerful learning tool. 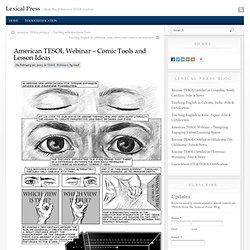 What Fun! Comics for Learning. Drawing Words Writing Pictures. Geologist. DigitalStorytelling4Kids [licensed for non-commercial use only] / Week2. Week 2: Sharing Stories through Comics During this week, participants will become familiar with web tools to create comics with young learners.learn how to create comic stories with these tools.reflect on the use of comics in the classroomexplore ways to integrate comics in their classroom in ways that improve reading and writing skills of learnersdiscover mobile apps for creating comicscreate a comic using one of the tools from this week Task 1, Day 1: How can we use comics in storytelling with young learners? 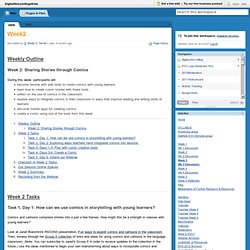 Comics and cartoons compress stories into a just a few frames. How might this be a strength in classes with young learners? Look at Janet Bianchini's RSCON3 presentation, Fun ways to exploit comics and cartoons in the classroom. Select one of the ideas that appeals to you and share it in our DigiKids EVO Edmodo Group. 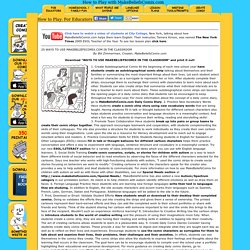 Their instructor, Tamara Kirson, was named The New York Times 2009 ESOL Teacher of the Year. To see her lesson plan click here. Comics and Cartoons. Randy Glasbergen - Today's Cartoon. Education Cartoons by Randy Glasbergen. My Education Cartoons are available at budget-friendly rates for magazines, newspapers, books, presentations, newsletters, websites, social media, greeting cards, advertising, calendars, textbooks, any kind of print or electronic media. To use a cartoon from my website, please contact me for authorization and a rate quote. (Click any image below to enlarge gallery) The cartoons on this site are copyrighted by Randy Glasbergen and may not be used for any purpose without permission.

Education cartoons by Randy Glasbergen. 26 Ways to Use Comics in the Classroom and 5 Free Tools for Creating Comics. One of the most popular posts that I've published on Free Technology for Teachers is a list of ten free tools for creating comics online. I wrote that post three years ago. Since then some of the tools have gone offline or started charging users. So I think it's time to share a new list.

Here are five free tools for creating comics online. Comic Master is a free tool designed for students to use to create comics in the "graphic novel style" that is popular with a lot of kids in the ten to fourteen years old age range. Comic Strips for Learning. Comics for kids. "Imagine" By John Lenon - A Web-Comic. Kids Comics. 10 Kid Comics for Early Readers. When a child is just learning to read, comics can be a great supplement to help foster love and enjoyment for books. As detailed in this wonderful handout, “Raising a Reader,” from the Comic Book Legal Defense Fund, comics have a lot to offer young readers.

For that crucial first stage of early reading (ages 5-8, grades K-2), though, it can be hard to find appropriate comic book reading material. Many parents will either disregard comic books as a reading option or assume that any old superhero comic will do. The appropriate range of choices for this specific age group and reading level is actually pretty narrow, but it contains some fabulous picks. I’ve put together a list of 10 great choices to consider giving your early reader. 1. KidSites.com - Comic Sites for Kids. Aford T. Comic Strip Creator - Make comics with Chogger. MAKE BELIEFS COMIX! Online Educational Comic Generator for Kids of All Ages. Toondoo. Creaza. Creaza Cartoonist. Comics Head iOS Android App. Comic Tools & Resources. FriendStrip. Storyboard That - The Internet's Best Storyboard Creator.